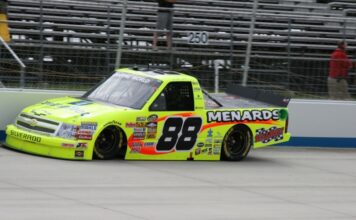 Sandusky, Oh. (November 29, 2011) – ThorSport Racing, the longest-tenured NASCAR Camping World Trucks (NCWTS) team with entries since 1996, announced today their 2012 expansion plans – to include a partnership with TRD, U.S.A. (Toyota Racing Development). After a successful 2011 season in the NCWTS, with three wins and four poles between two veteran drivers – Johnny Sauter and Matt Crafton – and debut of rookie Dakoda Armstrong; the organization is hiring in its state of the art facility in Sandusky, Ohio for the No. 44 ARCA Racing Series team of Frank Kimmel.

“We’d like to thank everyone at Chevrolet for all the support over the last 16 years,” said Matt LaNeve, vice president of motorsports partnerships for ThorSport Racing. “ThorSport Racing, along with dedicated owners Duke and Rhonda Thorson, have a long-standing history and commitment to conservative, steady growth within NASCAR. Toyota’s business and competitive philosophies are in line with our 2012 goals for both Frank Kimmel, as he pursues his 10th ARCA Racing Series Championship; and our NCWTS teams of the 13, 88 and 98, as we further look to increase competition. We are aggressively chasing not only wins in our two respective series, but championship trophies for our drivers and sponsors.”

ThorSport Racing currently operates three NCWTS teams – the No. 13 of Johnny Sauter; the No. 88 of Matt Crafton; and the No. 98 of Dakoda Armstrong. The organization will also field the No. 44 Ansell/Menards Toyota Camry during the 2012 ARCA Racing Series presented by Menards season. The No. 13 Safe Auto/Curb Records entry finished second in driver championship points in 2011, matching the organization’s highest previous finish by the No. 88 Menards entry and Matt Crafton in 2009 – narrowly missing the championship by six points but capping the year off with a win at Homestead-Miami Speedway on November 18th; adding to driver Sauter’s win list, shared with a trophy clock at Martinsville earlier in the year. The No. 88 Menards entry, piloted by Matt Crafton, finished 8th in overall driver championship points, earned two poles and wheeled into Victory Lane at Iowa Speedway during the 2011 season.

“ThorSport Racing is a first-class organization and a championship-caliber race team, as well as one of the most respected teams in the NASCAR Camping World Truck Series,” said Lee White, president and general manager of TRD, U.S.A.(Toyota Racing Development).   “We look forward to working together with the entire ThorSport race team and are confident that it will raise the level of our entire Toyota Tundra racing program.”

“We’re always on the forefront of competition in whatever series we are competing in,” said David Pepper, Director of Competition and Team Manager for ThorSport Racing. “We’re looking forward to forging ahead with Toyota in the competition arena in 2012. We’re actively hiring top talent to our existing crew members on our championship-caliber teams. We’re encouraged, during a down economy in both the country and in racing, to be hiring and adding jobs back into our industry.”

ThorSport Racing has wheeled into Victory Lane with Terry Cook, Matt Crafton and Johnny Sauter since its inception and has finished a dominating eight times within the top 10 in points with both trucks. Sauter wheeled into Victory Lane twice in 2011 – Martinsville and Homestead-Miami; Crafton in Iowa. Both earned two poles, respectively. In 2011, ThorSport Racing matched its highest previous driver points finish by Matt Crafton and the No. 88 in 2009 – with the No. 13 of Johnny Sauter. In 2009 and 2010, both Crafton and Sauter finished in the top five in driver points. ThorSport Racing operates in a state-of-the-art, world-class 100,000 square foot racing facility in Sandusky. For more information, visit us on Facebook: Facebook/ThorSportRacing or Twitter: Twitter.com/ThorSportRacing

Toyota Motor Sales (TMS), U.S.A., Inc. is the marketing, sales, distribution and customer service arm of Toyota, Lexus and Scion. Established in 1957, TMS markets products and services through a network of nearly 1,500 Toyota, Lexus and Scion dealers which sold more than 1.76 million vehicles in 2010. Toyota directly employs nearly 30,000 people in the U.S. and its investment here is currently valued at more than $18 billion.  For more information about Toyota, visit www.toyota.com, www.lexus.com, www.scion.com or www.toyotanewsroom.com.

In this week's interview, Speedway Media catches up with Niece Motorsports newcomer, Ryan Truex. Truex recently joined the team for a full-season and will contend for the 2021 Truck Series championship.
Read more
Featured Stories

"It’s unbelievable," Rhodes said about winning twice in Daytona. "I don’t have words for it. I don’t even know what to say. This is so cool."
Read more