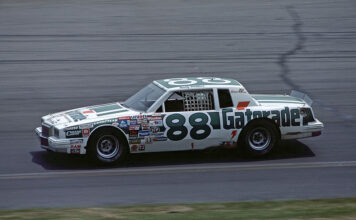 The number 88 has an impressive history in NASCAR and a who’s-who list of drivers and owners whose cars have been adorned with the number. [/media-credit]As was the case with no. 89, car no. 88 made its debut at Langhorne in 1949 with Pepper Cunningham of Trenton, New Jersey behind the wheel. Cunningham finished 33rd in his debut after wrecking his ’49 Lincoln. Cunningham would only compete in nine other races (he failed to start a 10th), and just one other using number 88. That start would result in his career best finish of sixth, coming at Langhorne.

The first win for car no. 88 came in 1954. Tim Flock would have had that honor, but his ’54 Oldsmobile was disqualified, handing the win to Lee Petty. Buck Baker would win later that season at Wilson Speedway in Wilson, North Carolina for the first of 66 wins for no. 88. Baker would win two other times using no. 88—later in 1954 at Morristown Speedway in New Jersey and five years later at Greenville-Pickens Speedway. Other notable drivers using the number include Neil “Soapy” Castles, Fireball Roberts (just two races), Tiny Lund, and Banjo Matthews.

In 1973, a little-known team called DiGard showed up at Dover with driver Donnie Allison. Comprised of Bill Gardner and Mike DiProspero, the team finished a disappointing 38th after the engine failed after just 18 laps. However, the stage was set for a run that spanned 14 years.

Allison ran the first two seasons for DiGard and 10 races in 1975. After the Pocono race, DiGard dropped Allison for a cocky young kid named Darrell Waltrip. Outside of five races for Bud Moore, Waltrip had driven his own equipment in every other start, winning once at the old Nashville Fairgrounds. Waltrip won once in 1975 for DiGard at Richmond; the first for no. 88 in 16 years.

Gatorade joined the team the following season for a five-year run with Waltrip in which he won 25 more races. It was during his time in car no. 88 that Waltrip earned his now-famous moniker of “Jaws”, a name given to him by rival driver Cale Yarborough.

Waltrip bought out his contract in 1980 to drive for Junior Johnson, a move that was unheard of at the time. DiGard would replace Waltrip with Ricky Rudd. Rudd didn’t win in his one season with DiGard and he left for Richard Childress Racing.

Bobby Allison replaced Rudd in 1982 and responded with eight wins, 20 top-ten finishes, and a runner-up finish in the points. Miller replaced Gatorade for ’83 and DiGard switched their number to 22. Gatorade and the number 88 moved to Cliff Stewart’s Pontiacs and driver Geoff Bodine. When Bodine left for Hendrick Motorsports the following season, Stewart signed Rusty Wallace, who won the ASA championship in 1983. Wallace won Rookie of the Year in 1984, besting a class including Phil Parsons, Greg Sacks, Doug Heveron, and Clark Dwyer.  In 1985, Gatorade left and was replaced by Alugard Antifreeze. [/media-credit]Buddy Baker took over car no. 88 in a car co-owned by himself and Danny Schiff. According to Sports Illustrated, Schiff was the CEO of Bull Frog Knits, a children’s apparel company. Baker had first used the number in 1959 in a race at the Southern States Fairgrounds; dad Buck used no. 87.  The partnership lasted four seasons, with Baker driving the majority. Morgan Shepherd filled in for Baker in 1988, along with Rick Mast, who made his Sprint Cup debut in the car.Greg Sacks started 1989 in Bakers’ Crisco-backed machine, but was replaced by Berwick, Pennsylvania’s Jimmy Spencer. Spencer earned three top-ten finishes in the ride. Following the 1989 season, the team closed its doors.

The number 88 saw sporadic use the next five seasons; Larry Pearson used the number in a one-off in 1990. Baker used the no. 88 twice more in 1991 and Jeff Fuller made his debut using the number in 1992.

Robert Yates, who had built engines for DiGard resurrected the number 88 in 1995 for Ernie Irvan’s triumphant return from a traumatic head injury—an injury Irvan had sustained the previous year at Michigan International Speedway. Given just a 10% chance to survive, Irvan overcame the odds and was back in a Sprint Cup car just 14 months later. Irvan finished sixth in his return, besting teammate Dale Jarrett by one position. The following season, Irvan returned to the 28 car and Jarrett was moved to the 88 with new sponsor Ford Quality Care.

In his first race, Jarrett won the 1996 Daytona 500, beginning an association with the number that spanned 11 years. In those 11 years, Jarrett won a total of 28 races and the 2000 championship. Jarrett’s final win came in car no. 88 at Talladega in 2005, beating Tony Stewart back to the flag. After Jarrett left for Michael Waltrip Racing, his vacancy filled with Ricky Rudd.