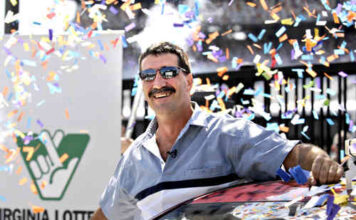 [/media-credit]But this year, Denette feels like he has hit the lottery all over again by securing veteran and championship Truck Series driver Ron Hornaday, as well as the shop formerly operated by the winners of the 2011 Owner’s Championship, Kevin and DeLana Harvick.

Denette said the deal with Hornaday came about over a simple dinner together.

“Hermie Sadler, my business manager in racing, came to me with a proposal because Hermie and Kevin (Harvick) are pretty good friends,” Denette said. “They started talking back and forth and he started talking to Ron.”

“We sat down for dinner one night and by the time we were done with dinner, we had a deal struck.”

While Denette knew of Hornaday’s championship resume, including 51 victories, 27 poles, and 146 top-five finishes, he was most impressed with the veteran driver’s heart and passion for the sport. He also was taken with his new driver’s desire to keep winning.

“His passion and his desire to keep winning impressed me most,” Denette said. “His goal is to win a fifth championship. When he left the table, he asked me what I expected from hi and I said just to give it your all and compete.”

“I told him, I want you to win your fifth championship with Joe Denette Motorsports.”

Hornaday, a 14-year veteran of the Truck Series, shared Denette’s excitement for his new ride, especially with the closure of his former team, KHI Motorsports.

“I’m very excited for the opportunity to work with JDM next season,” Hornaday said. “This is a young team and they have put a lot of the right people in place to win races and compete for a championship in 2012.”

“I’m honored to continue my relationship with Chevrolet and I’m looking forward to a successful 2012 season.”

Another important part of Hornaday’s team that will be come to Joe Denette Motorsports is crew chief Jeff Hensley. And, according to Denette, one of the best holdovers from the KHI days is that the team will actually be running out of the former race team’s shop.

“We hired Jeff a week or two before we hired Ron,” Denette said. “We’re actually going to be running out of Kevin’s old shop.”

“I feel like I’m taking over where Kevin left off.”

While Denette confirmed that he will definitely be running one truck full-time, as he did last season in his rookie year, he also revealed that he may be running a second truck, perhaps even on a full-time basis.

“Right now we are running the No. 9 truck with Ron driving and several races throughout the season, we planned on running a second truck,” Denette said. “But from what my understanding is Hermie (Sadler) is already striking some deals where I feel like we’re going to have two trucks on the track this whole season.”

“I’m not 100% sure but I know for a fact that Elliott Sadler will be driving a few races this year and I also believe that Kevin (Harvick) wants to run a few Truck races for me this year.”

“In essence, he’ll be driving his old stuff, so I figure it’s a win/win situation.”

As with many NASCAR teams currently, Denette continues to be in the hunt for sponsors at all levels for his race trucks.

“If someone wants to come up with some money and wants their company or logo on the side of my truck or on the hood of the truck, I’d gladly take it,” Denette continued. “I’ll put anybody on the truck that wants out there.”

In addition to sponsorship dollars, however, what Denette is dreaming about most is getting that first ever race win next year with his new team and driver.

“The first win, there will be nothing like it,” Denette said. “That’s what I came into the sport to do.”

This week, Denette is going to finish up the 2011 season by heading to Las Vegas for NASCAR Championship week, taking the opportunity to check out that NASCAR trophy that he is so hoping to win next year.

And, yes, Denette will not only be heading to the championship banquet but also hoping that he will get lucky at some of the black jack tables in the casinos as well.

“I actually purchased a table at the banquet and have a group of six people coming with me,” Denette said. “We will have Hermie Sadler and his wife and some people who won a contest through the Virginia Lottery.”

“It’s pretty cool. When you meet the drivers in person, it’s cool,” Denette continued. “You can sit down and talk to them. I played black jack last year with Kenny Wallace and Kurt Busch.”

“Just go to a Truck race,” Denette said. “It’s unreal. Any day, any time, anybody can be a winner there.”

“I’ve got a passion for trucks,” Denette continued. “To see them racing, it’s pretty cool.”

“The Truck Series is the grass roots of NASCAR,” Denette said. “It’s how the sport started.”

“And the best part is that anybody can come to the track and win.”