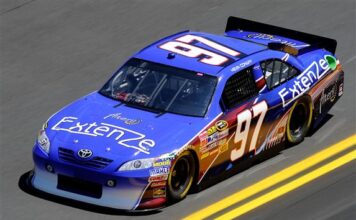 [/media-credit]As we continue the countdown to Daytona, we’ll look at the brief history of number 86, and then take a look at a second number—97—that didn’t get covered due to it being a higher number.

The number 86 has seen little use in comparison to some others—making just 320 appearances since 1949. The number 86 was first used in the 1949 race at Langhorne Speedway. Featuring 45 cars on a 1 mile dirt track, Harvey Hillgas, in his only Sprint Cup start raced his ’49 Ford to a 25th place finish.

As the theme has been the last few days, Buck Baker was the first to win (and only) driver to win using the number 86. That win came in 1961 at Hartsville Speedway, a .333 mile dirt track in Hartsville, South Carolina.

Other drivers using the number 86 included son Buddy, Neil “Soapy” Castles, Tiny Lund, John Sears, and road racer Elliott-Forbes Robinson. The last time the number 86 saw use was 1993 by West coast driver Rich Woodland Jr., who entered the 1993 Slick 50 500 at Phoenix. The number has sat dormant since then.  In total the number 86 has one win, 6 poles, 31 top-five and 78 top-ten finishes.

In comparison, the number 97 has had more than double the starts at 684. Drivers have sat on the pole eight times with this car number and accounted for 17 victories, 74 top-five finishes and 182 in the top ten.

The most successful driver of no. 97 is undoubtedly Kurt Busch. In the midst of a strong 2000 campaign in the Camping World Truck Series, Busch replaced a struggling Chad Little for the final seven races of the 2000 season in preparation for a run at Rookie of the Year honors in 2001. Busch would finish runner-up to Kevin Harvick in that category, in a somewhat disappointing season that resulted in just six top-ten finishes.

However, Busch returned with thunder in 2002, winning four races and placing third in the season-end tally; a 24 position improvement from the previous year. Busch won a total of 14 races and the 2004 championship for owner Jack Roush.

Bill Amick, a driver from Oregon was the first driver to win in car no. 97, beating 30 other drivers to win a 199-lap affair at Sacramento’s Capital Speedway in 1957. That win would be Amick’s only victory in NASCAR’s top series. Amick found his greatest success winning the 1965 championship in what was then the Pacific Coast Grand National Series; a series that evolved into the K&N Pro Series West division.

The only other driver to win in car no. 97 is a name many don’t immediately associate with NASCAR—Parnelli Jones. Jones won a total of four races in just 34 starts at NASCAR’s highest level, including two driving car 97. One of the victories was a brutal 500-lap (shortened to 487 due to rain) affair at the legendary Ascot Park in 1958; the other at the California State Fairgrounds a year prior. Jones would go on to win the 1963 Indianapolis 500 as a driver, as well as the 1970 and 1971 races with Al Unser as the driver. Amick and Jones were both initial inductees into the West Coast Stock Car Hall of Fame in 2002.

Bodine’s (and substitute driver Tommy Ellis) stint in number 97 came about when his Junior Johnson car was found to have an oversized engine in the 1991 All-Star race. NASCAR slapped the team with a four-race suspension, including crew chief Tim Brewer. To keep his drivers eligible, Johnson changed the car number to 97 and listed his wife Flossie as the car owner.

The most recent driver is Kevin Conway, who made three starts (and four laps) for owner Joe Nemechek at the plate tracks this season.