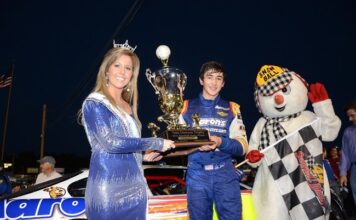 As Chase Elliott blew out the candles on his birthday cake during his surprise party for his 16th birthday, he had just one wish in mind. He wished he could win the 44th running of the prestigious Snowball Derby. [/media-credit]“I know you’re not supposed to tell anybody what you wished for but that’s what was my wish, to win the Snowball Derby,” Elliott said. “It was an amazing birthday week to go down to Pensacola and have an unbelievable weekend.”

“To have two top fives this weekend was unreal,” Elliott continued. “And winning the Snowball Derby, that’s a heck of a birthday present. It was an unbelievable week and all of our team enjoyed it.”

Elliott made his birthday wish at a special surprise party that his family had organized prior to the race weekend event.

“It was a pretty big deal,” Elliott said. “We got back from the Georgia game on Saturday night and there everybody was. I had no idea. It was pretty cool.”

Elliott’s win, however, was not as easy as blowing out the candles on his birthday cake. He and his No. 9 Aaron’s Dream Machine had to overcome adversity in the preliminary race, the Snowflake 100, as well as during the Snowball Derby itself.

On Saturday, Elliott started 27th in the Snowflake and had worked his way through the field to 16th before being collected in a crash, where his team had to replace a radiator. In spite of that challenge, the young driver was able to rally back and score a top-five finish.

In the Snowball Derby on Sunday, Elliott again faced adversity, when on Lap 141, the leaders of the race started spinning and another driver Augie Grill, hit Elliott from behind, again damaging the car. Elliott’s team rallied once more, repairing the damage and sending him back out on track.

“It broke the back bumper brace bar and we had to bear bond it back together because there was no time to weld it,” Ricky Turner, Elliott’s crew chief, said. “We came back into the pits three times during the caution to maintain our lead lap position.”

The young driver’s final brush with adversity came in the waning laps when a wreck brought out a red flag, leaving just five laps to go. When the green flag finally flew, Elliott raced door to door with D.J. VanderLey, pulling ahead on the last lap to win by just 0.229 seconds.

“You’re sitting there in that red flag and you’re thinking of the mistakes I’ve made this year,” Elliott continued. “I’ve lost races on restarts like that this year and I definitely didn’t want that to happen again.”

“You think about that stuff but at the same time you’re thinking this is your race and it’s time to move on and do things right,” Elliott continued. “You have to think about the positives and know that you’re the leader.”

“Everybody played a part in this weekend, both on Saturday night to have a problem with getting in a wreck, having to replace a radiator on pit road and not losing a lap and then to come back and finish fifth and then to do the same thing Sunday and win the race,” Elliott said. “It was unreal.”

“It’s the quality of guys that we have on our race team, in the shop, and also the guys that came in from Hendrick Motorsports to help us do our pit stops that led to this success.”

The young Elliott also credits one more significant person in his life for the race win, the person that goes by the moniker ‘Awesome Bill from Dawsonville.’ And although Chase’s dad has not won the Snowball Derby himself from behind the wheel, Chase credits his father just as much for being such an integral part of the race team.

“Our victory there was definitely a victory for me but it was also a victory for him,” Chase said of his father Bill. “He is as big a part of this race team as me or anybody that plays a part in our weekend.”

“It was a win for all of us and not just me,” Elliott continued. “There’s a lot of guys who don’t get to run and I’m just thankful to him and to Aaron’s to even be able to go down there and run.”

Chase Elliott also has been following in his father’s footsteps in another important way. Much like his dad, the young up and coming driver was just voted as the ‘Most Popular Driver’ in the K&N Pro Series East, in which he has been competing this year.

“It’s really cool,” Elliott said of the honor. “Honestly, I know that a lot of my dad’s fans helped out in the voting for sure and I really appreciate their support.”

“I really hope and my goal is to make my dad’s fans mine as well,” Elliott continued. “I want to earn that on my own. And I hope to earn a lot more in the future.”

As far as his future, Elliott is now taking a well-earned break having run and won his last race of the 2011 season.

“We are done for 2011,” Elliott said. “My next race is planned to be Speedfest at Lanier at the end of January.”

“I have about a month and a half off to get gathered up and go racing again,” Elliott continued. “I’m going to get through the next couple of weeks of school and then enjoy Christmas and New Year’s with my family and just have a good time.”

Yet the young driver cannot help but continue to marvel at his historic Snowball Derby win, especially as the youngest winner in the history of the event.

“It’s the Snowball Derby,” Elliott said. “It sounds so simple but it’s so true.”

“There’s so much history behind this race,” Elliott continued. “Any short track racer’s dream is to win the Snowball Derby, no matter who you are, where you come from or who you’re trying to be.”

“I wished to win the Snowball Derby,” Elliott said. “This is my wish come true.”