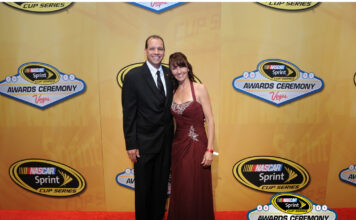 MAHLE Clevite Inc has named Santee-California’s Dave Arce as the winner of the prestigious MAHLE Clevite Champion Technician Contest. It was an announcement heralded by many who said this veteran engine builder and race driver truly deserves this special honor.

Arce, the proprietor of the El Cajon-California based Arce Engines as well as a competitor in the Lucas Oil Modified Racing Series, presented by Rockstar Energy Drink, also won a special VIP trip to the 2011 NASCAR Sprint Cup Series Champion’s Week in Las Vegas.

The concept of the MAHLE Clevite Inc Champion Technician Contest was announced in early October by Ted Hughes, the company’s Marketing Manager, who at the time said: “we wanted to salute the hard work of the thousands of engine technicians around the country. The Champion Technician Contest is just one of the many ways we want to roll out the red carpet for those who support us day in and day out.”

One of the requirements for entering this contest involved the submission of a 250 word essay about an engine technician or specialist who demonstrates passion, talent and a forward thinking mindset that exemplifies a champion in every aspect.

The essay nominating Dave Arce for this award was written by one of his biggest fans: his daughter, Hollee Arce. Her dad’s experience and accomplishments were well known. But it was Hollee Arce’s vivid description of dad’s passion for building the best engine possible that turned out to be a major selling point for the contest judges.

In his announcement, MAHLE Clevite’s Ted Hughes said “from rebuilding engines in his spare time to building several winning race engines and fulfilling his dreaming of owning his own business, Dave Arce’s accomplishments show that he is truly a champion in every aspect. We are pleased to present Dave with this award and wish him continued success in his career.”

Arce’s career as an engine builder first presented itself at age 16. Typical of high school students, Arce wanted something to drive and he set his sights on a beat up 1963 Chevy Truck parked at his family home. The task of rebuilding the truck’s engine turned out to be challenging and Arce soon realized he needed a better source of tools and equipment. That’s when he pulled the cylinder heads out of the truck and took them to school where he performed a valve job utilizing the school’s auto shop class facility. The result was his first ever successful engine rebuild. However there was a rather interesting wrinkle to this story: it seems that Dave actually wasn’t enrolled in the school’s auto shop class and was, in fact, an electronics major. The engine rebuild turned out to be an early example of his ability to think and work outside of the box.

By the way, his interest in electronics paid off well for Arce and led to a lengthy and successful career in the aerospace industry. At this point in life, his love for building engines was primarily a hobby.

However the love of all things automotive was very much on Dave Arce’s mind. In 1990 he established Arce Engines headquartered in El Cajon-California. His vision and hard work quickly paid off and, in virtually no time at all, Arce Engines grew into a complete machine shop and engine remanufacturing business. Recognizing that diversity was a key element to any growing business, the shop soon expanded its operation to include automotive maintenance and repair and now provides its customers with a full service line up that ranges from simple oil changes to engine rebuilds and installations. Also at this time Arce became a Master Machinist certified by Automotive Service Excellence, ASE. Arce Engines was also awarded the honor of being named the top engine builder in San Diego during the year 2000.

While the shop continued to flourish, there was just one more item on Dave Arce’s automotive checklist: racing. For someone who was so passionate about building engines, it was only natural that it would eventually lead Arce to a race track. He began his racing career in 1996 at the former Cajon Speedway. He used the speedway’s street stock program as a racing learning curve and then quickly graduated to the more powerful and faster late model stocks.

It turned out that Dave Arce was also very good at race car fabrication as well. The pristine appearance of his car’s paint jobs alone proved that point. It also wasn’t very long before those cars began winning races. When the Cajon Speedway closed its gates in 2003, due to alleged progress, Arce began towing his race cars to the Orange Show Speedway in San Bernardino where he became a formidable, race winning, competitor during the 2004 to 2007 racing season as well as the 2009 late model season.

At the beginning of the 2007 season Arce decided to take his racing act on the road and joined the then newly formed Lucas Oil Modified Racing Series, presented by Rockstar Energy Drink. It’s a racing format he really enjoys and still continues to race in the series. “The Lucas Oil Modified Series has been an absolute success since its inception in 2007 by series promoter Greg Scheidecker,” Arce noted adding “the series is extremely challenging and competitive. You have some 25 to 30 race teams together in a special ten race points series that runs on five different tracks in three different states. The series is extremely driver, and team owner, friendly as well as being a huge hit with the fans.”

Racing a Lucas Oil Modified also turned out to be a big customer boon for Arce Engines as well. This was especially true prior to the start of the 2010 racing season. That’s when Arce was contacted by Jim Mardis, one of the premiere drivers in the series, who challenged him to build him a power plant that had the maximum power for the money he had to spend yet remain legal per the series’ rule book.

The Lucas Oil Modified Series 2010 season began in March of that year at the Lucas Oil I 10 Speedway in Blythe-California. Mardis and his new Arce built engine won the season opener that night. In September Mardis was the series points leader and won his second race of the season at the Orange Show Speedway in San Bernardino. At the onset of the post race winner’s interview, Mardis screamed “Dave Arce you are the man !” It was during that same interview that Mardis introduced a new term that is still being used today in the Lucas Oil Modified Series: “the Arce Bullet.” That’s what he called the power plant Arce built for him. Also that year Mardis won the series championship and, with the “Arce Bullet” and repeated the feat in 2011 making him the only driver to win back to back championships in the series. That’s also when Arce Engines earned the title of championship engine builder. Needless to say a lot of race teams, from all genres of the sport, have become interested in the “Arce Bullet.”

Dave Arce is understandably elated over winning the MAHLE Clevite Technician Contest. It is especially meaningful to him because it was his daughter, Hollee, who personally wrote what turned out to be the winning essay. The fact that the essay was judged by personnel from NASCAR, the NHRA and MAHLE Clevite also meant a lot to him. “As far as Arce Engines goes, I can only hope that this national exposure signifies the effort that we put into our products along with our business and ethics as well towards the services that we provide our customers,” he said.

As the MAHLE Clevite Technician winner, Arce received a VIP trip to the NASCAR Sprint Cup Champion’s week in Las Vegas held November 30th through December 3d. The prize package included coach airfare for two, a three night hotel stay as well as special meet and greets with NASCAR personalities. The award also included a special dinner with MAHLE Clevite Engine Builder Of The Year Doug Yates, the mastermind of Roush Yates Racing Engines. There were also VIP tickets to the NASCAR Victory Lap and NASCAR After The Lap fan festivals as well as two tickets to attend the official NASCAR Sprint Cup Awards Ceremony. The value of this special package was estimated to be worth well over $3,700.

Arce really enjoyed dinner with MAHLE Clevite’s Ted Hughes and Doug Yates. It was a professional networking experience that was very valuable to him. He called it “a meaningful exchange on subjects that included building race engines, engine products, new innovations such as fuel injection coming to NASCAR and even operating a business during these troublesome economic times. Let me conclude by saying that Ted Hughes and Doug Yates are two fantastic people who have worked very hard in their businesses. They are very family orientated, they go to work each day just like I do and have schedules and work loads just like most of us. They are truly genuine people.” [/media-credit]However, the Las Vegas trip was not just about business. Dave Arce, and his lovely wife Sandy, thoroughly enjoyed what they termed “a trip of a lifetime.” There were many highlights during their Las Vegas stay with one of them certainly being receiving a beautiful plaque for winning the MAHLE Clevite Technician Award.

The Arces described having dinner with 1,600 NASCAR luminaries as being amazing. Recalling a funny moment, Arce said “we were walking into the Wynn Hotel and were surprised to discover a hallway filled with NASCAR fans who were trying to figure out who we were as we made our way down the red carpet to the banquet room. Then I received a text message from a friend who said he saw Sandy and I on national television while walking down the red carpet. I just can’t thank MAHLE Clevite enough for this amazing trip.”

Since his return from Las Vegas, Arce has been receiving accolades from friends and his fellow racing competitors regarding his award. It’s only right. Dave Arce is the personification of how you can achieve your great American dream if you’re willing to combine the elements of vision, determination, hard work and good personal ethics.

Ask any customer at Arce Engines or any colleague from the Lucas Oil Modified Racing Series and they will tell you the same thing: Dave Arce truly deserves this award and it couldn’t happen to a nicer guy.