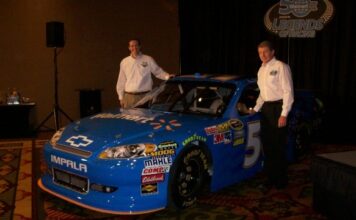 Photo Credit: Greg Engle, NASCAR Examiner[/media-credit]At this stage in his career, Bill Elliott could definitely sit back, rest on his laurels, and enjoy watching his young son Chase progress in his racing career. Yet for the veteran driver known as ‘Awesome Bill from Dawsonville,’ the upcoming racing season promises to live up to his moniker.

This past week, Elliott made an historic announcement, partnering with Walmart for the July Daytona race, the Coke Zero 400, in celebration of the superstore’s 50th anniversary. The joint venture, “Legends in Racing” is the first time ever that Walmart as sponsored a Cup car.

“It came about real quick,” Elliott said of his historic deal with the superstore giant. “I don’t really understand the total dynamics but it came about super-fast.”

“I’m very excited about it,” Elliott continued. “There’s a lot of opportunities there for the race fans, Walmart and NASCAR all together.”

“The opportunity for me at this stage of my career, having something like this come along, is very gratifying to me.”

Elliott, the 1988 Cup Champion who competed last year in five Cup races, will be piloting the Walmart No. 50 Car. And according to a Walmart spokesperson, the superstore could not be more pleased with their choice as well.

“The No. 50 car is a big deal for us,” Rand Waddoups, Senior Director Entertainment Marketing for Walmart, said. “It’s one of the major things we’re excited about as we turn 50 and we couldn’t have picked a better driver to represent us.”

In addition to being the primary sponsor on Elliott’s car, Walmart also is sponsoring a special ticket package for the fans. This package will be available at 17 races throughout the NASCAR Cup season.

“They have a great program for the fans,” Elliott said. “Last year they started working with NASCAR and this will just expand what they are doing in the future.”

“They have a ticket package where you can get four tickets, four hot dogs and four drinks for $99 at various different tracks,” Elliott continued. “It’s a huge deal.”

“It’s as big as when NASCAR went to Indy and expanded,” Elliott said. “It’s big for everybody involved.”

Although he has been out of the seat of a race car for a bit of time, Elliott does not see that as a disadvantage going to Daytona over the summer.

“I’ve run well at Daytona and that’s a race track where you can be out of the seat of a race car and still perform,” Elliott said. “With Turner Motorsports and Hendrick engines, I’m very confident from the competition side that everything will be there.”

“Their key point for Walmart and for me is doing all we can promotion-wise, not necessarily worrying about the race but building up to it instead.”

While other drivers may feel some pressure carrying the Walmart banner for their first official ‘on-the-car’ sponsorship, Elliott is not nervous about it at all, instead feeling tremendously honored and excited.

“It’s a big step for Walmart because they’ve never been a primary on a Cup car before,” Elliott said. “It’s very important to me to make it work.”

“It’s a great opportunity and I’m so pleased that I’m able to do this kind of deal.”

“I feel like I can offer more from the standpoint of the promotional side than a driver that drives full-time,” Elliott continued. “I’ve been around the sport a long time so we’ll work with Walmart the best we can to achieve their goal and trying to put race fans in the stands at those key markets.”

“I’ll do the best job that I can for them so it will work out for their marketing strategy.”

While the Walmart deal was uppermost in ‘Awesome’ Bill’s mind due to the announcement this week, the veteran driver has other plans for the upcoming race season.  First and foremost, 2012 includes his continued mentoring of drivers hoping to develop and hone their NASCAR talents.

“Right now, I’m trying to put a couple more late-model programs together for some different people,” Elliott said. “As soon as I get that signed, sealed and delivered, then I can expand on that.”

“I’m trying to expand my short-track program to help a few guys along,” Elliott continued. “We’re doing a little deal with a kid named T.J. Reaid this weekend at Cordele and we’ll continue to work with another couple guys.”

“I’m also trying to work out a program with Dan Kennedy to help him do some late model stuff this year,” Elliott said. “So, I’ve got a lot of things going this year.”

Finally, of course, Elliott plans to be the proud and watchful papa, overseeing his sixteen year old son Chase’s progression in the sport. Chase Elliott will not only be racing this weekend at Cordele in the 2012 SpeedFest but will also continue his driver development program with Hendrick Motorsports in the K&N East Series.

“My other goal is to stay close to Chase and where he is on the K&N and ARCA side as the season continues,” Elliott said. “Other than that, I would like to run a few more Cup races, but if it don’t happen, so be it.”

“My key goal is being available to Walmart this year to do what they need me to do,” Elliott continued. “I can’t say enough about how honored I am to do their program.”

“It’s a great opportunity and the fans can really benefit,” Elliott said. “Hopefully, we’ll make it a win-win situation.”