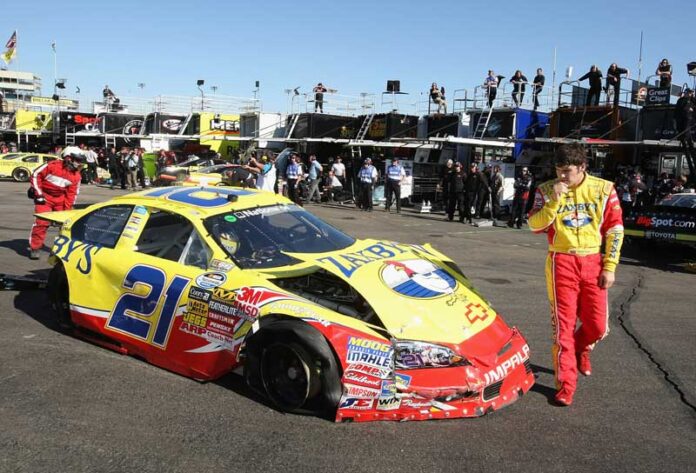 [/media-credit]Early Friday morning 22 year old John Wes Townley was arrested for DUI for the second time in his career. Townley, who just inked a deal to drive in the Camping World Truck Series with RAB Racing, crashed his car into a telephone pole while apparently being under the influence of alcohol. RAB Racing, Townley’s new Camping World Truck Series team, suspended the driver until they feel he can return.
Don’t misunderstand me. RAB Racing and team owner Robby Benton should be commended for their actions after the incident with Townley. They made the proper decision in this deal, especially since Zaxby’s, Townley’s sponsor, is owned by John Wes Townley’s father. It was a risky move by RAB Racing.
While RAB Racing was suspending Townley and the NASCAR world was learning about the horrible incident with the 22 year old, NASCAR themselves were……well. Nobody really knows.
If you went on NASCAR’s website, you could read an article about Juan Pablo Montoya’s new crew chief, Chris Heroy or you could read about Jeff Gordon being “Fired up.” And the article about John Wes Townley? There isn’t any.
It’s absolutely obscured that NASCAR, a sport which has a no tolerance with drugs, doesn’t even make a comment, or put an article on their website or make a comment saying they were disappointed in the situation or anything.
NASCAR does nothing.
It reminds me of a situation in the early 1990’s when another young racecar driver got in trouble with the law several times and had several DUI’s including incidents that NASCAR did nothing about.
That driver, whose name is I shall not say, had another accident one night where he lost his life after a race at Rockingham in 1990.
Do the right thing for John Wes Townley NASCAR! Do the right thing! God forbid we have another incident like we did in 1990. Nobody ever wants to see that again.
Quit pretending like this stuff is not happening and put your foot down.
Brian France, Mike Helton and everyone involved, you should be ashamed!