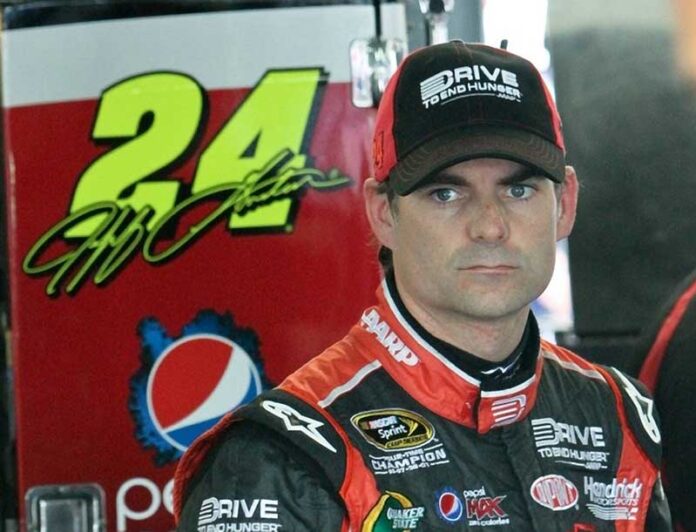 [/media-credit]With the partnership between Hendrick Motorsports driver Jeff Gordon and the AARP Foundation’s Drive to End Hunger initiative heading into its second year on the track, this special promotion has taken some new twists and turns off the track as the driver of the No. 24 Chevrolet readies for the 2012 season.

The first twist on one of the most successful cause-related marketing campaigns in the sport is a new partnership with Quaker State, who has joined the Drive to End Hunger effort by pledging portions of its product sales at Walmart. This new fundraising effort will take place from February 1st to March 31st.

“We are proud to initiate this cause-related effort to support the AARP Foundation in its quest to help those in need through Jeff Gordon and the Drive to End Hunger,” Chris Hayek, Quaker State Global Brand Manager, said. “By partnering with Walmart, the promotion is elevated onto the national stage.”

“We’re really thrilled that Quaker State engaged with us,” Jim Nedohon, Interim Vice President for AARP Foundation’s Hunger Initiatives, said. “By allowing us into Walmart, this ensures that we can attract national attention to the need to alleviate hunger for seniors.”

“We were at the track talking,” Nedohon said. “My background is in cause-related marketing and we were brainstorming about how to activate our sponsorship of Jeff Gordon in a brick and mortar store.”

“This is a new opportunity for Quaker State to have a cause related marketing campaign on one of their products,” Nedohon continued. “It developed over a couple of months.”

“We worked through all the details, such as having a bottle flag with Jeff Gordon and the No. 24 Drive to End Hunger car,” Nedohon said. “Jeff is on the bottle and has a relationship with Quaker State as an associate sponsor.”

“So, Jeff was thrilled to be able to extend his brand to support our cause.”

The best part of the new twist in the Drive to End Hunger sponsorship is that it furthers the mission of the AARP Foundation, which is to raise awareness about the issue of older Americans who are facing hunger, as well as fulfilling Quaker State’s social mission.

“Quaker State is very socially oriented and they were totally onboard with helping us execute our mission,” Nedohon said. “It’s one more corporation that embraces the mission that we have to end hunger.”

“Quaker State could have easily written a check for $50,000 but we are focused together on efforts that have long-term, sustainable impact,” Nedohon continued. “This Quaker State promotion is taking us off the track and into Walmart stores.”

“This allows people to really take the time to read the materials and it will mean even more to our work at the Foundation.”

The new sponsorship twist off the track has also permitted the AARP Foundation to make grants to other nonprofit organizations focused on sustainable solutions for ending senior hunger.

“We sent out an RFP to identify organizations that are trying to address stable solutions to hunger,” Nedohon said. “We had over 750 letters of inquiry and 150 completed applications and awarded ten grants throughout the United States for $1.9 million for sustainable solutions to ending hunger.”

“Every time we put this effort in a new place, it reminds people about the hunger issue,” Nedohon continued. “And it may even be occurring for someone they know.”

The second twist on the Drive to End Hunger took place at the recent Barrett-Jackson Auto Auction, where a Corvette donated by team owner Rick Hendrick was auctioned off for $700,000.

“I got to go out with Mr. Hendrick to Phoenix to the Barrett-Jackson auction,” Nedohon said. “It’s incredible because this again is reaching another level of enthusiasts around the automobile industry.”

“This was a special limited edition Corvette and only 60 will be made,” Nedohon continued. “This was the first one to be auctioned to benefit Drive to End Hunger.”

“When the bidding started and Mr. Hendrick sweetened the deal by inviting the new owner to Daytona, it just erupted,’ Nedohon continued. “ It went to $300,000 and kept going.”

“It was just phenomenal,” Nedohon said. “After the auction was finished, another bidder donated an extra $100,000 to the Drive to End Hunger effort.”

“I can’t tell you how amazing it was to see how the cause resonated with thousands of people watching.”

While the AARP Foundation is ecstatic about these twists and turns, as well as their partnership with Jeff Gordon and Rick Hendrick, they have not been completely surprised about the success of their sponsorship.

“It’s not completely surprising,” Nedohon said of the sponsorship. “It’s amazing to see how many NASCAR fans care.”

“We’ve found that the NASCAR fans want to know how they can help,” Nedohon continued. “That’s why we’ve been so pleased to support our local food banks at track and now with this new initiative off-track.”

“It helps when you have partners like Jeff Gordon and Rick Hendrick,” Nedohon said. “We couldn’t really think of any better partners to help fight this good fight.”

And for his part, the Drive to End Hunger driver could not agree more.

“Honestly, I don’t know if 10 years ago I would have gotten behind something like this but with just the experience of life and the things that become more important to you, I’ve gotten into it,” Jeff Gordon, driver of the No. 24 Drive to End Hunger, said. “I feel like it did come at the right time in my career.”

“We’ve sort of set a trend in NASCAR that will be catching on.”