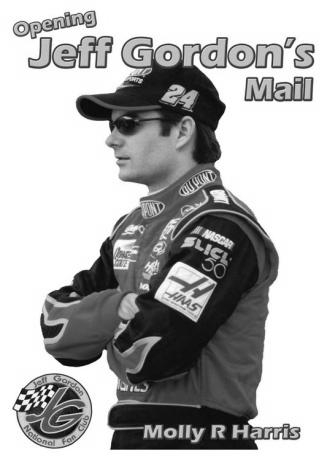 [/media-credit]Williams, AZ ~ Do you ever wonder where all of those celebrity letters wind up? If you sent a letter to Jeff Gordon in the 1990’s, chances are that it was opened by Molly and Russ Harris, the founders of the Jeff Gordon National Fan Club – the largest personal touch fan club in racing.

For more than a decade, they opened Jeff Gordon’s mail! Molly’s new book “Opening Jeff Gordon’s Mail” takes readers on a behind-the-scenes tour of the Jeff Gordon National Fan Club. From their first meeting with the sprint car standout to his early years in NASCAR to his championship seasons, the book takes racing fans to places they only dreamed of.

Molly and her husband founded the Jeff Gordon National Fan Club in 1992. From the outset, they catered not just to the fans of Jeff Gordon, but all race fans. By doing so, they created the most popular fan based club in all of racing in the 1990’s. In today’s world of here today, gone tomorrow online marketing and product placement campaigns, “Opening Jeff Gordon’s Mail” takes readers to a time when customer service and fan appreciation was the gold standard.

“Opening Jeff Gordon’s Mail is truly an amazing journey through Jeff Gordon’s entry and championship years in NASCAR. The book goes beyond JG’s on-track success and takes fans “behind the scenes” of the Jeff Gordon National Fan Club. The book provides a mirror on Gordon’s success, but it also shines an incredible spotlight on YOU — the die-hard Jeff Gordon fan!”