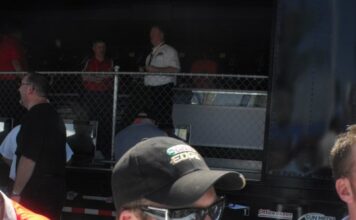 [/media-credit]Early last week, DJ Kennington and Castrol Edge announced that once again they’d be partnering up to compete for the 2012 NASCAR Canadian Tire Series Championship. The St. Thomas, Ontario racer will pilot the No. 17 Castro Edge Dodge to continue one of the longest partnerships in the series as it approaches two decades.

“I’ve said this for many years, I simply wouldn’t be where I am and would not have been able to win races and a championship without the backing from Castrol,” the 2010 series champion says.  “They have welcomed me into their family from the beginning and our relationship continues to grow, nobody’s had better support than me.”

The company is excited about the continued partnership as Marketing Communications Manager for Wakefield Canada, which distributes Castrol Edge, Marsha McLaughlin says, “partnering with DJ Kennington has been an important part of our marketing program with Castrol for nearly two decades.  We’re proud of all that DJ has accomplished in racing and look forward to another exciting season together helping him edge his way to another championship.”

“We gave it a good run last year but came up just a little short repeating,” Kennington says.  “Our guys are all anxious to get back and get back on top because we like finishing first better.”

The 2012 season opens up on Sunday May 20th at Canadian Tire Motorsport Park, formerly known as Mosport International Raceway. All the races during the 2012 season will be televised on TSN.