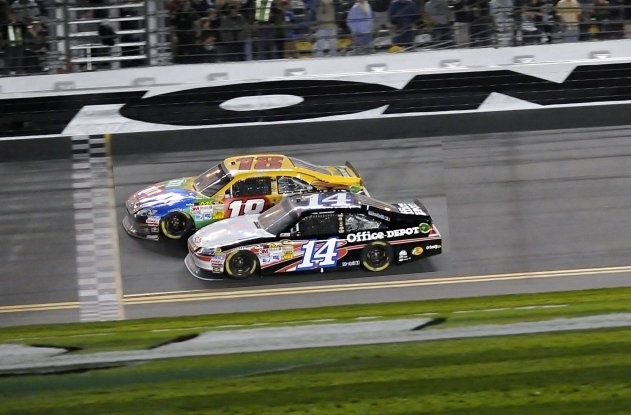 [/media-credit]Last nights Budweiser Shootout was an incredible display of talent and mayhem with the return to pack racing. We all learned something. We learned that packs breed multi-car wrecks. But wait we learned that tandems cause wrecks too. So when we look at it what we really learned is that speed causes wrecks. However, I can’t think of a single fan that I have talked to that would want to see them go to racing 4 cylinders. Not that that would matter they would find a way to make them lightening fast anyways.

The Shootout was marred by 5 caution flags for a total of 22 laps including one red flag situation for Jeff Gordon’s roll over, 25 cars started the race, 13 cars finished the race, 10 on the lead lap at the end and approximately 6 of those were undamaged.

Even with those stats in hand, the drivers were happy with the return to pack racing. “I actually had fun racing at Daytona again which I haven’t had for a while, so I’m really, really appreciative to the work that NASCAR has done in the off-season and the test session and even after the test of the changes that they made to try to make it better for us out there,” Tony Stewart said. “I had more fun as a driver tonight than what we’ve had in the past.”

Dale Earnhardt Jr, whose night ended early when Joey Logano and Marcos Ambrose got together taking out 6 of the top 10, had been a very vocal detractor of the tandem racing echoed Stewart’s sentiments, “I liked (this package) better. At least I know what to expect. I feel like I have a better chance with this style than what I had last year. These cars have massive closing rate. When you get out front your car just bogs down, and they come flying by you. You just really have to be on your toes, because they get to you really quick. There’s really no place to block. When guys would catch up with me, I wouldn’t try to block… we just raced it out. But I feel really happy with all the work NASCAR has done in the off-season. It can get better, and I hope they strive to improve. But they should be excited about what they saw tonight.”

But perhaps the most tremendous part of the show was the display of talent put on by Kyle Busch and Tony Stewart. Busch made three miraculous saves in the course of the event. Saving cars that most competitors would have lost. “There are a lot of guys that wouldn’t have caught that. He did a fantastic job with that save,” Stewart said of Busch. “I’m sitting there and the green is still out. I’m like, ‘Man, that’s the coolest save I’ve seen in a long time.’ ” “I don’t know how many times I spun out but didn’t spin out,” Busch exclaimed. “Amazing race. I’m glad to be standing in victory lane – starting off the year right, hopefully.”

Stewart who lead for 7 laps at the end of the race lost the race late off of turn-4 when Busch set up and perfectly executed the old school sling shot move into the tri-oval. Pulling even with Stewart the drag race was on. At the line it would be Kyle Busch by the closest margin in Bud Shootout history .013 seconds.

When asked what position he would have rather been in Stewart responded, “First, I was just happy that I was in the pairing at the end, to be up there. But I think history shows that you want to be that second guy I think in all reality. Especially here, it just seems like for some reason you can make that move here. Talladega for some reason, it seems like you make the move, the start/finish line being further around the tri-oval, almost seems like it’s too early when you make it. It just seems like that second spot is kind of the one you want to be in.”

Busch stated he was not concerned with the move out of four, “He knew he was a sitting duck as soon as we got clear of everybody. It was over. He knew who the winner was. I’m trying to think of a better way to explain it. That’s what it was. If I would have been in his spot, I would have known, too. The car behind has the momentum because you’re pushing the car in front. You can use the side draft and get by him. The only thing I could have screwed up on is if I would have gone low, and Stewart forced me below the yellow line, I could have gotten posted for that, so it’s a good thing I went high.”

But Stewart was not without his show of skill as well. Running back in the pack when the first caution flew, Stewart sliced and diced his way thru the carnage like a skilled surgeon removing a growth from a bundle of nerves. Though he picked up debris and felt that he had tire going down, Stewart’s race car was intact. With the break coming up the minor adjustment needed to improve it to race contender was merely a matter of patiently waiting for that yellow flag to fly.

The Shootout has always been an exciting test session. It has always been full of wrecks and blown up cars. But the last couple of years it had become dreary and weary. The work that NASCAR has done in the off season restored it’s excitement. No I still don’t like wrecks. But what I did like was the fact that a 4-time champion ended up on his roof and crawled out with a scratched finger. Scratched not cut. What I did like was that Kevin Harvick was able to drive to his garage with out injury even though the Budweiser Chevy was badly damaged and on fire all around him. He was unhurt and climbed from the car amidst a cloud of extinguisher fluid. What I did like was that a tandem of cars pulled away at the end but this time it was to race for the prize not to share it.

Is the package perfect? No. But NASCAR didn’t say it was. Are there issues with cooling systems and spoilers and bumpers and lots of other factors? Sure there are. But lets be honest here folks there always has been. Too fast they fly. Too slow they can’t get away. Too hot they blow up. Too cool they are too fast. It’s a vicious puzzle of check and balance and sacrificing one thing to ensure another. Frankly, Kudos to John Darby and Robin Pemberton and all the NASCAR engineers that worked their butts off to give the fans and the drivers what they wanted and what they asked for.

Congratulations and thanks to Kyle Busch on his victory in the Bud Shootout. Incredible display of an incredible amount of talent. Kudos to Tony Stewart on starting his championship reign with honesty and class. Also a big shout out to HMS chassis department and safety engineers absolutely awesome job folks! There was a time when God forbid the 24’s wreck would have had tragic results. Finally, allow me to say it was awesome to see Dale Earnhardt Jr., Steve Letarte and the 88 National Guard/Diet Mtn Dew team lead the race and being a strong contender!

That said, to all the competitors in the series thanks for giving us everything you have to give, you are our heroes. Most importantly, thanks to all the families who shared their loved ones with us so we could cheer our favorite driver and favorite teams. You are the true heroes of the sport and we are forever in your debt.