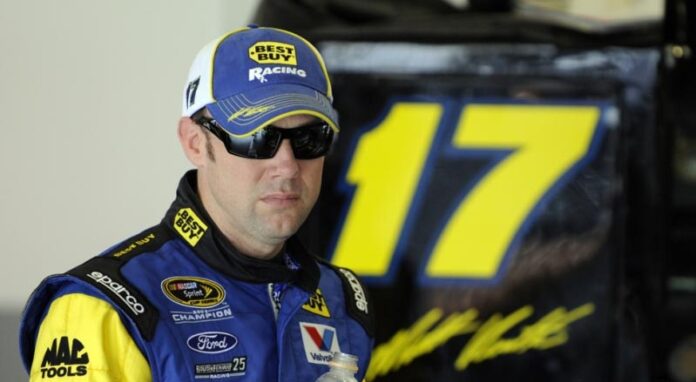 “Brad Keselowski may have 200,000 followers,” Kenseth said, “but I’m happy with just 42. And speaking of ’42,’ the race took a turn for the worse when Juan Montoya crashed into a jet-fueled track dryer. It was almost ‘Juan and done.’ That’s what’s called a ‘Colombian-fuego.”

“How is a jet dryer like a Junior fan in the infield?” Earnhardt said. “They both got ‘lit’ at Daytona.

“Although I didn’t win, I saved racing from a Kenseth-Biffle 1-2 finish, which, if it were a Farrely brothers movie, would be called Humdrum And Humdrummer. That’s victory in itself. At this point, I’ll take any I can get.”

3. Denny Hamlin: Hamlin’s No. 11 FedEx Toyota led a race-high 57 laps and was a factor for the duration of the Daytona 500. But in the end, his charge to the front fell short and he finished fourth.

“My car was fast,” Hamlin said, “but not as fast as the fastest car on the track. That would be Danica Patrick’s No. 10 GoDaddy.com machine, which was moving at hyper speed. Just to clarify, that’s the speed of hype.”

4. Greg Biffle: Biffle led 44 laps at Daytona and finished third behind Matt Kenseth and Dale Earnhardt. Biffle was running second into the final corner, but never found the momentum to get past Kenseth.

“Even with Earnhardt pushing me,” Biffle said, “I still couldn’t get past Kenseth. I couldn’t get by the car labeled Best Buy, which eventually said good bye. I guess I didn’t bide my time correctly.”

5. Jeff Burton:Burtonled 24 laps at Daytona and finished fifth as the Richard Childress trio ofBurton, Paul Menard, and Kevin Harvick finished 5-6-7 in the 500.

“This RCR team was impressive at Daytona,”Burtonsaid. “As opposed to ‘burning with jet fuel,’ we were ‘cooking with gas.’ We’ve all heard of ‘gas and go.’ Juan Montoya’s crash has coined a new term: ‘go and gas.’”

6. Paul Menard: Menard was fast in the Daytona 500, scoring a sixth in an eventful race marked by rain delays and Juan Montoya’s fiery crash with a jet dryer during a lap 159 caution.

“It started at 7:00 P.M. and lasted until the next morning,” Menard said. “No, I’m not talking about a Jeremy Mayfield bender; I’m talking about the Daytona 500. Or should I say the ‘Daytona 500 Degrees?’”

7. Kevin Harvick: Harvick, one of the early favorites to win the 2012 Sprint Cup championship, posted a solid start to the season with a seventh in the Daytona 500.

“We’re confident we can win it all this year,” Harvick said. “In other words, we’re ‘expecting.’ I urged everyone on this team to visualize a Cup title. So, the seed has been planted. And by golly, there will be a berth later this year.”

8. Carl Edwards: Edwards started on the pole at Daytona and finished eighth, successfully overcoming a late penalty and damage incurred in a lap 187 wreck.

9. Tony Stewart: Stewart’s No. 14 Office Depot Chevrolet was fast at Daytona, as the defending Sprint Cup champion won his Gatorade Duel and was up front for much of Monday’s 500.

“Michael Waltrip is happy,” Truex said. “Happy with my finish, and happy that Juan Montoya has displaced him as the driver most negatively associated with jet fuel.”