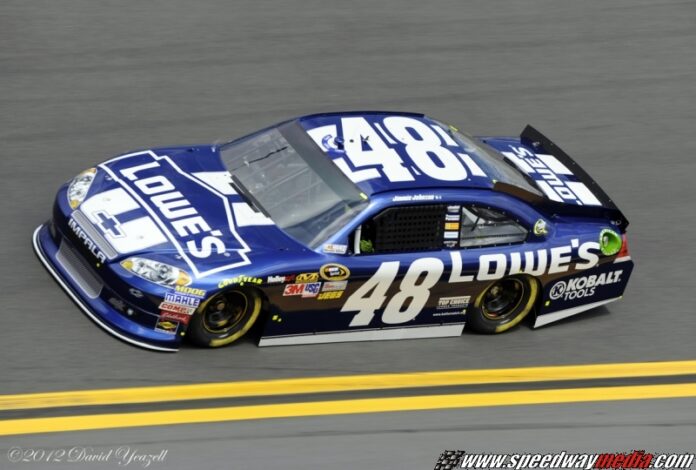 [/media-credit]On Wednesday, NASCAR issued a list of steep penalties to Jimmie Johnson and team No. 48 as a result of rule infractions found on Febraury 17th during opening day of inspection for the Daytona 500. The penalties include a six week suspension for both crew chief Chad Knaus and car chief Ron Malec from the next six NASCAR Sprint Cup Series events, plus probation till May 9th. They also fined Knaus $100,000 while taking away 25 driver points from Johnson and 25 owner points from his owner, Jeff Gordon.

According to NASCAR, they did not agree with the shape of the c-posts and requested that they be changed. The C-post is a piece of paneling towards the back of the car that connects the roof to the rear quarterpanel. The team modified the piece to gain an aerodynamic advantage.

As per their press release, the posts were “in violation of Sections 12-1 (actions detrimental to stock car racing); 12-4J (any determination by NASCAR officials that race equipment used in the event does not conform to NASCAR rules detailed in Section 20 of the rule book or has not been approved by NASCAR prior to the event); and 20-2.1E (if in the judgment of NASCAR officials, any part or component of the car not previously approved by NASCAR that has been installed or modified to enhance aerodynamic performance will not be permitted – unapproved car body modifications).”

Hendrick Motorsports has already announced that they will be appealing the penalties, which will see Knaus and Malec remain at the track during the process.

“Our organization respects NASCAR and the way the sanctioning body governs our sport,” Rick Hendrick, owner of Hendrick Motorsports, said. “In this case, though, the system broke down, and we will voice our concerns through the appeal process.”

After NASCAR made the call during Speedweeks to have the 48 team remove the parts, there was a lot of discussion from those involved about exactly what was going on. According to Ken Howes, Hendrick’s Vice President of Competition, he told SBNation.com that crew chiefs are always working around the templates to try and gain an advantage.

However, NASCAR has made it clear to teams that they do not like them modifying parts “between the templates” and have told Knaus that before, suspending him six weeks in 2007 for modifying the front fenders.

“We’re pretty serious about the body configurations of the cars for all of the right reasons,” NASCAR Sprint Cup Series director John Darby said. “This one was a modification that had been made to the car that put it outside that box.”

On that topic, Howes told SBNation.com that the template doesn’t quite cover every square inch of the car and there is nothing written in the rule book to stop them. The rule book just states that the car must fit the templates that NASCAR specifies.

Hendrick added to that, telling ESPN.com, “You know, I don’t like it if we find some flagrant problem. I don’t like it when someone says I just don’t like the looks of it and never put the plate down on it.” Hendrick says that in speaking with Knaus, NASCAR never used the claw in determining whether the c-posts fit within the rules to begin with.

By section 20-2.1E of the rule book, it says that NASCAR is allowed to call teams out on parts that they modify. By having that one line in the rulebook, it allows NASCAR to influence judgment calls on certain situations.

Looking at everything, if the change to the car wasn’t made technically against the templates but isn’t something NASCAR didn’t approve of, couldn’t they had just requested the 48 team change it without further penalty? Beyond that, if they did want to penalize, does it warrant a penalty of this size?

As Eddie Gossage, who is the track promotor for Texas Motor Speedway, wrote at ESPNDallas.com, “It’s the first race of the year. It was the first time the team presented the car for inspection this season. Only one area of the car failed. NASCAR, rightfully, made the team make changes to the car so it will qualify and sit on the grid only after it completely passed inspection. The car will be 100 percent legal.

“Isn’t that the point of NASCAR’s pre-race inspection? The integrity of the race and the sport are not tainted. NASCAR found an infraction and caused it to be fixed.”

Though in a story that involves many sides, there is even more to be said here. Hendrick told ESPN.com before the Bud Shootout that this is the same car that Johnson ran in all four restrictor plate races last season. He added that the roof had not been altered.

He then continued to say that the car has been at NASCAR’s Research and Development (R&D) Center three times – after both Talladega races and before the Daytona 500 – and was returned without being said to be outside the lines. Looking back to last year if you look back at the October Talladega race, Knaus was caught on film telling Johnson to damage the rear end of the car if he won. Hendrick said that NASCAR took the car back to the R&D center and kept it there till the end of the season.

The only change that Hendrick says has been done to the car is it has been re-painted.

David Newton, who wrote the story for ESPN.com, asked Hendrick if maybe this is a response to the incident last year.

“Maybe you can put it together,” Hendrick said. “I don’t understand. The know the serial numbers on the cars. Our guys swear they have not touched the roof of the car.”

Some have already said that they believe that NASCAR is only implementing a penalty of this size due to Knaus’ track record, but isn’t that an example of a crew chief trying to find an advantage for their team? That is actually something that Hendrick Motorsports applauds their crew chiefs on as it shows that they are always trying to get better. So is it fair to access a penalty under those parameters?

Beyond this particular situation looking down the road, what about future situations that arise like this one? What if NASCAR sees something and lets it go? That will stir the fans as they will begin to question if NASCAR is playing favorites or not – is that a road that NASCAR wants to go down? The rule perfectly allows for this to happen with the interpretation that is there.

In this writer’s opinion, it looks like Hendrick Motorsports has put a solid case together to take to the appeal and have a good chance at winning. But after viewing all of the evidence known to the public, I’ll let you also say what you feel.