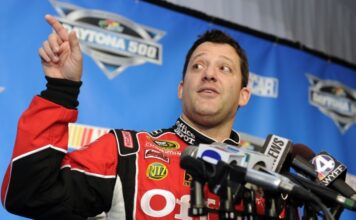 [/media-credit]After winning a championship, the conventional way of thinking is to keep the team the exact same way and take the same attack approach.

However, Tony Stewart went down a different route as at the end of the 2011 NASCAR Sprint Cup Championship season, he let crew chief Darian Grubb go. In exchange, he hired Steve Addington to become his crew chief for 2012.

Stewart felt the change was necessary after how they ran for the majority of the year.

“We kind of got in a slump last year and felt like we needed to make a change,” Stewart said during Texas Motor Speedway’s Media Day. “It’s definitely not uncommon in our sport to do that, but it seemed very odd to do it at the end of the year like that but we actually made the decision before the Chase started.”

Many people forgot that before the Chase started, Stewart’s average finish was 14.23 while he sat ninth in points with no wins. He was also saying that his team didn’t belong in the chase with the way they were running as he knew they wouldn’t be able to contend.

However, once they were in the Chase, it was like someone flipped a light switch as Stewart went on a terror, winning five of the 10 races and was crowned the champion.

“We ran well during the year; we just hadn’t got that win yet,” Stewart said. “It seemed that anything that could go wrong went wrong. But it seemed like when the Chase started we finally got all that bad luck behind us. We started strong at Chicago and Loudon was a track where Ryan (Newman) and I had run well there in the spring, so the first win at Chicago was kind of a surprise. We expected to run well at Loudon but I don’t think we would have planned or could have predicted we were going to get three more wins after that. It was a remarkable run.”

So far this season, Stewart hasn’t hit the magic stride yet as he finished 16th at Daytona due to a late race spin and 22nd at Phoenix due to a fuel pick-up issue.

The communication between him and Addington is still being tweaked, but going good so far.

“Like when I say, ‘it’s a little loose,’ he has to figure out how much a little means to me,” Stewart explained. “What is a little to me may be a lot bigger change to him. So it’s just figuring out when I say a little or a lot how much that actually is. I don’t think it will take really long. We worked really well together last weekend we just had some bad luck during the race. We had a solid day going.”

Despite it being early in the season, Stewart knows he needs to make a charge soon.

“There is really nothing to fall back on,” he said. “It’s nice knowing that we’ve got good notes; we’ve got good tracks coming up. Vegas was one last year where we had a dominant car and had a penalty with an air hose getting caught on the body work. It cost us a shot to win the race. It’s nice to go back to some of these tracks knowing we ran well at them. With this Chase format, you have 26 weeks just to get yourself in there so you can’t take it easy at the beginning of the year and think that you are going to waltz right into a spot in the Chase. You’ve got to get after it right away.”

Stewart went and selected Addington based on his time spent at Joe Gibbs Racing.

“I had known Steve through the (Joe) Gibbs (Racing) days when I was driving for (crew chief Greg) Zipadelli and (Steve) Addington was working for Kyle Busch,” Stewart said. “I had enjoyed working with him over there and when it came time to try and figure out who we wanted to look at I think it was a scenario where Steve was ready for a change and we were ready for a change. I think it was the right opportunity at the right time. I definitely knew Steve’s credentials because we had worked with him at Gibbs, so it seemed like a natural change for both of us.”

Stewart also looked to expand his organization further by continuing to look at Joe Gibbs Racing (JGR) by hiring Greg Zipadelli to be the Competition Director at Stewart-Haas Racing (SHR) and to crew chief for rookie Danica Patrick. Zipadelli was the crew chief for Stewart during Stewart’s entire time at JGR and won two championships with him.

It seemed like a natural selection for Stewart to hopefully bring success over to SHR. Beyond that, Zipadelli has helped Stewart transition from open-wheel to NASCAR so he was hoping that would choreograph over to helping Patrick.