Michael McDowell Races to California on a Wing and a Prayer 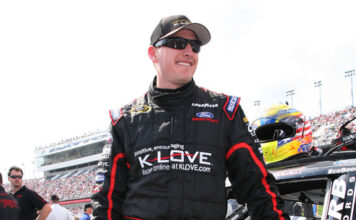 [/media-credit]NASCAR Sprint Cup driver Michael McDowell is headed across the country, on a wing and a prayer, to Auto Club Speedway for this weekend’s race festivities.

McDowell will be piloting his No. 98 Ford Fusion for Phil Parson/Curb-Agajanian Racing in California, thanks to a faith-based partnership with the Christian radio network K-LOVE and Curb Records.

“This year, we’ve been fortunate enough to get Curb Records and K-LOVE, a syndicated Christian radio network, to come on board,” McDowell said. “The cool thing about these partnerships is that there are things that I want to be involved, in not just from a racing standpoint but also personally.”

As with all sponsorship opportunities, the partnership started with an introduction that expanded into a solid relationship. For McDowell, the K-LOVE introduction was made by his friends at Motor Racing Outreach and grew from there.

“On the K-LOVE side of things, they invited my wife and I to come on the K-LOVE cruise,” McDowell said. “Right before Daytona, they have a Christian cruise, like a music cruise, to the Bahamas.”

“There happened to be an opportunity where K-LOVE wanted to be involved in NASCAR, not just from the racing perspective but also from the outreach perspective,” McDowell continued. “So, the other partners that came on board with K-LOVE made the sponsorship possible.”

“It’s cool how it all comes together.”

The partnership officially started this season at Daytona, where McDowell, working with friend and fellow Christian Trevor Bayne, raced his way into the show.

“The reach that we had in Daytona was huge,” McDowell said. “I got to work with my buddy Trevor Bayne a lot and we got a lot of exposure.”

“Because of that K-LOVE has seen a huge response to their sponsorship and message,” McDowell continued. “They will actually have a K-LOVE booth set up in the fan zone at several of the upcoming races.”

This past weekend in Bristol, McDowell and his team launched a new promotion with his sponsors. The campaign is called “Let It Start With Me” and is dedicated to bringing the gospel message to the NASCAR community.

“One of Curb Record’s artists No Other Name had a single called “Let It Start With Me,” McDowell said.  “The message behind it is instead of waiting for someone else to do it or get behind a cause, it should start with me.”

“Let me be the one that goes out and does it.”

McDowell and his team are now set to head to the other side of the country to race at Auto Club Speedway in California. And he admits that they need prayers to cope with the intense travel schedule, especially with such a small team.

“You go from Daytona, which got rain delayed so you’re already behind the eight ball,” McDowell said. “We only have five or six guys in the shop so when we lose a day, we lose a lot.”

“Then we went to Phoenix and Vegas without coming home and then to Bristol,” McDowell continued. “And now off we go to California.”

In addition to his faith, McDowell’s family, including his wife and three year old son, are also helping to cope with the rigorous racing schedule. And the driver announced that he has additional plans to add to his brood.

“My wife is expecting and is due in October,” McDowell continued. “And we are also still in the process of adopting two children from Honduras. That too is an opportunity to share that there are kids out there that need adopted and need a family to care for them.”

From his family to the race track, McDowell is blending his faith and sponsorship in unique ways that are most personal to him.

“This is so different from anything I’ve done in the past,” McDowell said. “This is something that I’m passion about, Christian music and outreach in particular.”

“To be able to partner with other like-minded groups is huge for me,” McDowell continued. “It’s natural and no one has to twist my arm to show up.”

“For me, this is who I am, what I believe in and what I’m passionate about,” McDowell said.