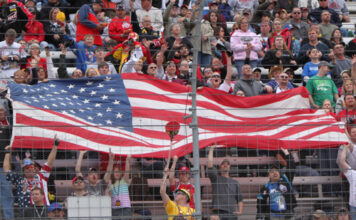 [/media-credit]Never let it be said that I don’t have an opinion. The events of the past week have been monumental for NASCAR. I think a lot of folks don’t realize that what has happened will change the way things are done inside the sanctioning body in Daytona Beach for a long time. Can you imagine that the day would come where a track owner would poll the fans to see what they wanted? Can you imagine the day when the sanctioning body would be embarrassed by its own hand-picked appellate officer? Lots of questions and more surprise and confusion.

NASCAR, though they are a dictatorship, has always prided itself as being fair. It doesn’t always appear that way, but that is the intention. Early on, they appointed an appeals committee made up of respected industry insiders. Teams also had the right to appeal to a one-man judge who could overturn any penalties somewhat like the United States Supreme Court of Appeals, except in this case, it’s not seven judges, but only one. NASCAR has always appointed former industry officials for this office. I can remember it was once Bunky Knudson, the former Pontiac and Ford CEO, and since it didn’t seem to matter over the years, I didn’t pay much attention after that. It seems that no matter how fair CAO John Middleton was in his decision in the Hendrick Motorsports/Chad Knaus vs. NASCAR case, some things were not well thought out.

Fans will immediately take sides because that is their nature, but NASCAR left some holes in their thinking. Why in the world would you name an executive from a manufacturer as your CAO? Further, why would you name an officer who had a personal relationship with some of the principals? Apparently Rick Hendrick spoke at Middlebrook’s retirement dinner. I’m not saying that this had anything to do with the decision, but it opens up a lot of questions in the minds of fans, other teams, and the media. What were they thinking? The fallout will be huge. Every penalty will be appealed to the CAO and the minute that someone, anyone, doesn’t get a “get out of jail free card” like the Hendrick team did, it will inevitably be because they weren’t John Middlebrook’s friend.

The boys in Daytona Beach have a lot of thinking to do over the next few months. What did they do wrong? Why did a panel of many decide the penalty should stand while the appellate officer decided that the penalty should be reduced? Why was the fine allowed and the points penalties and suspensions be waived, given the reputation of the principals involved? Complicating all of this is the fact that we’ll never know. If one appeals to the US Supreme Court (in the example I used earlier), there is a paper trail that reveals the thinking of the court. In this case, I don’t imagine anything else will come to light as to the thinking of the CAO. Game over and maybe game on.

This brings us to the whole Bristol Motor Speedway situation. The half full racetrack over the weekend, which I have commented on earlier, apparently struck a nerve with Speedway Motorsports owner Bruton Smith. After earlier statements that the low crowd, about half capacity regardless of what the “official” estimates were, was caused by bad weather (it rained in the morning, but cleared up for the race), the attendance at Saturday’s Nationwide race should have given the brain trust a clue. The near empty campgrounds should have been another clue. Smith has his underlings conduct a Twitter and email poll on what the fans wanted. The result was over 70% of fans not only didn’t like what they saw, but demanded that the track be put back in the configuration it was before the 2007 reconfiguration of the track. Always wanting to give the fans what they want, Smith declared last night that it would be done. How refreshing was that? But the media and some drivers protested. Smith was firm. “The fans are always right,” Smith said. We’ll see if it really happens, but I applaud Smith for listening to fans and not the competitors. Fans pay the bills, and over the weekend, not many were there. Yes, a crowd of 80,000 is pretty good, but in a place built for twice that, it had to hurt.

So for a year that started with a rain out, a big Monday night prime time race that had great ratings, and finally a great facility that appears to be decline. Lots of problems everywhere.

In my opinion, it’s a cop-out to blame everything on the economy as has been done for so long over these last four years. It’s time for the sanctioning body to take the bull by the horns. Bruton Smith reacted swiftly and decidedly, as he always does. It’s time for NASCAR to do the same I hope they do. I think they will, but all is not rosy.

Ron Fleshmanhttp://www.ris-news.com
Ron Fleshman has followed NASCAR racing since attending his first race at Martinsville Speedway in 1964. He joined the Motor Sports Forum on the CompuServe network in the 1980s and became a reporter for Racing Information Systems in 1994. In 2002, he was named NASCAR Editor for RIS when it appeared on the World Wide Web as www.motorsportsforum.com. He can now be found at www.ris-news.com. Ron is a member of the American Auto Racing Writers and Broadcasters Association. You can find Ron following and reporting on the top three NASCAR divisions each week. As a lifer in his support of racing, he attends and reports on nearly 30 events a year and as a member of the motor sports media, his passion has been racing for 47 years. He lives with his family in rural West Virginia and works in the insurance industry when not on the road to another track.
Previous article
NASCAR Craftsman Truck Series debut of the next generation’s driver, Jeb Burton
Next article
Michael McDowell Races to California on a Wing and a Prayer