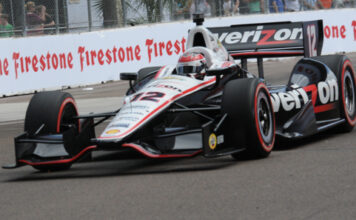 [/media-credit]Will Power drove his Chevy powered DW-12 Dallara chassis to a new circuit record during qualifying for tomorrow’s Honda Grand Prix of Saint Petersburg. Power set a time of 1.3721 (One minute, point 3721 seconds) to take the pole position for his third consecutive year on the streets of St. Pete.

“The Chevy was obviously the strongest engine.  We made a couple of adjustments for the Fast Six, and the car was really good.  I was able to get pole.” said Power, following his third consecutive pole at St. Petersburg.

Poweres’ Penske teammate Ryan Briscoe will join him on the front row.

“Really good effort to start on the front row with my teammate (Will Power). We’ve been pushing each other hard, as we always do.” Briscoe said.

Pagenaud was penalized for an illegal engine change after the final practice session and will drop back ten positions, Scott Dixon will move up to fill the vacant third row position.

Defending champion Dario Franchitti had problems during the final round of qualifying, and made contact with the tire wall. It will be determined if the car can be repaired, or if Dario will be forced to use a back up. If he goes to the back up he would have to defend his title by starting at the rear of this very quick field.

The Honda Grand Prix of St. Petersburg is scheduled to start Sunday March 25 at 1:00 p.m. ET with live coverage of the 100-lap event on ABC TV. Both the radio broadcast and live timing and scoring can be found on www.indycar.com.