Sam Hornish Jr.: I feel like we’re going to continue to work hard 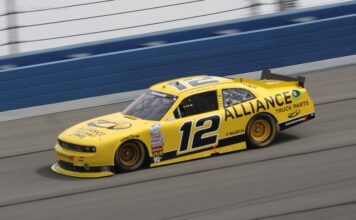 [/media-credit]After not having the warranted success at the NASCAR Sprint Cup Series level, Sam Hornish Jr. took a step back to the NASCAR Nationwide Series to spend some more time learning. Hornish proved his talent last year, winning the second last race of the season at Phoenix. Now he enters the 2012 season, ready to run the full schedule.

So far, it hasn’t gone as well as he would’ve hoped as he sits sixth in points, 54 points behind Elliott Sadler.

“We would’ve liked to have better results so far,” Hornish says. “But all in all, we’ve shown that we’ve got an opportunity to take a big step forward moving on out so looking forward getting through our couple off-weekends here and getting back to racing.”

Once he gets back going, Hornish is hoping to win some races and contend for the championship.

“I feel like we’re going to continue to work hard and try to get the results we want out of it,” he says. “We really have a good opportunity to bring a couple sponsors along, with Alliance Truck Parts and WURTH Group. They’re new to racing and sponsoring anything, so we have the opportunity to bring them along.” He adds that he hopes to make the transition back to the Sprint Cup Series.

Hornish made the move over to NASCAR full-time in 2008, driving for Roger Penske.

“It’s been a good relationship so far,” he says of the partnership with Penske. “Roger has always been really good to me and we started off back in 2003. When we started off, we had a couple goals in mind – we achieved the first couple, and now we’re working on the next one.”

One of the benefits to the Nationwide Series program at Penske is Hornish can lean on teammate Brad Keselowski, but he says that it works both ways as he can also help Keselowski if he is having problems.

“I kind of look at it that we’re both in the same boat and that we’re doing everything we can do to learn as much as we can to be successful,” he adds.

In continuing to work at his NASCAR career, one of the biggest lessons he learned in racing as a whole about attitude plays a huge factor.

“There’s a lot of about your attitude and a lot of about persistence and not wanting to give up and to continuing learning,” he says. “Racing is ever evolving; I believe you have constantly willing to learn and try new things. I guess that all goes with your attitude; you got to be willing to do those things. You got to have a good attitude, embrace the positives and remember a bad day at the race track is always better than a good day anywhere else.”

The 32-year-old started in racing, running go-karts to have something to do with his dad.

“All of the sudden it was 30 weekends a year and we were traveling all over the United States and Canada,” he says. “I continued to move up to ladder and eventually found myself in open wheel and after I achieved everything I wanted to achieve over there, I decided I wanted a new challenge and moved over to run stock cars.”

While racing in open-wheel, he won three IndyCar championships and the 2006 Indianapolis 500. Of the transition, Hornish says one of the biggest differences between open wheel and stock car is the people.

“In NASCAR, it’s called “stock car” racing, but there’s a lot more lien in the rules and what you’re allowed to do – geometries, set-up of the cars – that you’re not allowed to do in IndyCar,” he explains. “IndyCar is more of a spec race, where everybody has the same car. There’s sometimes when there’s different engines, but the package is the same and it’s really hard to gain advantage. Over here, it’s really easy to get yourself lost if you’re not doing the right things, just ‘cause there are so many things that you can change with the car itself. With all those things that you’re changing, you have to have the right people to be able to make the changes to help you move forward and allow you to kind of learn the things you need to be successful.”

Hornish says one of the biggest racing memories in his career was the Indianapolis 500 win, but there are also plenty of other good memories.

“There’s a lot of my favorite memories that don’t necessarily coincide with a win,” he says. “There just more of a good day at the track or involved in racing. Racing has always been a family sport for me; it started out as something to do with my dad. Now I take my family to the race track with me and hopefully some point in time, I can have the roles reversed when I’m watching somebody else race. But we’ll see how that all plays out.”

Besides spending time with family away from the track, Hornish enjoys building and restoring things.

“I restored a 108 barber chair a year ago and two years ago for Christmas, I redid my dad’s 1950 Swing Bicycle that he had,” he says.