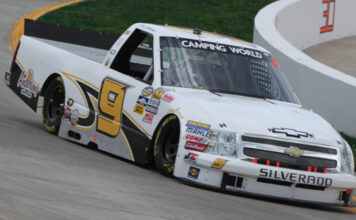 [/media-credit]This year marked a year of change for Ron Hornaday as he switched over to Joe Denette Motorsports (JDM) from Kevin Harvick Incorporated (KHI).

“Joe is a really pumped about his race team, and it’s quite an honor to drive for Joe and his whole family,” Hornaday says. “They are really dedicated to racing. They put two trucks in the Camping World Truck Series, and it’s an honor.”

Hornaday made the move from KHI to JDM as Kevin Harvick announced that he and wife Delana were closing the team. The change hasn’t been as drastic as anticipated as the trucks are still built in the KHI building.

“We lease the shop from Kevin and DeLana and got the fabricators and got Mark Smith doing the motors and all the support from Chevrolet,” Hornaday continues. “So it’s been a real honor to drive for him just because with Jeff Hensley and all the guys really getting the trucks prepared right.”

Hornaday says that Denette has an active part in the team as he is at shop as much as he can be.

“He’s got the No. 9 on the side for Bill Elliott,” Hornaday adds. “He’s really a big Bill Elliott fan, and he stays not only at the truck races, he stays for the Cup races where he shows up. So his involvement in racing, he wants to be a champion owner someday.”

So far this season, it hasn’t started out as Hornaday would have planned as he finished 14th at Daytona and 16th at Martinsville to now sit ninth in points.

This weekend marks NASCAR’s return to Rockingham Speedway, which last held a NASCAR sanctioned race in 2004. A lot of people are anticipating it to be a great weekend for NASCAR due to the history of the race track. Hornaday backs it up, stating the track has some of the same characteristics despite the repave.

“It’s still got the little whoop-di-dos on the bottom and the middle groove is pretty smooth and the top groove is really smooth,” he says. “But they still use the asphalt from down there where it still wears the tires out, so you’ve got to really be patient and control your truck for the whole run and figure out how many sets of tires to get in and see what you’ve got for the race and plan that out.

“It’s still old Rockingham, but it’s got a little narrower now where you can’t run real close to the wall because of the soft wall moving in. So there will be a different groove up there.”

It will mark the first time Hornaday has a raced a truck on the oval and he says the racing should be exciting.

“It’s going to put some exciting racing on because with the new tires you’re going to go out there wide open and then in a matter of five or six laps you’re going to start to really feather the throttle and try to save the tires,” he explains.

Hornaday hopes to have an advantage this weekend having Ted Musgrave as his spotter.

“He was so good down there,” Hornaday says. “He’ll be down there for the open test day where maybe he can teach me some patience and try to save these tires.”

SM Staff
Previous article
Time to Pass the Torch
Next article
Sadler: ‘It’s good for everybody’ to have Nationwide drivers running well, winning