Time to Pass the Torch 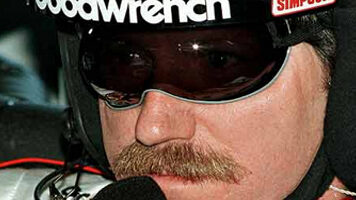 [/media-credit]It started with a question. Are there any numbers that should be retired in NASCAR? Sport teams regularly retire numbers. The New York Yankees have retired several numbers including Mantle and others. Major League Baseball has its share of retired numbers. Those I remember include guys like Tony Perez and many others I don’t seem to remember. It’s just the way it is.

On this day, the subject was the No. 3. Why does it always come to that? No subject can ever come to blows faster than the famous No. 3 that Dale Earnhardt drove. Never mind that Richard Petty won many more races (“he was a different era where they drove more races”) or that David Pearson had a better winning percentage. It’s a hot topic and always will be. Attending many races a year, long after Earnhardt’s death, many fans still come with attire with the famous Richard Childress Racing No. 3 logo. In the campgrounds around racetracks, the No. 3 flag is flown proudly and many still talk in almost religious tones about the black car and the man who drove it. Thus became the conversation.

There are two camps. One camp is of the opinion that the No. 3 should be retired. It was Dale’s number and with his seven championships and all the excitement that he brought to racing. He was the common man. The anti-Jeff Gordon and Jimmy Johnson who worked his way up the hard way and became a star. The other camp is of the opinion that Richard Childress, who fielded cars for Earnhardt should be allowed to us the number as he pleases, like letting his grandchildren use the number as will inevitably happen. Let’s look at the facts.

The number three has long been a fixture. Back in 1972, I attended a race at Martinsville Speedway where Junior Johnson was introducing Chevrolet to the fans. For years, the circuit had been dominated by Ford and Chrysler cars, notably Plymouth and Dodge. The introduction of a Chevrolet into the NASCAR circuit was big news. Johnson’s No. 3 Chevy didn’t win that day, but all eyes were on that white car with the red 3 on the side. This was long before Earnhardt came on the scene. Later on, Childress used the number in his own cars. Never mind that Earnhardt used numbers 2 and 15 before. It was the 3 that everyone remembers. His death on that fateful day at Daytona may have something to do with it, but I have to wonder a bit.

If any number should be retired, it might be the 43. Of course, it’s still being used because Richard Petty is still around and has a team. Maybe someday, and I don’t hope for this soon, that might be appropriate. NASCAR has never retired a number. You could make an argument for retiring the 21 because of the Wood Brothers. Another argument is that the 28 should be retired because Fearless Freddy drove the Holman-Moody car. Even the 71 should be retired because champion Bobby Isaac drove that orange Dodge. Truth is, numbers come and go. Yes, the 3 was an emotional number for many. For others the numbers mentioned above were special, but in the end they are just numbers just like Mantle’s, Perez’s and maybe even Michael Jordan’s famous number. Many drivers wore the No.3 as a badge. It’s time to give up on the numbers and appreciate racing today. No one will ever forget Dale Earnhardt and that number 3 car. No one will remember Charlie Glotzbach driving that same number or Cale Yarborough driving the No 21 (or many others including Neil Bonnett). Folks, it’s time to let go. NASCAR owns the numbers. One of Childress’ grandchildren will be driving that No. 3 soon. Be prepared. We will never forget Dale Earnhardt, but it’s time to pass the torch to the new generation

Ron Fleshmanhttp://www.ris-news.com
Ron Fleshman has followed NASCAR racing since attending his first race at Martinsville Speedway in 1964. He joined the Motor Sports Forum on the CompuServe network in the 1980s and became a reporter for Racing Information Systems in 1994. In 2002, he was named NASCAR Editor for RIS when it appeared on the World Wide Web as www.motorsportsforum.com. He can now be found at www.ris-news.com. Ron is a member of the American Auto Racing Writers and Broadcasters Association. You can find Ron following and reporting on the top three NASCAR divisions each week. As a lifer in his support of racing, he attends and reports on nearly 30 events a year and as a member of the motor sports media, his passion has been racing for 47 years. He lives with his family in rural West Virginia and works in the insurance industry when not on the road to another track.
Previous articleCale Gale Rockingham Speedway Event Preview
Next articleRon Hornaday: Smooth Transition to Joe Dennette Motorsports, so far