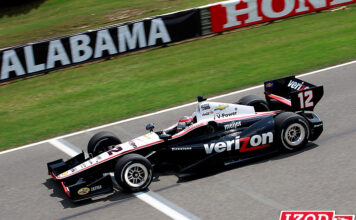 [/media-credit]Following the tear down and inspection of an engine, the majority of the Chevrolet team changed their motors on April 12th.

“We are still learning the limitations of the new engine controls calibration,” Chris Berube, Chevrolet Racing’s IZOD IndyCar Series program manager, says. “Through our testing in Sonoma, as indicated by an engine issue, we uncovered a problem that we believe could affect all engines. So, as a result, we feel it is prudent to change all engines prior to the start of the on-track activities this weekend.”

As per the IndyCar rulebook, each driver will be given a 10-grid position penalty prior to the start of the Toyota Grand Prix of Long Beach. The event is set to take on April 15th on the 1.986-mile, 11-turn temporary street circuit.

“We intently discussed the situation with our partners and our teams prior to determining that this was the best course of action to preserve the integrity of the racing in the IZOD IndyCar Series,” Berube continues.

The engine inspected was that of Hinchcliffe’s No. 27 GoDaddy.com car of Andretti Autosport after it had an issue during a test on April 9th at Infineon Raceway.

“I was already penalized the 10 spots before the decision to change out all Chevy engines,” Hinchcliffe says. “It’s a bummer, but now at least I’m not alone. There will now be some good racing happening mid-pack. The engine mileage rule is a tremendous engineering challenge and ultimately helps improve technology for the automotive industry.”

Teams are allowed to change engines if they have reached a minimum of 1,850 miles. However, if they choose to change them before, they are subject to penalty on rules 15.3.1 and 15.6.1.1.

“It would be easy to complain about how harsh (the penalty) is, but I think the attitude of everyone on the Go Daddy crew is that when the going gets tough, it’s time to nut up, buckle down and push hard for the best result possible,” he adds.

“It’s obviously not ideal, but we’re all playing by the same rules,” he says. “It’s the safest choice and, even though we’re starting at a disadvantage from the get-go, it’s better than potentially having an issue later on. It’s a learning process for all of us, and it’s not a decision they made lightly.”

Despite the issues, Chevrolet has had success this year as they have recorded two wins and two poles in the first two races with Castroneves and Power scoring one each. Castroneves leads the points, two points over Target Chip Ganassi Racing’s Scott Dixon, who is running a Honda powerplant.

Along with the issues for Chevrolet, the No. 7 Lotus Dragon Racing car driven by Sebastien Bourdais will also suffer the same penalty due to engine change.