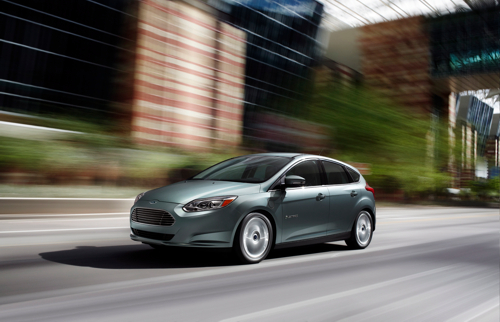 ·         Ford’s innovative marketing campaign for the 2012 Focus Electric continues as NASCAR selected the car to be the first-ever all-electric pace car, leading the field for the Sprint Cup Richmond 400 on April 28

DEARBORN, Mich., April 16, 2012 – Ford Motor Company is again making NASCAR history this month as the all-new Focus Electric becomes the first all-electric pace car to ever lead the field for a NASCAR Sprint Cup Series race at the Richmond 400.

The all-new Focus Electric will perform all pace care duties at Richmond International Raceway on April 28.

“Ford research shows the majority of Americans would consider buying an electrified vehicle but do not yet understand the different technologies,” said Mark Fields, president of The Americas. “Highlighting the Focus Electric as a pace car is a fun way to educate consumers about the kinds of benefits our electrified vehicles deliver and show people our commitment to provide Ford customers the power of choice for leading fuel economy in the vehicle that best meets their needs – from EcoBoost®-powered gasoline vehicles and hybrids to plug-in hybrids and full electrics.”

This marks the latest in a line of groundbreaking moments for Ford in NASCAR. In addition to being the first manufacturer to compete with a four-door sedan as its flagship model in 1998, Ford was also first to use a hybrid to start a NASCAR event when the Fusion Hybrid served as pace car for the Ford 400 at Homestead-Miami Speedway in 2008.

In January, Ford became the first manufacturer to show off its 2013 NASCAR race car when it unveiled the new 2013 Fusion racer to media in Charlotte, N.C.

The Focus Electric pace car will be unveiled for the public at the Virginia State Capitol in Richmond on April 25. Lt. Gov. Bill Bolling will deliver the Focus Electric to Richmond International Raceway, where it will serve as pace car for that weekend’s NASCAR Sprint Cup Series event.

“Our fans are customers,” said Jamie Allison, director, Ford Racing.  “And just like in racing, they expect both fuel economy and performance from their daily drivers, and that’s what Ford is delivering.”

The all-new Fusion range, which includes EcoBoost, a hybrid and the Energi plug-in hybrid version, is the best example of how Ford is giving customers true power of choice for fuel-efficient vehicles.

This year, Ford will offer nine vehicles reaching an anticipated 40 mpg or more. Plus, the company is building six new electrified vehicles by the end of this year.

“The Focus and Fusion are great examples of how we transformed our fleet of cars, utilities and trucks with leading fuel efficiency – by electrifying entire vehicle platforms, instead of one-off specialty models,” said Eric Kuehn, chief nameplate engineer, Focus Electric.

Ford will offer fuel-efficient EcoBoost engines in 11 vehicles in 2012, up from seven in 2011, tripling the production capacity of EcoBoost-equipped Ford vehicles. This expansion of fuel-efficient offerings will be led by the 1.6-liter EcoBoost engine in the high-volume Escape compact utility vehicle and Fusion sedan.

Delivering up to 20 percent better fuel economy than conventional engines, EcoBoost uses smaller overall size combined with turbocharging and gasoline direct injection to bring customers the power they want and the fuel economy they need.

Focus Electric is America’s most fuel-efficient five-seat car that offers the equivalent of 110 miles per gallon (MPGe) city, 99 MPGe highway and operates entirely on battery-generated power. Focus Electric has been certified by the U.S. Environmental Protection Agency to offer 105 MPGe combined.

By comparison, the Nissan Leaf is certified at 106 MPGe city, 92 MPGe highway and 99 MPGe combined. Focus Electric features more passenger room, more motor power and a faster charging system that can nearly halve the charging time of the Leaf.

Production of the Focus Electric began in December at Ford’s Michigan Assembly Plant in Wayne, Mich. More information about MAP can be found here.

Ford is ramping up Focus Electric retail production in the first half of this year for dealership availability in California, New York and New Jersey. By the end of the year, Focus Electric will be available in 19 markets across the U.S.

More information about Ford’s electrified vehicle lineup – including press releases, technical specifications and other related material – can be found online here. Photos of the Focus Electric can be found here.

“The Ford Focus Electric is a major statement of Ford’s commitment to bring green innovation and performance together, demonstrating for NASCAR fans how conserving the environment, creating jobs and strengthening our country can be made to happen without compromise,” said Mike Lynch, managing director of Green Innovation for NASCAR. “With the largest sustainability program in sports, the NASCAR family is proud of Ford Motor Company’s accomplishment with the Focus Electric pace car and what that means in terms of the tremendous impact of American innovation now and in the future.”

Ford Motor Company, a global automotive industry leader based in Dearborn, Mich., manufactures or distributes automobiles across six continents. With about 164,000 employees and about 70 plants worldwide, the company’s automotive brands include Ford and Lincoln. The company provides financial services through Ford Motor Credit Company. For more information regarding Ford and its products worldwide, please visit .