Surprising and Not Surprising: Kansas STP 400 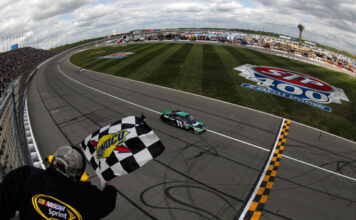 [/media-credit]From the command to start engine from Victory Junction Gang campers to Brad Keselowski manning the tank to rip up the Kansas track after the race ended, here is what was surprising and not surprising in the 2nd Annual STP 400.

Surprising:  While Kansas may be known as the Land of Oz, it was more like the land of highs and lows for this race day, with an extremely high number of engine failures and pit errors to a record low number of cautions.

Dale Earnhardt, Jr., driver of the No. 88 Diet Mountain Dew/National Guard, was one of the first to struggle on pit road, missing it completely as he attempted to pit early in the race. Other drivers, such as Kasey Kahne and Kevin Harvick barely made it to the pits after running short on fuel. And even five-time champion Jimmie Johnson had his own set of pit woes with his team struggling with a loose lug nut.

There were also an extremely high number of engine problems, affecting  drivers from Bobby Labonte and Mark Martin to four-time champion Jeff Gordon, all of whose engines either sputtered or just plain blew up completely.

And as for cautions, there were only three, the lowest ever for a Sprint Cup race at Kansas Speedway. Although there was the lowest number of cautions, on the flip side, the average speed was surprisingly the highest at Kansas, 144.126 mph, a new track record.

Not Surprising:  On the rough surface of the Kansas Speedway, it was not surprising that tires made all the difference in the outcome of the race. Just ask Martin Truex, Jr. whose tires fell off after leading 173 laps, costing him the race win and handing it to Denny Hamlin with just 31 laps to go.

With Truex’s tire troubles, Denny Hamlin capitalized, scoring his 19th victory in 231 Cup Series races. This was the No. 11 FedEx Ground Toyota driver’s second victory and fourth top-10 finish in the 2012 season. It was also the first time his manufacturer, Toyota, was in victory lane at Kansas.

“I knew that he was driving his heart out as well as I was driving mine,” Hamlin said. “What got me the lead was driving hard and that’s kind of where we were able to stretch it out.”

Surprising:  After scoring the pole position, it was surprisingly heartbreaking that the troubles that have been omnipresent for A.J. Allmendinger continued. The driver of the No. 22 AAA Dodge for Penske Racing went from race leader to a 32nd place finish because of engine troubles.

“Man, it’s just starting to feel like ‘Ground Hog’s Day’,” Allmendinger said. “We were off to such a great start and then the gremlins hit us.”

“Not sure how to explain it other than you’re on the pole one minute riding around leading laps and then the next thing you know your car isn’t right,” Dinger continued. “I just couldn’t believe it. Like I said, ‘Ground Hog Day.’

Not Surprising:  With his confidence growing, it was not surprising to see fellow Penske racer Sam Hornish Jr. have a respectable run in his one off deal for the team. The driver of the No. 12 SKF Penske Dodge scored a 19th place finish.

“We had a decent day,” Hornish Jr. said. “We led some laps and made a very respectable effort.”

“It was good to get back in a Cup car again.”

Surprising:  Since everyone wants to win in front of their friends and family, it was surprising that no home town heroes were in victory lane at Kansas Speedway. Carl Edwards, who was able to drive to the track from his home, finished ninth and Clint Bowyer, fellow Kansas native, had engine troubles, finishing in the 36th spot.

“It was just a major bummer,” Clint Bowyer, the driver of the No. 15 5-Hour Energy Toyota, said. “I just wish it wouldn’t have happened here.”

“It wasn’t a great result but a really good effort,” Edwards said of his run in the No. 99 Aflac Ford Fusion. “I wanted to win here more than anything but we get to come back.”

“It’s humbling and I can’t wait to come back,” Edwards continued. “We’ll do it.”

“It’s just when you have a target, it always makes it more challenging,” Gordon continued. “We’re trying not to put too much pressure on us with that and just trying to go out and do our thing and do our job.”

Surprising:  While Hendrick Motorsports struggled to reach their 200th win marker at Kansas, it was surprising to note that there is another quest for a 200th victory. The race winning No. 11 car in fact now has 199 NASCAR Sprint Cup Series victories, breaking a tie for most wins all-time with the No. 43.

Other drivers who have won in the No. 11 car include Cale Yarborough with 55 wins, Ned Jarrett with 49, Darrell Waltrip with 43, Denny Hamlin with 19, Junior Johnson with 11, Bill Elliott with 6, Geoff Bodine with 4, Terry Labonte with 4, Bobby Allison with 3, Buddy Baker with 2, A.J. Foyt with 1, Mario Andretti with 1 and Parnelli Jones with 1.

Not Surprising:  Greg Biffle, to no one’s surprise, has continued his consistently good runs. The driver of the No. 16 3M Ford finished fifth and more important maintained his points lead.

“It feels good to be disappointed with a fifth-place finish,” Biff continued. “Fifth is OK but we wanted to compete better on the race track.”