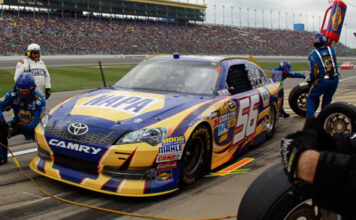 [/media-credit]Since he won his first career race at Dover in June of 2007, Martin Truex Jr. says the story of his career has been giving wins away.

None of them however, were as disappointing as Sunday afternoon in Kansas. Truex led 173 of 267 laps but after the team’s final pit stop was unable to overcome Denny Hamlin. Whether it was the appearance of the sun or the set of tires, the No. 56 didn’t drive as well as it had been and his late race charge wasn’t enough.

“It’s a little bit frustrating to be honest, but overall a good day for the NAPA team,” said Truex. “I guess if we can be disappointed with second it showed how far we’ve come as a race team. Just really proud of everybody at MWR and Toyota for helping us get where we are. The NAPA team was phenomenal today.”

Truex started the STP 400 from the sixth position but quickly moved into the lead by the races 40-lap mark. At times he held more than a five second advantage over competitors such as Hamlin, Kevin Harvick and Jimmie Johnson.

The NAPA machine was so strong that Johnson was never able to get around Truex, even though Johnson’s crew chief Chad Knaus was sure Truex would either mess up or the 48 team would beat him off pit road.

Neither happened, and Truex continued to set a strong pace. He looked untouchable and headed for his second career win. But the final pit stop changed everything, even though he came out ahead of Hamlin.

Truex told the team the car was “wrecking loose” and repeatedly said he wasn’t happy with the set of tires. With 30 laps to go Hamlin finally got around Truex for the lead and the win.

“I felt like today was a kind of day where I thought I was back and felt really strong that we’d have a car that could contend for the win going into the race and then be able to do that all day long, it was a good feeling,” said Truex.

“As disappointed as I am with this second place, this is a big day for us as a team. It’s kind of a statement for us that we’re here for the long haul; we’re here for the rest of the season. We’re not just a flash in the pan. We’ve been solid each week, and I know our wins are going to come, we just need to keep running like we are.”

For as disappointed and frustrated Truex was afterwards, he knew there was no place for his team to go but up. It will just take some time to get over what happened on Sunday.

But knowing that he’s a capable driver and that his team is capable of getting the job done, will help. It’s why Sunday left Truex with a difficult pill to swallow, knowing a win just slipped through their fingers and it wasn’t because they had made a mistake or made a bad adjustment to the car.

“But to put tires on and not touch the car and all of a sudden the car drives worse than it has all day, it is pretty frustrating when you haven’t won in a while,” he said. “But again, I’ve got I’ve got a lot of confidence in this team right now. I can’t thank Michael [Waltrip, owner] and Rob [Kauffman, MWR partner] and everybody at NAPA enough for allowing us to put this program together and to stand behind us for a few years to get it going.

“Good things are in the future for us, and I’ve just got to keep looking at that direction.”

His second place finish moves Truex to second in points, 15 points behind leader Greg Biffle. Next weekend the series heads to Richmond, where Truex led and had a shot to win last season before a loose lug nut forced him to make an unscheduled pit stop. He finished 27th and fired his team over the radio.

This year Truex is standing behind his team. Crew chief Chad Johnston has been a big part of it, Truex saying he’s one of the smarter guys in the garage but very quiet.

Johnston has become a great team leader says Truex, and since the two started working together the chemistry was there. They understand each other and Johnston knows what Truex needs.

So believing in Johnston is Truex, he said that down the road he’ll be known as one of the elite crew chiefs. First though, they need to start winning and Sunday was proof that they aren’t far away from doing so. It’s why they won’t be settling for second place anymore.

“No, not with a second, no doubt,” said Truex when asked if he was ever as disappointed with second before. “I’ve given wins away though and been this disappointed before. I can remember back at ‘07 Phoenix, we led about the whole race and the last time the caution came out we stayed out and everybody pitted.

“It’s kind of things like that that seem to be the story of my career since my first win. But again, I’m just proud of the team and proud of where we’ve come. To sit here and be disappointed with second is saying something for us. Just looking forward to coming back to the racetrack next week.

“I really enjoy working with this team. They’re doing a phenomenal job. I can’t even tell you how much fun we’re having to be honest. Once I get over the defeat in a few hours, I’m going to look at all the positives, and there’s a lot of positives we can take out of this weekend and so far this season.

“We’re not near as good as we can be yet, and we’re going to keep pushing forward and try to keep getting better. I know our wins are going to come soon.”