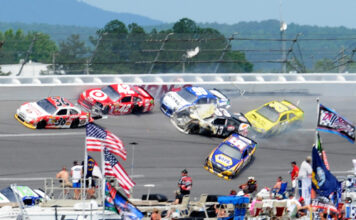 [/media-credit]For a long time I have said of Talladega and Daytona that they are multi-million dollar junk yards. This year was no different but this time it could all be laid at NASCAR’s feet.

In Daytona, in an effort to break up the tandem draft, NASCAR altered the grill opening and the radiator capacity and put a pressure valve in the cooling system of the cars. The purpose was to keep the cars from pushing one another for laps at a time. They lowered the rear bumper cover. They decreased the size of the spoiler. End result they broke up tandem drafting successfully and sent the teams back to pack racing.

No I have no problem with pack racing. It was certainly more exciting than surrey racing. But NASCAR did not take into consideration the change of seasons and climates.Talladega in the spring is much warmer temperature wise than Daytona in February. When they made no changes for the 90 degree ambient temperature in Alabama, they created a race situation that was hardly a race. A very sarcastic Tony Stewart said post race, “The racing was awesome,” Stewart said. “It’s fun to be able to race and have to watch the (overheating) gauges at the same time. It just adds that much more. Being able to make yourself run on the apron and everything to try to get clean air, it makes it fun.”

Teams spent most of the day monitoring water pressure and temperature gauges and trying to hold together engines that were overheating kind of like a boiling tea kettle. Basically the overheating situations made it impossible for the cars to race. At one point in the race Jeff Gordon said ‘My (water) pressure is way high. The temperatures are not flashing but I gotta get out of here.” How exactly do you get out of a pack that has 40 cars in it without wrecking 10 of them and yourself?

The temperatures affected the ability for teams to fuel the cars. Alcohol is lighter than the petroleum fuel and is much more temperature sensitive. When you add the humidity at Talladega you created a vapor lock type situation where the teams couldn’t get the car full of fuel. With no venting in the can or the system it makes impossible to force the air out of the system and replace it with fuel. Think about the finger on the end of the straw trick. If you heat the straw it doesn’t work as well. It’s more difficult to get fluid into the straw. Now I understand that DW is of the opinion that the fuel was vaporizing from the cars but that is simply not true.

What is true is that more and more NASCAR shows that its cost containment measures are merely a control of competition measure. The COT itself is more expensive to build. The new EFI system is much more expensive to build, monitor and maintain. And then to decrease the cooling capability of the car on an engine that now uses Ethanol which burns hotter than petroleum fuel you are asking to blow up and destroy very very expensive and highly specialized engines.

NASCAR needs to once again examine its mandates for teams on the Super Speedways. To force drivers to watch gauges and pressures in packs moving 190 mph is asking for disaster. To put them in packs, which they should, but take away the ability to keep the million dollar engines from blowing up because no air can get to the engine and the engine is trying to cool itself on 2 gallons of water is poor judgment at the very best. It creates situations that even the skills of the best stock car drivers in the world can’t maneuver out of.

Speaking of maneuvering, huge display of car control by Dale Earnhardt Jr in getting through the first wreck of the day by slicing and dicing his way through the carnage, it was just another example of the talent that is often overlooked behind the wheel of the 88.

Another point of contention this weekend occurred at the checkered flag in the Nationwide race. It was yet another blatant example of double standards in NASCAR. Sam Hornish, Jr. suffered a flat right front tire coming out of four and with the limited control that brings got into Danica Patrick who got into the wall. Patrick retaliated after the checkered flag going into one on the cool down lap and spun the car of Hornish into the wall.

NASCAR turned a blind eye to situation, even though when compared to video tape of the Busch/Hornaday incident in Texas they appear to be very similar. Busch as you will recall had been placed on probation for similar incidents and was then sat out for the remainder of the Texas weekend. Patrick however, was not even called to the trailer.

Let me just say that the touch me not attitude and the tantrums that are synonymous with Danica’s reputation are a result of sanctioning bodies not holding her to the same standards as every other driver on the track. It was those tantrums that made Indy Car breathe a sigh of relief when she left for NASCAR on a full time basis.

If you are going to climb in and race with the boys you have to expect to be treated exactly like one of them. Because when you climb in that car you are no longer male or female. You are a driver period. I was very disappointed that NASCAR didn’t at least issue a warning about the behavior. Especially in light of the fact that she once again crawls in a Cup Car at Darlington. To let this slide says it’s ok for her to continue this behavior. It is not ok for Kyle Busch or Kevin Harvick or Carl Edwards or Denny Hamlin but it is ok for Danica. Honestly folks that simply doesn’t fly. It does however add another color to the WWE palate that NASCAR has begun to resemble.

Congratulations to this weeks winners. Kyle Larson and Tracy Hines in USAC competition, Chad Kemenah and Sammy Swindell in World of Outlaws competition, Brandon McReynolds in ARCA competition, Joey Logano on his NNS win and Brad Keselowski on his Sprint Cup Series win.

Thoughts and prayers continue for Eric McClure and his family as he continues to recover after a very frightening crash during the NNS race on Saturday.