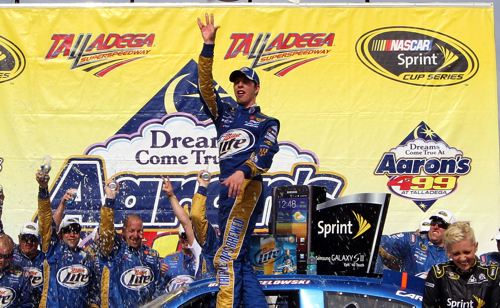 [/media-credit]From a rain-delayed beginning to the green, white, checkered finish, here is what was surprising and not surprising in the 43rd annual Aaron’s 499 at Talladega Superspeedway.

Surprising:  It was surprising that it took nearly 36 years for a Dodge to return to Victory Lane, with the last one being the Dodge win of Dave Marcos on August 8, 1976.

And thanks to Brad Keselowski, in the No. 2 Miller Lite Dodge for Penske Racing, the long winless streak for the manufacturer was finally been broken.

“At Talladega you don’t have a plan,” Keselowski said. “You go up front and you race your butt off all day.”

“You either get to the front or you don’t,” Keselowski continued. “That’s what we did.”

“Man it feels good to win here in Talladega,” Keselowski declared from Victory Lane. “I’m glad to come out on top with the Miller Lite Dodge.”

This was Keselowski’s sixth victory in 99 Cup races and his second victory and fifth top-10 finish in 2012. The driver has won twice before at Talladega as well.

Not Surprising:  Since it was Talladega, as well as Super Moon and Cinco de Mayo weekend, it was not surprising that crazy things happened, including many drivers watching the remainder of the race from the sidelines, due to everything from engine woes to multiple car pileups.

Even the most influential athlete and five-time champ Jimmie Johnson was not immune, succumbing to engine failure and officially retiring on Lap 110 with a 35th place finish.

Johnson spent the remainder of the race on his teammate Dale Earnhardt Junior’s pit box, rooting for that elusive 200th win for Hendrick Motorsports, which again was not meant to be.

“We lost the oil pressure there,” the driver of the No. 48 Lowe’s Chevrolet said. “We don’t know exactly what happened.”

Surprising:  In spite of celebrating his 20 year sponsorship with Dupont and 20 straight years with a pole, Jeff Gordon was NASCAR’s surprising biggest point’s loser. The four-time champion battled overheating all race long and was caught up in the ‘big one’ on Lap 141.

Gordon fell six spots, from 17th to 23rd, in the point standings. The driver of the No. 24 Dupont Chevrolet finished the race in the 33rd position.

“That was not fun,” Gordon said. “I didn’t like hitting the wall.”

“Man, this is just one of the most bizarre years that this Dupont Chevrolet and Drive To End Hunger Chevrolet team has ever gone through,” Gordon continued. “I mean, it’s almost comical at this point.”

Not Surprising:  As high as his teammate was for winning, it was not surprising that the other Penske Dodge competitor, A.J. Allmendinger was about as low as he could go.

The driver of the No. 22 Shell/Pennzoil-AAA Dodge went to block Denny Hamlin and the wreck was on. Allmendinger finished 15th after starting from the outside pole.

“My guys did a good job, fast motor, fast race car,” Allmendinger said. “I had a chance to win the race until it all went down the drain.”

“We had a chance to win,” Dinger said with abject disappointment. “I’m happy the 2 car won.”

Surprising:  At a track where the spotter is essential, it was surprising that the driver of the No. 5 Farmer’s Insurance Chevrolet was able to rebound for a good finish after losing his spotter Kevin Hamlin to laryngitis.

“We survived, that was the biggest thing,” Kahne said. “We missed the wrecks and got a good push there at the end.”

“We were catching the guys in front of us, but it was just too late.”

Not Surprising:   With the new rules changes by NASCAR designed to decrease the tandem racing and increase the pack racing, it was not surprising that many drivers were concerned about the cars overheating and the temperatures of the water and oil in the engines.

The unofficial ‘Mayor’ of the NASCAR garage, Jeff Burton, weighed in on the issue. The driver of the No. 31 Caterpillar Chevrolet was none too happy in spite of his tenth place finish.

“Not being able to race the way we want to race is frustrating,” Burton said. “Every time we would get in the pack, our water pressure would get real high.”

“We didn’t want to push water and that wasn’t a lot of fun,” Burton continued. “But we caught a lucky break when the caution came out and fortunately that helped us a lot.”

Surprising:  Kurt Busch, channeling his inner Ricky Bobby, had a surprisingly good run in his No. 51 Talladega Nights ME car. In fact, it was even surprisingly pleasant to listen to his radio chatter as he rattled off strings of dialogue from the movie.

Unfortunately, Busch was caught up in one of the late race crashes, relegating him to a 20th place finish.

“It was a good effort all day by the team,” Busch said. “It’s pretty disappointing to come to one of the places we have circled on the schedule, run well all day, and then have it end like this.”

Not Surprising:  Fresh off his second place finish in the Nationwide race, it was not surprising to see Kyle Busch, driver of the No. 18 M&M’s Toyota, finish in the runner up spot in the Cup race.

“For me, whatever Talladega and Daytona is, it’s a restrictor plate race,” Busch said. “That’s what we all know going into the weekend.”

“Some of us love coming here, some of us dread it,” Busch continued. “You don’t have control of your own destiny, I don’t feel like.”

Surprising:  When asked if he preferred the pack racing to the tandem drafting, Tony Stewart had a surprisingly ‘interesting’ idea for what he thought might just make the racing even better.

“We can stop at the half way mark, take a break and turn around and go backwards the rest of the way,” Smoke continued. “Then with ten to go, we split the field in half and half go the regular direction and half of them go backwards.”

Not Surprising:  NASCAR’s most popular driver gained a new moniker, ‘Mr. Consistent’, that is not at all surprising given the good start to his season. Dale Earnhardt, Jr. had another solid run, finishing ninth in his No. 88 National Guard/Diet Mountain Dew Chevrolet.

“This is definitely the most consistent we’ve ever been, or I’ve ever been,” Junior said. “I have a great team and they give me great cars.”

“It worked out and we ended up getting a finish, and not tore up and on the hook,” Junior continued. “I hope we can go to Darlington and keep our consistency going.”