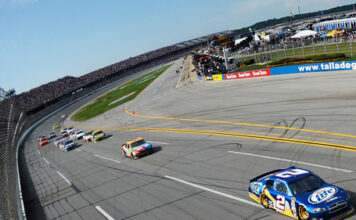 1. Matt Kenseth: Kenseth led with one lap to go at Talladega, but was passed by Brad Keselowski, benefitting from a huge push from Kyle Busch. Kenseth settled for third, and advanced one place in the point standings to second, seven behind Greg Biffle.

“My first thought was to say ‘Where’s the Biff?’” Kenseth said. “I didn’t mean to leave Biffle. Ask Carl Edwards. He’ll tell you that usually when I run away from a teammate, it’s on purpose.

“I just got too far out in front. That’s how it goes when you’re leading the field at Talladega. If you check out on the field, you better be ready to check up on the field. I was like my own debris caution.”

2. Dale Earnhardt, Jr.: Earnhardt finished ninth at Talladega, unable to muster the momentum needed for a late-race surge towards the front. He dropped one spot to third in the Sprint Cup point standings and trails Greg Biffle by nine. Earnhardt’s winless streak now stands at 139.

“The No. 88 Diet Mountain Dew Chevrolet was fast,” Earnhardt said, “but not fast enough to win. That’s been a familiar refrain for me lately. I hate to repeat myself, and that’s sad, because I’m getting pretty good at it.”

3. Greg Biffle: Biffle posted a solid fifth in the Aaron’s 499, leading 15 laps and running near the front for much of the day. On the green-white-checkered finish, Biffle pushed Matt Kenseth to a sizeable lead, but Biffle’s No. 16 couldn’t keep pace with Kenseth’s No. 17. With their draft connection lost, Brad Keselowski and Kyle Busch passed the Roush Fenway duo.

“But I’m still on top of the Sprint Cup point standings. At least we know one Roush Fenway driver can hold a lead.”

4. Kyle Busch: With one lap to go in the Aaron’s 499, Busch was in the driver’s seat, in second place, trailing race leader Brad Keselowski. But Busch never got close enough to even attempt a race-winning move, and settled for the runner-up spot. Busch moved up two spots to ninth in the point standings, 70 out of first.

5. Brad Keselowski: Keselowski, with a strong push from draft partner Kyle Busch, surged into the lead with a lap to go at Talladega, zooming past the Roush Fenway duo of Matt Kenseth and Greg Biffle. Keselowski held off Busch and won for the second time this year, and second career victory in the Talladega spring race.

“I got a big push from Kyle,” Keselowski said. “I’ll reiterate what I said at Bristol some years back: ‘Kyle Busch is an ass…..et.’ I’m not sure if Kyle follows me on Twitter, but he definitely follows me on asphalt. That’s two second place finishes for Busch for the weekend. Apparently, M&M’s melt in your hands, and under pressure.

“It was an extremely satisfying win for me. Not only did I win the race, but I was able to tweet from Victory Lane for the second time this year. Call it a ‘re-Tweet.’”

6. Denny Hamlin: Hamlin was fast all day at Talladega, and was prepared to make a charge after a restart on lap 192. Hamlin’s dive to the middle lane was cut off by a block from A.J. Almendinger, and the contact knocked Hamlin out of the race. He finished 23rd, and fell one place in the points to fourth, 27 out of first.

“I got dinged by the ‘Dinger,’” Hamlin said. “But that’s just the nature of racing at Talladega. You race all day, waiting for the ‘Big One.’ And, when it happens, you can usually blame the ‘Biggest One.’

“Trust me. I’d like nothing more than to seek revenge. But I can’t afford the penalty that is sure to follow. Therein lies the ‘Catch-22’ of catching 22.”

7. Tony Stewart: Stewart ended a frustrating day at Talladega with a 24th in the Aaron’s 499, as Stewart-Haas teammate Ryan Newman finished 36th. Newman suffered early engine trouble, while Stewart was KO’d in a nine-car wreck four laps from the finish.

“You probably heard about my tongue-in-cheek assessment of the racing at Talladega,” Stewart said. “That’s just my way of keeping my ‘tongue-in-check.’ For those too ignorant to understand sarcasm, call it Talladega Spites: The Ballyhoo Of Tony Stewart.”

8. Martin Truex, Jr.: Truex was collected in a lap 142 pileup started when Dave Blaney and Aric Almirola made contact. Truex’s No. 55 Toyota slammed into Jeff Gordon’s No. 24, ending the day for both. Truex fell one spot to sixth in the points, and trails Greg Biffle by 46.

“The No. 56 NAPA Auto Parts Toyota was running well,” Truex said. “Then, it all came crashing down. NAPA ‘know how’ suddenly became NAPA ‘no how.’”

9. Jimmie Johnson: Johnson suffered a broken oil pump that sent him to the garage just 61 laps into the Aaron’s 499. He finished 35th and fell two places in the Sprint Cup point standings, 54 out of first.

“We certainly don’t look like 5-time champions,” Johnson said. “Then again, who does?

“I watched the rest of the race from Dale Earnhardt, Jr.’s pit box. It’s quite a view from up there. You can see for miles, and somewhere in the distance, there’s a win on the horizon.”

10. Kevin Harvick: Harvick was caught in a lap 184 wreck that left his No. 29 Rheem Chevrolet unable to continue. He finished a disappointing 25th and is now fifth in the point standings, 45 out of first.

“We led one lap,” Harvick said, “so the car went from the front of the field to the back of the garage. Appropriately, with Rheem as our primary sponsor, we ran hot and cold.

“Brad Keselowski drove a heck of a race. He kept Kyle Busch behind him. Last year at Darlington, I couldn’t keep Busch in front of me.”