Penske sticking with Keselowski: ‘I wouldn’t trade him for anybody’ 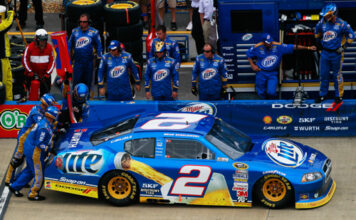 [/media-credit]Roger Penske has won a lot of races with many different drivers over the course of his NASCAR career. He’s had some of the best drivers in the sport drive his cars, represent his company and become big stars.

But Sunday afternoon when Brad Keselowski won at the Talladega Superspeedway, driving Penske and Miller Lite’s famous blue deuce, it was almost as if ‘The Captain’ was going through the motions for the very first time.

Keselowski, the 28-year-old Michigan native who’s in just his third NSCS season, delivered Penske his first win at Talladega and the first win for Dodge at the track since August of 1976. It’s why afterwards Penske was calling Keselowski, the 2010 Nationwide Series champion and six-time winner in the NSCS, a world-class driver among other things.

“I’d say that you certainly become a student of the game,” Penske said of Keselowski. “The fact that he slowed down there at the beginning to get Kyle [Busch] on that restart so they could get a run, then pulling on the outside of [Matt] Kenseth was amazing. Obviously with the moment, he was to pull it off.

“Kurt [Busch] does a great job, [Ryan] Newman is a great race, Rusty [Wallace]. If you look at the rules today, I would say he [Keselowski] ran a perfect race. He ran the bottom lane all day. When it was time to go, he had it figured out. For me, that’s what we hire these guys for, so it was a good job.”

Amazing and world-class were the two adjectives Penske used to many times describe Keselowski, who now sits 12th in points and looks to be a sure-fire lock for the Chase thanks to the wildcard format.

The win marked the second time Keselowski has visited Victory Lane in the still early 2012 season. It’s what has Penske looking toward the future and what else Keselowski might be able to accomplish, like helping him break through and win his first championship.

“I think he’s matured a lot,” said Penske. “He’s been a tremendous asset to the team, not just for Brad Keselowski, for Penske Racing. You can see when he comes in the shop; he’s spending a lot of time. I wouldn’t trade him for anybody right now.

“He came to me before he went to work for us, he said, I’d like to come to Penske Racing and help build a winning Cup team. He’s certainly demonstrated that from the driving ability. His chemistry with Paul Wolfe and that whole team has made a difference.

“That is not about the driver, the car, the sponsor, it’s about the whole team. He’s the real package. What we’re trying to do is give him everything we can to make him a winner. Obviously, one of the goals in my life is to sit up on that stage in New York or Las Vegas and I think he’s the guy that can make it happen this year, hopefully.”

Late last season he spoke about why he came to work for Penske, citing the man’s ethics, integrity and love of the sport. He knows that being surrounded by someone like Penske is the best thing for him and the goals he would like to accomplish.

Winning at Talladega was another step in the right direction. And according to Penske it all happened because Keselowski already had a winner’s attitude and because his best attribute is being a team player, helping everyone around him become better as well.

The move Keselowski made coming out of turn four to pull away from Busch and set sail for the finish line wasn’t a surprise to Penske because he knows how methodical and hardworking his driver is. Had it not been for Keselowski spending as much time behind the wheel, running the NNS program for Penske that might not have happened.

Racing on Saturday’s helps him learn for Sunday’s. And where Penske’s looking for Keselowski to finally bring him to the promise land, Keselowski’s eager to meet that challenge and make it happen sooner rather than later.

“It’s a large part of the reason why I came here to drive for him,” said Keselowski. “I want to be that first guy. I feel like he’s dedicated to making that happen. I look at some of the other elite car owners in the sport, and I don’t want this to be offensive, but to win another Cup championship for Hendrick or Richard Childress is not the same as winning the first for Roger Penske.

“That’s a whole different accomplishment. I think he’s certainly paid his dues in this sport, has that reputation, as a titan for a reason, and that is that he can get it done. I want to be the guy that proves it in the record books.”

Penske certainly wouldn’t take it for granted, just as he doesn’t take Keselowski for granted. He’s the complete package: winner, a fan favorite, sponsor friendly and most importantly, in a Penske Racing Dodge.

“When I look for a driver, I think the first thing we look at is does he know how to win races?” said Penske. “Brad obviously had that attribute when he came with us … He could have raced for other people. He came with us. At that point he said, I want to help you attract the best people.

“I said that to Paul [Wolfe, crew chief]. If the driver helps you attract the best people, a crew chief like Paul, you get stronger and stronger. I saw a driver that could win, one that was committed to the team, not just himself, and he has been good with all our sponsors. That’s the third element, you have to have, someone that is key from a commercial standpoint.

“When you put that all together, I wouldn’t trade him for anybody on the grid.”