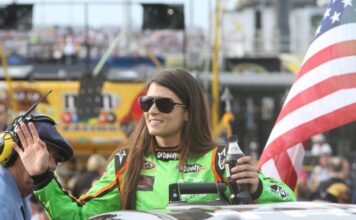 [/media-credit]With the NASCAR moms getting the race started with the command, here is what was surprising and not surprising from the 63rd annual Bojangles’ Southern 500.

Surprising:  Only one of three women to compete at historic Darlington, Danica Patrick achieved her goal of finishing the race.

And although the driver of the No. 10 GoDaddy.com Chevrolet finished 31st, she surprisingly finished better than at least one veteran driver, Jeff Gordon, whose bad luck, this time tire trouble and mechanical failure, continued to plague him yet again.

“I know I didn’t have a great result, but I accomplished all the things I wanted to accomplish,” Patrick said. “My goals were to be respectable out there and I think I held my own all right.”

“I earned my stripes anyway.”

Not Surprising:  As he took in the moment of celebrating his 200th win with his driver Jimmie Johnson, it was no surprise that Mr. Hendrick twice paid tribute to those that were lost in the plane crash and who helped build the team to have achieved that milestone.

“I had to get away,” Hendrick said. “They said that we were going to make it (on fuel), but I don’t believe them, you know?”

In fact, Hendrick whispered that plan to the driver of the No. 48 Lowes Chevrolet in Victory Lane as he bear hugged him several times.

The 200th victory for Hendrick Motorsports makes them only the second team, next to Petty Enterprises with 268 wins, to accomplish such a milestone.

Surprising:  It was certainly surprising to see so few cautions at the beginning of the race on a track whose moniker is ‘Too Tough to Tame.’

In fact, the yellow flag did not fly for the first 172 laps in Bojangles’ Southern 500, allowing the drivers to make three green-flag pit stop cycles in that run.

Not Surprising:  As is so often the case, it was not surprising that the last caution, late in the race to set up the green-white-checkered finish, set off some sparks.

The melee started when Kurt Busch, behind the wheel of the underfunded No. 51 Phoenix Construction Services Chevrolet hit the wall, which caused Ryan Newman, in the No. 39 Bass Pro Shops/Tracker Boats Chevrolet, to not only check up but get turned into the wall by Aric Almirola, in his No. 43 Verifone Sail Ford.

After the race, Newman and Busch had a confrontation, as did some of their crew members. But all was resolved, especially after intervention by the NASCAR officials.

“It’s a hot night,” Gibson continued. “Everybody settled down and talked about it. We’re all good.”

Newman put it more simply, “It all went bad there at the end.”

Surprising:  The Dodge team had a surprisingly rough night at the historic track, with both drivers encountering their own struggles. Brad Keselowski, in the Blue Deuce, battled back to score a 15th place finish, while A.J. Allmendinger, in the battered No. 22 Shell/Pennzoil Dodge, finished 33rd.

“I think we had a top-15 Dodge; I just tore it up early in the run,” Keselowski said. “I got loose and hit the wall pretty good.”

“We just struggled all night going from one extreme to the other, from so tight to just wicked loose,” Allmendinger said. “We could never find a happy medium.”

“The car was just a handful all night.”

Not Surprising:   The Toyota drivers had a surprisingly good evening with the ‘Lady in Black’, especially since the majority of them scored in the top-10 finishing order. Denny Hamlin, driver of the No. 11 Sport Clips Toyota, finished second to earn the status of highest-finishing Toyota driver.

Kyle Busch, in the No. 18 Wrigley’s Doublemint Toyota, finished fourth with Martin Truex, Jr., in the No. 56 NAPA Auto Parts Toyota, in fifth. The driver of the No. 20 Dollar General Toyota, Joey Logano, rounded out the top-ten for the manufacturer.

“It was a good day for our Sport Clips Toyota,” Hamlin said. “We just didn’t have quite the winning car today.”

Surprising:  Tony Stewart, reigning Champion, surprisingly still has not tamed that Darlington track, which is one of two where Smoke has not won. The driver of the No. 14 Mobil 1/Office Depot Chevrolet came close, however, scoring a hard-fought third place finish, his best ever at the storied 1.366 mile oval.

As with several drivers, Stewart battled fuel mileage at the end. But he had the added complexity of a clutch problem as well, making re-starts a challenge.

“I broke the clutch with about 85 (laps) to go there,” Stewart said. “And the fuel pressure light was blinking when we got the one-to-go signal.”

“We just got better as the night went on,” Smoke continued. “We weren’t good enough to win the race but I’m still pretty happy to come out of here with a third tonight.”

Not Surprising:  The Fords ran steady and consistent at Darlington, to no one’s surprise especially with the Ford of Greg Biffle scoring the pole for the evening. Matt Kenseth’s No. 17 Zestfully Clean Ford, finished sixth, with Carl Edwards, in the No. 99 EcoBoost Ford, finishing 7th.

Marcos Ambrose, in his No. 9 DeWalt Ford, overcame adversity and damage to finish 9th and pole sitter Biffle brought his No. 16 Ford to the checkered flag in the 12th spot.

Although the good run of team Blue Oval is not surprising, Marcos Ambrose’ post-race comments were most surprising. When asked where he came from after being two laps down to finish top-ten, the Aussie said, “I came from Mars.”

“Our team didn’t give up.” Ambrose said. “It was just a good night for us.”