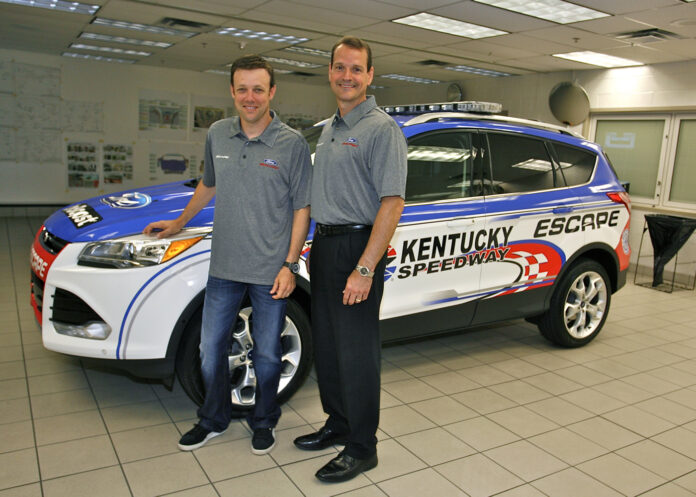 ·         Two-time Daytona 500 champion Matt Kenseth unveiled the pace car version of the Escape today in a media program at the Louisville Assembly Plant.

·         The race marks the Ford Escape’s debut as a pace car, the latest in a series of pace car firsts for Ford in NASCAR.

·         The 2013 Escape is being produced at the newly transformed Louisville Assembly Plant.

The Escape pace car was unveiled at the Louisville Assembly Plant by two-time Daytona 500 champ and Ford NASCAR driver Matt Kenseth, who was on hand to drive the vehicle for the first time as part of a media program outside the plant where the new vehicle is built.

“I am glad I got to be part of this ceremony today,” said Kenseth.  “Not only did I get a chance to drive the all-new Escape for the first time, but I had a chance to tour the new plant and meet some of the workers who built the vehicle, which was really neat.”

“They are proud of the new Escape, as they should be. It’s a really sharp vehicle that will look great leading the field at Kentucky.”

The Escape pace vehicle recently rolled off the assembly line at the newly-transformed Louisville Assembly Plant.   It’s just a short, one-hour trek to Kentucky Speedway where one of America’s best-selling vehicles will lead the field to the green flag in NASCAR.

“We’re delighted to highlight another exciting new vehicle to the huge and passionate NASCAR fan base,” said Jamie Allison, director, Ford Racing. “The all-new Escape is the perfect match for Kentucky Speedway because it is built in Louisville.

“The new Escape offers a blend of exciting styling and the performance attributes to handle the pace car duties that weekend,” said Allison.  “And we are sure there will be a lot of proud Ford workers in the grandstands who helped build the pace vehicle.”

Ford and its Cincinnati Region Area Ford Dealers are one of the original sponsor partners of the Kentucky Speedway, a relationship that began during the construction of the track in 1999.  Ford has been the only “official automotive vehicle” partner of Kentucky Speedway since the first race at the track in 2000.

This marks the latest in a line of exciting pace car debuts for Ford.  In addition to being the first manufacturer to use an all-electric pace vehicle with the 2012 Focus Electric which paced April’s NASCAR Sprint Cup race at Richmond, Ford was also the first to use a hybrid to start a NASCAR event when the Fusion Hybrid served as pace car for the Ford 400 at Homestead-Miami Speedway in 2008.

Ford also was the first manufacturer to unveil its 2013 race car model, when it showed off the ’13 Fusion to media in January of this year.

ABOUT THE NEW FORD ESCAPE

Since the original Escape debuted more than a decade ago, it has consistently been one of the best-selling vehicles in the Ford lineup.  The new Escape arrives in the market offering two EcoBoost engine choices and delivering up to 33 mpg highway. The Escape also boasts a wide array of clever technologies, including the hands-free liftgate, a new technology debuting in Escape which gives easy access to the cargo area without needing to set down packages or dig out keys.

In addition to providing more cargo volume than today’s model, the new Escape includes 11 features no other small SUV offers, and driving dynamics that make the drive experience more engaging on-road and a new Ford Intelligent 4WD System that provides even better traction off road.