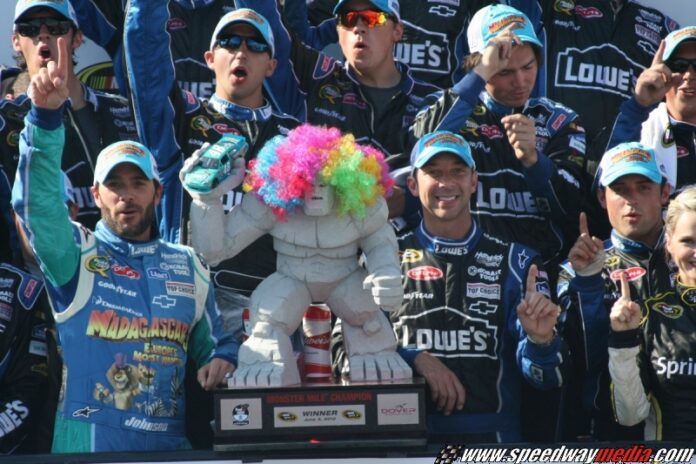 [/media-credit]While it was not surprising that the Monster Mile lived up to its reputation, with a major wreck in the early laps of the FedEx 400 Benefiting Autism Speaks, here are some of the other surprises at the Monster Mile in Dover, Delaware.

Surprising:  It was surprising just how serious race winner Jimmie Johnson, driver of the No. 48 Lowe’s Madagascar Chevrolet, was able to be about his record-setting run at the Monster Mile as he sported his rainbow-colored Madagascar wig in Victory Lane.

Johnson not only led 289 of the 400 laps for his seventh Monster Mile win, but he also tied the record of Richard Petty and Bobby Allison for most ever career wins at Dover International Speedway.

“I’m just proud of this hair,” Johnson said. “The hair really brought some speed to the team.”

“I’m never one that paid attention to stats,” Johnson said of his record-setting run. “I truthfully never thought I would be a guy that would build up any cool stats and here I am with some pretty cool stats, with legends of our sport and guys that I’ve looked up to.”

Not Surprising:  Kevin Harvick, behind the wheel of the No. 29 Jimmy Johns Chevrolet, was also happy in spite of have some pit road miscues and not quite closing the deal on the race win. Harvick came in second, his 10th top-10 finish in 23 races at the Monster Mile.

“Yeah, we had a solid race,” Harvick said. “I made a mistake on pit road there and got us back to about 20th.”

“The car was good enough to be able to drive back through the pack.”

Surprising:  It was surprising that the two drivers named Jeff, both Jeff Gordon and Jeff Burton, had strong race cars but continuing bad luck runs.

Jeff Gordon, who has struggled all year in his No. 24 Dupont Chevrolet, was leading the race when he felt a tire going down. Jeff Burton on the other had had an engine fail in his No. 31 BB&T Chevrolet.

“We definitely had a loose left rear,” Jeff Gordon said. “It didn’t go on right to begin with and the left-rear tire-changer knew that.”

“And so when I started to complain about it, we knew that there might be an issue and there was,” Gordon continued. “So, in some ways we got fortunate today. I could have stayed out there and wrecked because it wasn’t really vibrating. It was getting real loose.”

“We broke an engine here, but it just is what it is,” Burton continued. “The monkey is on us right now.”

Not Surprising:  The equation of Dale Earnhardt, Jr. plus a Hendrick Motorsports race car equals consistency continued at the Monster Mile. The driver of the No. 88 AMP Energy/Diet Mountain Dew Chevrolet had yet another top five run, finishing fourth and moving to third in the point standings, just ten points out of the top spot.

“We are getting close and finishing good when we are not winning,” Junior continued. “It was a good day for us, a good points day.”

Surprising:  It was surprising to see Kyle Busch out of the race, suffering engine failure in his No. 18 M&M’s Toyota. Busch finished an uncharacteristic 202 of the scheduled 400 laps and finished 29th.

“Unfortunately, we had a valve spring break in the engine, which hit the pistons,” Busch said. “It’s real unfortunate.”

“I hate it that we give a post-race interview this way, rather than finishing.”

Not Surprising:   It was not surprising, however, to see the other Busch, big brother Kurt, self-destruct yet again. Kurt Busch incurred two pit road penalties and then also had an engine failure, finishing 24th in the No. 51 Phoenix Construction Services Chevrolet.

Worse yet, after the race, Busch was suspended for the upcoming race weekend at Pocono due to a verbal altercation with one of the NASCAR media corps, Bob Pockrass of Sporting News. His probation was also extended until the end of the year.

“I accept NASCAR’s decision,” Busch said. “I put them in a box, they had to take action and it’s my fault for putting them in this position.”

“I apologize for the comments I made to Bob Pockrass.”

Surprising:  It was surprising that ‘Concrete’ Carl most certainly did not live up to his reputation at the Monster Mile. Edwards, driving the No. 99 Subway Ford, hit the wall on Lap 165, finishing 26th.

“This is such a fun race track and the car was so good,” Edwards continued. “I am really frustrated our day got cut short.”

Not Surprising:  Teammate Matt Kenseth had another solid run in his No. 17 Best Buy Ford to no one’s surprise. Kenseth finished third, posting his 18th top-10 finish in 27 races at Dover, and now sits just one point out of the top spot in the point standings.

“Yeah, our finish was really good,” Kenseth said. “Our end result, can’t really complain about that.”

“I am happy to come home third with a car that didn’t drive the way we wanted it to.”

Surprising:  For the first time in a Sprint Cup car at the Monster Mile, Aric Almirola had a surprisingly good run. The driver of the No. 43 Jani-King/Smithfield Ford Fusion finished the race in the sixth position.

“I would say that is pretty respectable for our first time here,” Almirola said. “It was a great day for everybody on this Jani-King Smithfield Ford.”

“I am proud of everybody and we had a really good run.”

Not Surprising:  It was not surprising that the biggest winners of the Monster Mile weekend were all of the children with autism and their families who got to not only attend the race but do so in a special area of the grandstands conducive to dealing with their challenges and where they could meet some of their NASCAR heroes.

“I know that I really appreciate what Dover International Speedway and the Autism Speaks group does to host all the families for this event,” Jamie McMurray, driver of the No. 1 Bass Pro Shops Chevrolet and an autism spokesman, said. “I am just glad that I can do something to help this cause.”