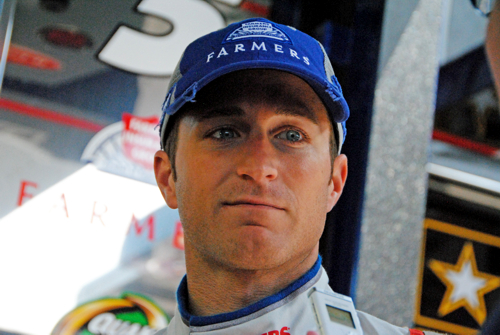 [/media-credit]From an abysmal 29th place finish at Daytona and with even more bad luck in the next few races at the start of the season, Kasey Kahne has made a phenomenal turnaround, with top-10 finishes in the last seven races and a win in the Coke 600.

So, there is no wonder that the driver of the No. 5 Farmer’s Insurance Chevrolet for Hendrick Motorsports is riding high on the wave of momentum.

“Well, momentum and confidence has a lot to do with running well in racing and being up front,” Kahne said. “Our team has been building that momentum and seems like we get more of it each week.”

“So, it’s been really positive,” Kahne continued. “It’s tough to do this without momentum and confidence and once you get it, it can really turn your season around.”

Kahne is also riding the wave of momentum as the rookie member of the Hendrick Motorsports team. He joins teammates Jimmie Johnson, who won last weekend’s race at Dover, and Dale Earnhardt, Jr. who is third in the point standings, in the HMS surge.

“I feel like our company is really strong right now,” Kahne said. “The cars are great. The engines are great.”

Kahne does, however, feel for one of his Hendrick Motorsports teammates, Jeff Gordon, who is struggling even more than he has this season. But he thinks that the driver of the No. 24 Dupont Chevrolet just has to gut it out before he too finds that momentum upswing.

“Jeff’s been as fast as any of us but he just hasn’t had the best of luck,” Kahne said. “I have no advice for Jeff.”

To what does Kahne attribute his own turn-around and momentum-gathering?

“We’re just getting a little more familiar with things,” Kahne said simply. “At the start of the year, we were probably as fast as we are right now but we just weren’t able to finish the weekends off.”

“We’ve been fortunate enough the last six or seven weeks to put the full race together and finish it off,” Kahne continued. “It’s been a lot better for us.” [/media-credit]Kahne admits that, because of his difficult season start, his momentum currently has also helped his position in the point standings, with potential to even make the Chase. Kahne sits currently in 14th in points, with the one win.

“Well, I’ve had to think about the points as bad as we started out,” Kahne said. “We were getting ready to miss races, we were so far back in points.”

“So, I had to think about points and where we’re at and how to get back in the hunt,” Kahne continued. “And we’ve been able to do that. So, we’ve got to keep that mentality the rest of the season.”

Has the point situation changed the way Kahne races?

“Well I mean in certain situations, you probably are more cautious because you know what the end result can be if you’re not,” Kahne said candidly. “So, at times you need to be cautious and at other times you just race as hard as you can.”

“And if you don’t race as hard as you can with this group of guys, you’re going to get passed or left behind,” Kahne continued. “So, it’s tough.”

“You just think about points in certain circumstances,” Kahne said. “But other than that, you race as hard as you can.”

Kahne is looking forward to continuing to ride the wave of his momentum at Pocono Raceway, especially on the repaved track and with the shortened race format.

“The repave is perfect,” Kahne continued. “It’s as nice as I’ve seen and felt and the transitions on the track are really good.”

“Hopefully we can get enough rubber on the track to create some racing,” Kahne said. “I know as time goes on the track will open up and be a really good one to race on but the first one’s going to be tough.”

“But with the two days of testing prior to the race weekend, it will really help everything and hopefully we’ll be able to do some passing on Sunday and move up if we have a car that can move up.”

While Kahne acknowledges that Pocono will be a challenge, particularly with the one groove currently and the chaos expected in the turns, he knows that with time the track will be even better.

“It will slowly rubber in and open up and you’ll be able to pass but it will be a little more difficult than what you’d want as a driver and as someone running a race track,” Kahne said. “But when you have a repave, it takes a little bit of time and that’s part of it.”

“Eventually it’s going to be really good,” Kahne continued. “But on Sunday, you’ll be able to pass but it will be difficult at times.”

“Yeah, I think Turn One will be utter chaos,” Kahne said. “The big thing will be making sure you’re in a good position off the corner to where you can be in a good spot getting to the Tunnel Turn.”

“That’s where you’re going to be where it’s going to be treacherous, especially if you try three-wide.”

Kahne’s wave of momentum also continues off, as well as on, the track. The young driver has also been busy with a variety of events run by the Kasey Kahne Foundation, created in 2005 to help chronically ill children and disadvantaged youth.

“Our Foundation is doing well,” Kahne said. “We’re setting up different events and things to make sure we raise some money each year.”

“The ‘Five Kahne 5K’ will be in October again during the Charlotte weekend, which is always pretty cool,” Kahne continued. “A lot of people in the Charlotte area really enjoy it.”

“We have a lot of fun running and trying to raise some money to put some smiles on some kids’ faces.”