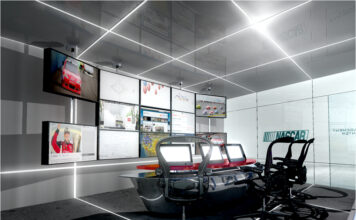 DAYTONA BEACH, Fla. (June 22, 2012) – During its NASCAR Fuel for Business Council Meeting today in San Francisco, NASCAR announced plans for the development of the Fan and Media Engagement Center (FMEC), a resource that will enable the sport to better serve the industry, media and fans through a platform that facilitates near real-time response to traditional, digital and social media. HP Enterprise Services has been selected as an exclusive partner in the development.

“The Fan and Media Engagement Center will leverage industry-leading technology from HP in order to better engage with the massive community that is the NASCAR fan base,” said Steve Phelps, NASCAR senior vice president and chief marketing officer. “This is a clear example of our commitment to using cutting-edge technology to better inform our sport. Ultimately, this tool will help our industry connect with media and fans more effectively and efficiently.”

NASCAR will design the engagement center in collaboration with HP to be a dynamic tool that is specially tailored to meet the evolving needs of NASCAR’s unique industry. In addition to listening to and engaging with fans in real-time around NASCAR content, the center will provide 360-degree traditional media monitoring.

The FMEC will provide NASCAR the ability to monitor, analyze and better understand the current media landscape more clearly in order to respond more rapidly to national, local and global media.

Measurement also will be a key function of the Fan and Media Engagement Center. Those capabilities will expand across qualitative and quantitative measurements and include tonality, volume, proximity and other coverage attributes in regular reports the FMEC will generate.

NASCAR will work with HP to identify industry-leading third-party partners to deliver data and information into the FMEC. The center will be staffed and managed by the NASCAR Integrated Marketing Communications team and collaborate closely with NASCAR Digital Media. Located on the same floor as NASCAR.com in offices at NASCAR Plaza in Charlotte, N.C., the FMEC is slated for testing in October, with a full rollout expected by the start of the 2013 NASCAR season. The center will be housed in a 500-square-foot, glass-enclosed area, outfitted with state-of-the-art touch screens, television monitors and multiple seated viewing areas and work stations.

NASCAR is committed to being a leader in innovation and this new center is the latest example of investments in technology designed to benefit the sport.

For conceptual renderings of NASCAR Fan and Media and Engagement Center, click the below links. (Photo credit: HP and NASCAR)

The National Association for Stock Car Auto Racing, Inc. (NASCAR) is the sanctioning body for one of North America’s premier sports. NASCAR races are broadcast in more than 150 countries and in 20 languages. In the U.S., races are broadcast on FOX, TNT, ABC/ESPN/ESPN2, SPEED and SiriusXM Satellite Radio. NASCAR fans are among the most brand-loyal in all of sports, and as a result more Fortune 100 companies participate in NASCAR than any other sport. NASCAR consists of three national series (the NASCAR Sprint Cup Series, NASCAR Nationwide Series, and NASCAR Camping World Truck Series), four regional series, and one local grassroots series, as well as two international series. Also part of NASCAR is Grand-Am Road Racing, known for its competition on road courses with multiple classes of cars. NASCAR sanctions more than 1,200 races at 100 tracks in more than 30 U.S. states, Canada and Mexico. Based in Daytona Beach, Fla., NASCAR has offices in eight cities across North America. The next NASCAR Sprint Cup Series race, the Toyota/SaveMart 350 at Sonoma, will air June 24 on TNT at 3 p.m. ET. For more information and a complete schedule, visit www.nascar.com. Follow NASCAR on www.facebook.com/NASCAR or on Twitter: @NASCAR.

HP creates new possibilities for technology to have a meaningful impact on people, businesses, governments and society. The world’s largest technology company, HP brings together a portfolio that spans printing, personal computing, software, services and IT infrastructure to solve customer problems. More information about HP (NYSE: HPQ) is available at http://www.hp.com.

Larson captures the Bristol Night Race; Playoff’s Round of 12 is set