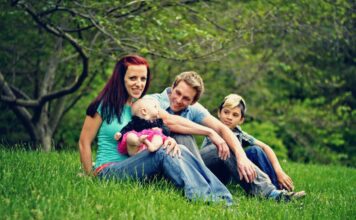 [/media-credit]Amanda Speed is not only juggling the role of wife to NASCAR racer Scott Speed, but also being a new mom to their daughter Juliet.

And while she misses being as consistently present at the race track and as involved in Scott’s career, she is enjoying all the challenges of having a little one in the house and, in fact, looking forward to planning for another.

“It has changed everything, let me tell you,” Amanda Speed said. “You think you remember, but you don’t. You can’t even take a shower unless you have her occupied somehow.  But it’s fun.”

“She is not sleeping at night so we’re not getting any sleep,” Speed continued. “She likes to eat a lot so she eats every two hours at night.”

While Speed loves being a new mom, she has indeed missed going to the race track with her husband. Yet, traveling with a baby has brought its own set of challenges.

“Not being able to go to the track as much has also been an adjustment,” Speed said. “I went to Texas earlier this year with her and, man that was a handful.”

“Since we don’t have the motor home anymore, when she took a nap we had to go sit in the car,” Speed continued. “She loves the noise and thinks it’s cool, but it’s just more of a hassle now.”

“Between the plane ride and the time change, it’s just a lot different now that she’s here,” Speed said. “You don’t realize how difficult it is taking her to the track until I did it.”

As if the Speed family did not have enough stress in their lives, they also recently moved to another home, closer to family.

“That was the most stressful thing I’ve ever done,” Speed said. “We’ve been looking to move closer to family and found the deal we wanted.”

“So, we ended up moving,” Speed continued. “Jules cannot crawl yet and I’m glad she can’t, especially as we moved.”

“I don’t recommend moving with a baby to anyone.”

Although Juliet is Amanda and Scott’s first child together, Amanda is also mom to son Rex. And she admits that she couldn’t handle new motherhood without the help of Juliet’s big brother.

“Rex loves being a big brother,” Speed said. “If I need help, he is like taken her under his wing. He is so good with her I can’t even explain.”

While Rex may be the doting big brother, husband Scott has definitely embraced the new daddy role as well.

“It was funny because when I was pregnant, Scott was always real squeamish,” Amanda Speed said. “He loved me being pregnant but he thought he would be the one passing out during the birth. But he pulled her out and changed her first diaper.”

“This morning she looked at him and said ‘Da da’ and he just melted,” Speed said. “When she can really start talking and say ‘I want, I want’, we’re going to be really broke.  He won’t be able to say ‘no.’

“He’s a big kid too,” Speed continued. “I always say I have three kids.”

While keeping extremely busy juggling the new home and the new baby, Amanda Speed has also tried to stay as involved as possible in husband Scott’s racing career. And she admits that has had many ups and downs, from the not so easy parting of the ways with Red Bull Racing to now running part-time with Leavine Family Racing in the No. 95 race car.

“I try to be involved as much as we can,” Speed said. “We have more people helping us now but I still do his schedule and communicate with the team.”

“In the beginning, it was hard,” Speed continued. “Running part-time and with a new team, there’s a lot of unknowns and a lot of ‘what ifs’.”

“But they have figured each other out and are running really well now together,” Speed said. “Things are much better now.”

“The team believes in him and he believes in the team,” Speed continued. “It was definitely a struggle at first but now things are starting to click. Everyone is excited and pumped up every weekend.”

The couple has also learned many lessons together as they have endured the ups and downs of NASCAR racing. They have a sense of closure now that the Red Bull lawsuit has been settled and is in their rear view mirror.

“Obviously we can’t go into detail about that, but the fact that the lawsuit was closed gave Scott closure,” Speed said. “That’s what he needed because he was pretty pissed off at the way it ended.”

“But in the end, they came to terms with each other and that brought a ton of closure and a weight off his shoulders,” Speed continued. “The whole process wore on both of us, so much. It was the most difficult thing we’ve gone through together for sure.”

“We’ve learned you can never fully put your trust in anyone, so you have to just back each other,” Speed continued. “Scott and I are our own best friends.”

“Certain friends we have had out there, we also didn’t expect the things to have happened that have happened,” Speed said. “So, I guess to say to just trust and believe in each other and not put your trust in anyone else is the biggest lesson learned.”

While Amanda Speed has been taking it one day at a time with juggling her role as racing wife and new mom, she also is very much looking forward to the future, personally and from a racing perspective.

“In my crystal ball, we are getting pregnant again quickly,” Speed said. “If it were up to Scott, he would probably be pregnant right now and have a whole litter.”

“And I’m pretty sure things are going better with the team and I hope we can find more sponsorship to run more races,” Speed continued. “This team really, really wants to run the whole season.”

“So, hopefully the crystal ball brings sponsorship and a full season of racing.”

“We’re in a good place right now,” Speed said. “Everyone believes in each other right now.”

“It’s good that Scott’s getting his fire back in his belly,” Speed continued. “He felt like he lost a lot of that and he’s up for proving himself again.”

“So, hopefully we’ll be back racing competitively and have lots of children around us.”

As Amanda Speed continues her juggling act, she has just a few words for the Amanda and Scott Speed fans.

“I’d like to say thank you for supporting us, especially through everything we’ve been through,” Speed said. “There are some die-hard fans and they still believe in us.”

“Thanks for sticking with us and for understanding us.”