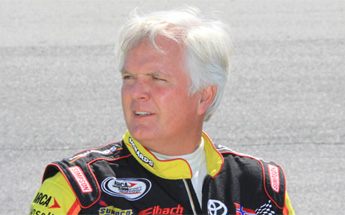 [/media-credit]After going 75 races without a win, Frank Kimmel would get by rookie Mason Mitchell with 44 laps to go and held the field off in a late race restart for his 75th career win in the Messina Wildlife Animal Stopper 200 presented by Federated Car Care at Lucas Oil Raceway.

“It’s hard to get here some times,” Kimmel says. “I’ve got to thank this team and sponsors Ansell and Menards. I’d like to take a lot of that credit but we had a good handling race car. I could turn and cut into traffic and run into the flat, whatever I needed at the end. That made the difference. This is a hard place to drive around and a really hard place to pass people. That’s what makes it special.”

Tom Hessert finished second after running in the top five throughout most of the night and making a late race pass on Mitchell for second after Mitchell spun the tires.

“We had a really solid night,” Hessert says. “Kenny  (Schrader) and the guys gave us a good car today. We worked at it in practice. At the start of the race, we were a little tight and got it back to pretty good by the end.”

Kevin Swindell was third after making his way through the field late in the race after getting off sequence, contact with Mason Mitchell and a late race pit stop to fix that. He’d drive from 11th to third in the final 40 laps.

“We got off sequence and had to work our way through the field,” Swindell says. “Had an issue with the 32 (Mitchell) and came back to finish third.”

Brennan Poole finished fourth, just ahead of Mason Mitchell and Ryan Reed. Mitchell had battled for the lead for much of the race, though spun the tires on the late race restart with three laps to go.

Justin Lofton was battling for the ninth position late in the race, when he’d spin trying to make a three-wide pass by Mingus and Gallagher. He’d finish 11th.

Chad Hackenbracht had run up front during the first half of the race, leading a number of laps, before engine problems put the No. 58 out of the race. He’d be credited with 25th.

“Seems when everything is going good for us, we always find some bad luck,” he says. “Had an engine bad, don’t know what happened. After Kimmel got by me, it started going sour.”

Pole sitter Matt Crafton would also run into bad luck while leading as he led the opening 52 laps before the loss of brakes on his No. 88 Toyota would put him into the wall. Crafton would finish 31st.

The next race for the ARCA Racing Series is the Pennsylvania ARCA 125 at Pocono Raceway on August 4th.