Zack Jarrell Saving the Ocean One FASCAR Lap at a Time 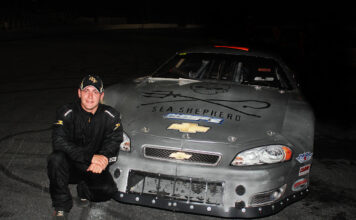 So, it was natural for Jarrell to marry those passions on the race track, flying the conservation organization Sea Shepherd’s Jolly Roger logo on his No. 18 Chevrolet Impala at a recent FASCAR Pro Late Models race at New Smyrna Speedway in his home state of Florida.

“My passion for the ocean really started in high school, “Jarrell said. “I was a little bit of a science major in high school, taking environmental science and marine biology.”

“I actually knew of Paul Watson, founder of Sea Shepherd Conservation Society, before I ever knew about the movement against whalers and marine poachers,” Jarrell continued. “So, I learned about his work at the Cove and his documentaries.”

“Later on I saw the TV show Whale Wars, the Animal Planet TV Series, so that interest continued,” Jarrell said. “I live right on the beach and this is something that is close to home to me.”

This young racer sees absolutely nothing strange about his ocean and race car marriage. In fact, he thinks the two actually go hand in hand.

“Race cars these days are very scientific and very technical,” Jarrell said. “The science side of racing is something I’ve always enjoyed.”

“So, having Sea Shepherd on the car was the perfect combination of my passion for racing with my interest in science, all combined into one.”

Jarrell also believes that racing and being out on the ocean, especially enjoying his ocean passion of surfing, engender similar feelings.

“Being on the ocean, it’s a calming feeling,” Jarrell said. “I have the feeling like I belong there.”

“When I’m behind the wheel of the race car, it’s like I’m at home and I belong there,” Jarrell continued. “I feel like it’s meant for me to be there and it comes very naturally to me.”

Jarrell has been racing for quite some time, in fact since 2005 where he started in quarter midgets. In 2007, he started racing stock cars and then trucks at New Smyrna, racing 27 times with one win.

“It was a big culture shock, coming from a quarter midget to a full-size stock car with 450 horse power,” Jarrell said. “I ended up second in points for my first season and was Rookie of the Year.”

“That was a really big deal for me and I really tried hard for that, especially competing against some of the bigger name and bigger budget teams.”

Jarrell continued racing trucks in 2009, however, was unable to run the full season because of sponsorship.  In spite of that, he ran sixteen select races and won seven of them.

“It was an amazing feeling showing up at race tracks and having great equipment,” Jarrell said. “But then we had to take the year off for 2010 because we didn’t have the sponsorship and I had a racing injury, a broken leg.”

“So, we decided to let my leg heal and focus on 2011,” Jarrell continued. “We were able to put sponsorship together and went racing in late models for the first time that year.”

“That was a different beast too but I was the happiest kid in the world being back in a race car,” Jarrell said. “I felt like I was back home.”

Jarrell was ‘home’ indeed, proving to many that he still had the ability to get behind the wheel of a race car and win. And this year, Jarrell has seen even more success.

“This year, I couldn’t ask for much more,” Jarrell said. “It’s been the best racing year I’ve ever had.”

“Even though I haven’t won yet, I’m racing in this new series, the Pro Late Model Series, against some of the best drivers I’ve ever seen,” Jarrell continued. “To be able to compete with them and even be mentioned in the same sentence as them, I’m so fortunate.”

“This last race, when I had the Sea Shepherd on board, I finished third, which was an amazing feeling,” Jarrell said. “It gave me a calming sense and I showed everyone I deserved to be out there driving a race car.”

“I was so happy that the race was able to go so well.”

Jarrell has big plans for next year’s season, which includes hopes for either a NASCAR K&N Pro Series ride or competing in the ARCA Series.

“Some new people have been approaching us this week because we are a low budget team and they have been impressed with what we have done in spite of that,” Jarrell said. “I’m proving to people that I can take a low budget car and finish up front with it.”

“I’m very happy,” Jarrell continued. “My only thing is to prove that I deserve to be out there.”

The youngster definitely fashions himself as a NASCAR up and comer, particularly dreaming of one day driving for one of the major teams.

“Growing up, my favorite race car drivers were the whole Hendrick Motorsports team, including Jeff Gordon and Jimmie Johnson,” Jarrell said. “Drivers I’d like to follow are Joey Logano and also the Dillons (Ty and Austin).”

“They are closer to my age and I’ve seen them race at short tracks,” Jarrell continued. “Just to have an opportunity to start in a NASCAR Truck or Nationwide race ultimately, that’s my goal.”

Until he achieves that goal, Jarrell is content to race hard and also do all he can to save the ocean, one lap at a time.

“My career has paralleled the ocean,” Jarrell said. “I feel like when you’re surfing and you have that momentum and you’re getting ready to stand up and ride the wave in.”

“That’s the point I feel that my career is at right now,” Jarrell continued. “I’m just catching the wave and all I need to do is stand up.”

SM Staff
Previous articleJohnson Dominates the Curtiss Shaver 400 at the Brickyard
Next articleEarnhardt Jr. takes point lead but will ‘have to wait until next year’ to win Indianapolis