Earnhardt Jr. takes point lead but will ‘have to wait until next year’ to win Indianapolis 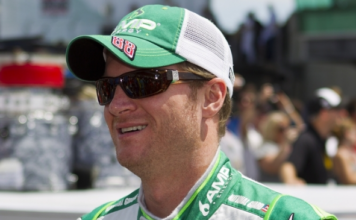 [/media-credit]Dale Earnhardt Jr. continues to accomplish firsts in the 2012 season. Sunday at the Indianapolis Motor Speedway he added another, becoming the point leader for the first time since September of 2004.

Finishing fourth in the Crown Royal presents the Curtiss Shaver 400 at the Brickyard – with Matt Kenseth being caught up in an accident and finishing 35th – the new man on top is the most popular one. The standings now reverse as Earnhardt Jr. holds a 14-point advantage.

Just a month ago he won a points paying race for the first time in four years. With six races before the Chase begins at Chicago, the No. 88 AMP Energy / National Guard team has both momentum and plenty confidence on their side as they look for their first championship. And they firmly believe they can accomplish that feat.

“We were really excited about our car the first run,” said Earnhardt Jr. afterwards. “Happy with how it was driving. Don’t know how fast the leaders were, but I thought the car had excellent speed and drive-ability. We messed with the balance a little bit throughout the race.

“It wasn’t perfect at the end. I think we got the best we could with the car, and the speed we had. I’m happy about that. My teammate got the win. We had a good run. I would like to win here but I’m going to have to wait until next year.”

Before the green flag flew crew chief Steve Letarte felt they could win the race if they played their strategy right. Strategy a recurring theme and race side note as many teams attempted to play the right hand. One that would get them to the front as Earnhardt Jr. needed to starting 20th.

But as they’ve done many times this year the team slowly worked their way towards the front. Knocking down the door to the top 10 and soon the top five, where he remained for the second half of the event. Indianapolis has never been a statistically great track for Earnhardt Jr. but he performs well at the speedway. Something he was plenty confident would happen again on Sunday.

Fourth would be as high as he would get, a career best finish at Indianapolis with teammate Jimmie Johnson dominating the event and appearing untouchable to the competition. Knowing he wasn’t going to gain much, Earnhardt Jr. told himself to stay smooth and bring the car home in once piece.

He was then one of the first to congratulate his teammate on his historic fourth win at the Brickyard.

As he congratulated Johnson many sent some his way as well. September 19, 2004 was the last time he held the point lead. A year that seemed to be shaping up to be Earnhardt Jr.’s He won six races, made the Chase and had his own destiny in his hands.

He let it slip through his fingers late in the Chase. First came a 25 point penalty after uttering a four-letter word in Talladega’s Victory Lane, then a wreck in Atlanta as he tried to take third place. He eventually finished fifth in the standings and hasn’t had a solid Chase since.

But those times are far-gone. Now Earnhardt Jr. leads the series in top 10s and has finished on the lead lap in the last 21 races, dating back to Homestead last November. He’s tied with another teammate, Jeff Gordon, for that record.

Something he holds to himself: having completed every one of the 5,648 laps in the 2012 season. It’s all enough to have Earnhardt Jr. thinking about what could be in terms of the championship, saying he wouldn’t mind having it come down to himself and Johnson.

Pocono next weekend comes first, the newly repaved triangle, which hosted a race earlier this season. As Earnhardt Jr. looks for more wins, something he and many others want, Pocono wouldn’t be a surprise. He led 36 laps on the way to an eighth place finish – a finished considered unacceptable but necessary as the team pitted for fuel instead of taking a gamble.

Those days may have pasted the team says. With a win in the bank, a Chase spot nearly locked up, it’s about maximum points. Speaking before Sunday’s race, Earnhardt Jr. said he was looking forward to heading back to Pocono, where he’s never won before. But his consistency might again lead to another first.

“I’m proud of that because it says a lot about our body of work,” Earnhardt Jr. said about the first 19 races of the season. “All season long we’ve been working hard and finishing well. That is symbolic of how well we’ve done. I’m proud of that.

“I have felt that way about our position in points all season long. We need to win more races. If we want to win the championship, we have to. I imagine we can win a couple races in the Chase. I don’t know if finishing fourth or fifth is going to do it. We’ll just have to see. We’d like to step it up just a little bit more.”