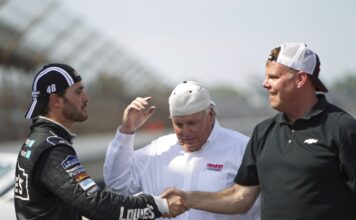 Jimmie Johnson had an extremely confident look on his face during pre-race before Sunday afternoon’s running of the Brickyard 400. He went even as far to tweet on Saturday ” I can’t wait for tomorrow, Our car is awesome”. Jimmie Johnson proved beyond all doubt on Sunday afternoon how awesome that car was.

On a sun splashed afternoon in Indianapolis, Johnson and the No.48 team showed why without doubt they are the favorite to win their 6th NSCS championship. Denny Hamlin set the pace early on leading the first 27 laps in which time Johnson went from 6th to 2nd and then took the lead after a pit stop. He only relinquished it during pit stops. Johnson led 99 of the 160 laps and beat 2nd place Kyle Busch by 4.7 seconds to secure his record tying 4th Brickyard win in a dominating fashion .

Johnson and the No.48 team are quietly putting together one of their best seasons in NASCAR since his rookie season in the series in 2002, posting 3 wins,10 top 5’s, and 15 top 10’s all which are series best. He also leads the series in laps led, with 912.

A look deeper inside the numbers tells why Johnson is the favorite heading into the chase. On non restrictor plate tracks in 2012, Jimmie’s numbers have been absolutely mind boggling. In 17 starts on the non plate tracks, he has 3 wins,10 top 5’s, and 15 top 10’s to go along with an average finish of 5.2 in those races which is the best in NSCS.

There are 6 races to go before the 12 driver cutoff for the Chase for the Sprint Cup and by all appearances the No.48 team is really starting to hit their stride. It wouldn’t surprise this guy if they put a couple of more wins on the board before the chase starts . It seems like they unload fast off the truck every weekend and they have the ultimate X factor in crew chief Chad Knaus calling the shots from the pit box. Today’s win should put the garage on notice that this is indeed the team to beat come chase time starting in Chicago in September.

The only thing standing in Jimmie’s way of a 6th cup series title is an October visit to Talladega. Where the plate tracks have been unkind to the No.48 team this season, but if they can navigate the treacherous close quarter racing at Talladega and come out of there with a top 10 and judging by the numbers this season on the rest of the chase tracks. NASCAR could have a very familiar face holding the trophy at the end of 400 miles at Homestead in November and that face is Jimmie Johnson. Right now I wouldn’t bet against him.