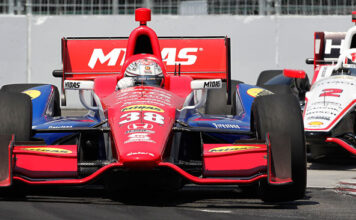 [/media-credit]Graham Rahal will be returning home this weekend to compete in the Honda Indy 200 at the Mid-Ohio Sports Car Course.  On August 5th the IZOD IndyCar Series will take to the track in Mid-Ohio for the sixth time, with 2007 being the first year IndyCar sanctioned a race at the venue.  The Columbus, Ohio born racer will be looking to have success on a track that has been a place of bad luck for him in the past.  In his four visits to the track, Rahal has landed only one top-ten finish (8th in 2009).

Rahal however is coming off a 4th place finish at Edmonton, a result that is tied for his second best finish of the season to date.  The #38 Service Central Honda driver is looking to use that momentum from two weekends ago to translate into a great performance at his home track.

“It feels good anytime you can build momentum at any point in the season. Particularly for us at this point, of course going to Mid-Ohio, which is my home race, a place that’s always kind of stumped me.  I’ve never really had a great result there,” Rahal says when speaking to IndyCar.com.

The Rahal family knows what success feels like at Mid-Ohio with Graham’s father, Bobby, winning the event in 1985 and 1986.  Graham looks to mimic part of his father’s career and win at the road course in Lexington.

“I love the racetrack.  There’s a lot of history there in Indy car racing. Certainly with the Rahal family.”

Like any other sporting event, a driver always wants to win on his home turf.  Take Aryton Senna’s glorious victory in his home country of Brazil in 1991.  The tremendous roars from the crowd that day can only be derived from the hometown hero coming away the victor.  Or Lewis Hamilton’s 2008 British Grand Prix victory in the wet where he finished a whopping 68 seconds ahead of second place.  “It is definitely and by far the best victory I’ve ever had,” stated Hamilton in regards to winning his home race.

Looking to the weekend, there can be more comfort found for Rahal than just the enthusiasm and luxury of being at home.  Of the five IZOD IndyCar races at Mid-Ohio, Rahal’s owner, Chip Ganassi, has won four of them.  He has a three-time Honda Indy 200 at Mid-Ohio winning teammate in Scott Dixon and he has recently tested at his home track on July 26th.

Graham Rahal has got momentum, experience, and a team capable of producing a successful result in Mid-Ohio.  At a track he loves and a venue he would embrace winning at, maybe this weekend Graham will etch his own history at a place already rich with the Rahal name.

SM Staff
Previous articleFord MIS Tire Test Quotes (Greg Biffle)
Next articleThe Last Word – Ten are in, 16 still with a shot as they head to Pocono