The Last Word – Ten are in, 16 still with a shot as they head to Pocono 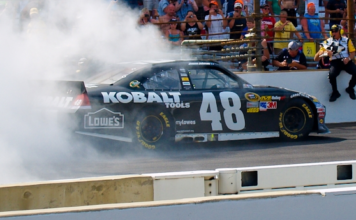 [/media-credit]Jeff Gordon has four Cup championships, but Jimmie Johnson now has five. Jeff won the Brickyard 400 four times, and now so has Jimmie. You could think of this as Jimmie having taken over from Jeff as Rick Hendrick’s premier driver. Instead, I see this as two guys who have brought the team nine Cup titles and now eight wins at Indianapolis.

Johnson dominated much of the event, Gordon was fifth, with Dale Earnhardt Jr slipping between them in fourth to take over the lead in points on the season. Another great day for the team, though not as great for Gordon as he would have liked. While Jimmie and Junior are pretty much locked into the Chase, and two wins by Kasey Kahne having him holding down yet another Chase place for the moment, Gordon remains outside looking in. With not enough points to slide in via the top ten, he needs wins, with just six races left to get them before the cut off.

Carl Edwards remains so close, yet so far from contention. 12th in the standings, his lack of wins may very well leave him behind. Problems early left him just a participant on Sunday, coming home 29th. Kyle Busch sits six points and one win ahead of him on the ladder. The points he can get, but that win remains elusive.

Matt Kenseth got taken out by Joey Logano at Indy, but in the overall scheme of things it was meaningless. Kenseth is in, Logano is out unless he discovers another victory. Ryan Newman needs another win, while Gordon probably needs two; two wins in the next six events. Possible, though maybe not probable.

ABC’s race crew is a good one as that network resumed its Cup coverage. I mean, Allan Bestwick, Dale Jarrett, and Andy Petree do a credible job. The pit reporters provide good coverage. The analysts? Well, I’m going to see how long I can go before I mention again what I really think about those boys and girl. It might be tough, but as long as my PVR can skip me past them I just might be alright. Wish me luck.

Next up is the Pennsylvania 400 at Pocono. Jeff Gordon won there in 1996, 1997, 1998, 2007, and 2011. Newman won in 2003. Edwards in 2005 and 2008. Logano back in June. Kyle never has. Winning is now everything. The real standings, the one that really matters, has Johnson, Tony Stewart, and Brad Keselowski with nine Chase bonus points, Denny Hamlin has six, with Earnhardt, Kenseth, Greg Biffle and Clint Bowyer each with three. Kevin Harvick and Martin Truex Jr both have none, and each victory until Richmond worth three points going into the Chase. That is what a win would mean to them.

While it might be fun to see which of those boys could add to their win totals, Kyle Busch could use a second victory to put a near lock on an invite, but both Newman and Logano needs number two to get back into the mix and force two-time winner Kasey Kahne to work to stay in. Carl Edwards needs a win, and to jump six positions ahead of Busch at Pocono to take over a wild card position, and Jeff Gordon needs to win there, his first, just to move from pretender to contender. Only one thing will matter at Pocono on August 5th…who won?  By my calculations, ten drivers are pretty much locked in, another 16 still have a shot. I mean, how hard could it be to win six straight? Enjoy the week.

Ron Thornton
A former radio and television broadcaster, newspaper columnist, Little League baseball coach, Ron Thornton has been following NASCAR on this site since 2004. While his focus may have changed over recent years, he continues to make periodic appearances only when he has something to say. That makes him a rather unique journalist.
Previous article
Rahal returns home, looks to continue family success at Mid-Ohio
Next article
TRACK POSITION COULD LEAD TO CHASE POSITION FOR GORDON