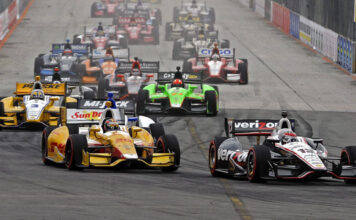 [/media-credit]After the IZOD IndyCar race in Mid-ohio on August 5th, the series will have but only three races left.  Auto Club Speedway will host the finale this year in mid September, ending the season months before both NASCAR and Formula 1.  With the season coming to a close more rapidly than expected, top drivers are entering the climatic stages of the season where every point earned will be crucial to who wins the 2012 IndyCar Championship.

Realistically there are four drivers in the hunt for the championship this season (note that IndyCar awards points even for finishing last in a race).  Ryan Hunter-Reay has earned 362 points thus far, leading the standings by 23 points over Helio Castroneves.  Will Power is close behind his Penske Racing teammate, 26 points out of the lead.  Lastly, Scott Dixon is currently fourth in the championship with 301 points, 61 points out of first.  With our focus on these four drivers and the four remaining tracks on the schedule, an interesting title fight is in the works.

August 3rd – 5th the IICS is at the Mid-Ohio course in Lexington, Ohio.  Looking at the statistics from all five races IndyCar has held at Mid-Ohio since the 2007 season, Hunter-Reay, Power, and Castroneves have average finishes at the sports car course of 6.8, 6.6, and 7.8 respectively.  Scott Dixon possesses a statistical advantage at Mid-Ohio by accumulating an average finish of 2.2 throughout the five races he’s contested there.  Theoretically, if all four drivers continue to finish close to their average finishes this weekend, Dixon will make up considerable ground on his competitors, therefore squeezing the top four drivers in the standings closer together.

After a three week break, the IICS will be back in action at the Sonoma Raceway for the GoPro Indy Grand Prix of Sonoma.  As with most road courses, Will Power has excelled at Sonoma the last two years, winning the 2010 and 2011 races.  Ryan Hunter-Reay however, has had different fortunes in wine country, earning an average finish of 14.6 in five starts. Castroneves and Dixon both have one win a piece in Sonoma.  RHR, the current points leader, has had the least amount of success at Sonoma among the top four drivers in contention for IndyCar’s crown this year. Thus Sonoma will see an extended effort by him to either go for a win while he’s got the momentum in hand from a great season so far or be on the defensive all weekend, trying to leave with minimum damage in the points race.

The climatic point of the season could come with two races remaining, at the Grand Prix of Baltimore.  The streets of Baltimore serve as a wildcard for the championship, IndyCar has raced there only once, the circuit is also undergoing three changes to its layout in an attempt to promote more exciting racing around Camden Yards.  With limited data and experience at the venue, the playing field for the weekend will be leveled slightly.  Qualifying will be as important as ever, with the wrong set up, any of our drivers could find themselves starting in the back of the pack on a tight street course that may be difficult to overtake on.  Look for Baltimore to produce some plot twists in the quest for the 2012 title, Josef Newgarden of Sarah Fisher Hartman Racing visited the venue recently and discussed his thoughts on the inaugural Baltimore event last year.

“Baltimore was the most physical event last year. It’s really bumpy on half the circuit and really smooth on the other, which made it really difficult to drive the car.”  Newgarden also stated how the changes to the circuit layout will “make for good competition” in this year’s event.

With Baltimore being one of the most difficult circuits on the calendar to drive as well as additional changes being placed on the track for more passing opportunities to arise, look for any of the title contenders to either create momentum and thrust themselves to the top of the standings, or make a mistake under the rough conditions, eliminating them from championship contention.

Auto Club Speedway in Fontana, California will play host to the IZOD IndyCar World Championships on September  15th.  The IICS hasn’t held a race at the venue since 2005 and of all the drivers currently in the IndyCar Series, only Dario Franchitti has gone to victory lane in Fontana.   Racing on the 2.0 mile oval for the first time in seven years with the brand new DW12 chassis will present many unknown variables to the teams, setting the series up for a climatic final round of the season.

IndyCar has had success ending the season on ovals in the past.  In 2007, Scott Dixon ran out of fuel on the last lap of the Chicagoland event, while his future teammate Dario Franchitti cruised by to take the win, and the 2007 championship. [/media-credit]In 2009, the series shifted the finale to Homestead-Miami Speedway.  Dixon, Franchitti, and Ryan Briscoe emerged as title favorites heading into the last race, with the three of them being separated by just 8 points.  Dixon and Briscoe were dominating the field, lapping everyone but third position, Franchitti.  Franchitti who himself was under threat to go a lap down, won in dramatic fashion due to Dixon and Briscoe being forced to pit with only a few laps to go.

Two road courses, a street course, and an oval present a diverse set of venues to decide who will ultimately be IndyCar’s 2012 Champion.  Amongst the four drivers mentioned, all have seen varying results at Mid-Ohio and Sonoma in the past.  With the possibility of those events bringing the contenders closer together in points, the unknowns that are present in Baltimore and Fontana will surely make for a great championship fight for the history books.