NOTES FROM THE NASCAR NATION: DODGE IS STILL A UNIQUE ELEMENT TO SILLY SEASON 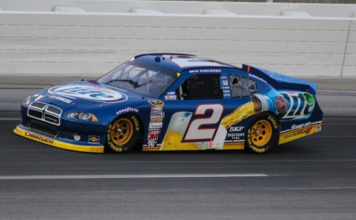 [/media-credit]NASCAR’s 2012 silly season is in full swing. It’s that time of the racing season where we all try to sort out garage rumors regarding what driver is moving to what team backed by what sponsor. We have some very good candidates for this year’s silly season. Names like Matt Kenseth, Joey Logano, Kurt Busch and Ryan Newman are in the rumor mill forefront. So is that unclaimed seat located inside of that #22 Shell-Pennzoil Dodge belonging to Penske Racing.

Speaking of Dodge. They have added a highly unique element to silly season 2012. It’s very rare that a car manufacturer impacts the garage rumors they way MOPAR has this year. The best way to understand how this happened, and which direction it may or may not be heading in, would be to visit the “Timeline.”

FEBRUARY 20TH. Dodge announces it will continue racing their Charger in NASCAR Sprint Cup competition in 2013. Dodge officials said their 2013 Charger race car was two years in the making and it design was completed with a close association with NASCAR officials. They also said no other car was considered but the Charger because “it fit like a glove.”

MARCH 1ST. After a ten year association Dodge, Roger Penske Racing surprised everyone by announcing its plans to race Fords beginning in 2013. It was the renewal of an old successful association. Penske successfully raced Ford from 1994 to 2002.

MARCH 2ND. Andrew Murstein, the majority owner of Richard Petty Motorsports, said that his organization has already been contacted by Dodge Motorsports, as well as the other manufacturers, about their status. RPM is currently in the final year of their contract with Ford Motorsports and Murstein’s comments ignited rumors that said Dodge and Richard Petty, an extremely historical NASCAR pairing, may be looking at a family reunion. Murstein also noted that offers of manufacturer support of race teams appears to be rather strong and felt it was an indication that America’s automakers are doing rather well these days.

MARCH 11TH. Dodge officially unveils its 2013 Charger race car at the Las Vegas Motor Speedway. The car immediately receives critical acclaim for its sleek design. Dodge officials acknowledged that Roger Penske racing assisted in the development of the new racing Charger but it was also duly noted that no one from Penske was present for the car’s unveiling. Despite the critical acclaim for this beautiful race car from the NASCAR media, the questions remained: who’s going to drive it and who’s going to build the engines for it?

MARCH 12TH. During the course of an interview with ESPN, Ralph Giles, President and CEO of Dodge’s Street and Racing Technology Division, said Dodge is moving forward and hopes to remain in NASCAR despite the loss of Penske Racing. He also indicated that he’s already receiving a lot of inquiries from NASCAR teams joining Dodge Motorsports and added “we’re actually investing in NASCAR more than ever.”

MARCH 25TH. Roger Penske has a big decision to make regarding the engines for his new Ford race cars. He can lease them from Roush Yates Engines, who supplies power plants to all of the Ford teams in the Cup series, or he can build them in his privately owned engine shop that manufactures the Dodge motors for his current race cars. Penske says his engine shop will remain open is some capacity and, if he opts to go to another engine source, such as Roush Yates, his engine shop could be made available for Dodge.

APRIL 21ST. The silly season rumor mill starts reporting that Richard Petty Motorsports is conducting negotiations with Ford to renew their manufacturer’s contract. However that same rumor mill also insists that RPM hasn’t ruled out a return to Dodge and a renewal of the iconic Petty-Dodge relationship. Dodge makes it clear that they’ve looking for an anchor team and they would love to see Richard Petty Motorsports in that role.

MAY 31ST. With the time clock clicking away, Dodge still has no confirmed plans or teams in place. It’s at this point that the name Michael Andretti hits the silly season roster. The IZOD Indy Racing League owner says he seriously considering forming a NASCAR Sprint Cup team and has been talking to Dodge. While some interest in this rumor generated, it wasn’t taken that seriously. This same speculation surfaced during the 2011 season with no real substance to it.

Meanwhile Dodge continues to talk to teams who still do not have manufacturer agreements in place for 2013. That list of contacts includes Richard Petty Motorsports, Furniture Row Racing and Front Row Racing. Jerry Freeze, General Manager of Front Row, admits there has been some informal talks with Dodge but nothing of any real substance has come from them.

JUNE 12TH. The silly season rumor mill gets smoking hot and claims that Richard Petty Motorsports will hold a press conference to announce their return to Dodge during the NASCAR weekend at Michigan. RPM makes quick work of informing everyone that they have no press conferences scheduled on any subject. Dodge officials deny that a deal with RPM is in place while King Richard Petty simply says he knows nothing about it and can’t seem to find anyone that does.

JUNE 23D. Dodge team owner and driver Robby Gordon announces that the road course event at Sonoma Raceway will be his last appearance of the year in the NASCAR Sprint Cup Series. Gordon will instead spend the remainder of the year concentrating on his organization’s off road and rally racing efforts which is actually doing very well. He will also be spending time developing his new stadium off road racing series which many observers say is already showing a great deal of promise. Gordon also claims that, in this day and age, it’s impossible to run a 36 race NASCAR Cup schedule without the contractual support of a auto manufacturer. He also states that, at this point in time, Dodge’s NASCAR plans still appears to be vague at best while Ford, Chevrolet and Toyota does not seem interested in expanding their team rosters.

JUNE 7TH. The rumor mill now states that Dodge is going to purchase the Roger Penske Dodge operation and inventory with plans to build their own engines in a manner similar to the way the Los Angeles based Toyota Racing Development builds engines for their teams.

JUNE 27TH. Michael Andretti admits that he looked at forming a NASCAR team last year but the plans fell apart. He says that, if a full time sponsor can be found, he will seriously look at teaming with Dodge to enter NASCAR Cup racing in 2013. The rumor mill states that Andretti plans to house his NASCAR Dodge operation in a Statesville-North Carolina facility formerly occupied Ray Evernham Motorsports.

JUNE 28TH. In a whirlwind of silly season activity, comes a rumor that says Michael Andretti has purchased Roger Penske’s engine shop and will definitely field at least one full time Dodge car in the NASCAR Sprint Cup Series next year and beyond.

That same whirlwind immediately attaches the name of NASCAR free agent Matt Kenseth to the rumor claiming he will be Andretti’s new driver. Kenseth, who is currently winding up his final season with Roush Fenway Racing, apparently made a comment, regarding future plans, that said “I plan to drive for a new Cup team in 2013,” and that somehow got him attached to Michael Andretti and Dodge.

In a very busy day for the silly season came yet another rumor that said Richard Petty Motorsports is very close to signing, and announcing, a manufacturer’s deal with Dodge.

JUNE 29TH. Beth Paretta, Director of Marketing and Operations for the Chrysler Corporation’s Street and Racing Technology Brand, removes some of the wind from the whirlwind of rumors saying Dodge still continues to evaluate possible plans for NASCAR in 2013 and beyond. Paretta further states: “we have no commitments with any partners at this time.”

JUNE 30TH. Tim Cindric, President of Penske Racing, adamantly denies that his company’s engine facility has been sold to anyone.

JULY 17TH. The silly season next links up the names Kurt Busch and Michael Andretti. According to the rumor mill Busch, currently finishing a one year deal with Phoenix Racing, will be the driver of the Andretti Autosport Dodge next year.

JULY 21ST. Michael Andretti unplugs some of the rumors by saying that time is running out for him to join NASCAR in 2013 and it’s highly unlikely that he will be involved with a Sprint Cup operation next year. Andretti also claims that there were some sponsorship deals in the works but it’s getting to a point of becoming too late and adds “it’s not dead yet, but it’s highly unlikely.”

AUGUST 2ND. Despite the fact that their Charger race car has been approved by NASCAR, Dodge officials say they will not be participating in the upcoming Goodyear Tire test, for 2013 models, scheduled for August 7th and 8th at the Martinsville Speedway. Chrysler Corporation executive Beth Paretta cited a lack of proper preparation time as being the reason for Dodge not participating in the Martinsville test. However it does appear that Dodge is seriously looking at similiar Goodyear tests scheduled for October at the Talladega Super Speedway, the Texas Motor Speedway and the Kansas Speedway.

AUGUST 4TH. In a rather surprising comment, NASCAR team owner Jack Roush claims that the indications are saying that Penske Racing will use Roush Yates Engines in their Fords for the 2013 season although he’s not exactly certain if officials papers have been signed yet. There was no comment from the Penske camp on this speculation.

However, the Roush statement did, once again, fan the flames of the rumor that said Roger Penske is again considering selling his engine facility to Dodge Racing.

This rumor coincides with speculation that says Furniture Row is seriously looking at switching from Chevrolet to Dodge in 2013. Furniture Row Racing General Manager Joe Garone has confirmed talks with Dodge. They hope to field two Dodge teams next year. While current driver Regan Smith is up for contract renewal this year, Furniture Row has made it clear they want to keep him. There are also reports that says the organization would like to place Kurt Busch in a second team Dodge if sponsorship could be found.

So, have we learned anything by visiting the silly season Timeline? Actually no we haven’t, at least nothing that is etched in stone. There are, however, reports that says Dodge will make a formal announcement regarding their NASCAR plans possibly on, or close to, September 1st. In the meantime they remain as a very unique aspect to this year’s silly season.

Remember, nothing is official until Dodge Racing representatives, team owners and race drivers all start hosting official press conferences to announce their plans. Anything else is just more rumors which is why they call it silly season.

SM Staff
Previous articleMICHAEL BUFFER LENDS VOICE TO DRIVER INTRODUCTIONS PRIOR TO IRWIN TOOLS NIGHT RACE — $10,000 To Charity On Line As Fans Will Vote For Best Intro
Next articleDecision at Pocono Puzzling