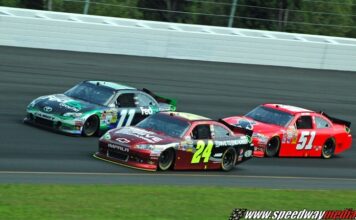 [/media-credit]The terrible events that followed the rain shortened race at Pocono were puzzling to me on Sunday. I’ve been to many sporting events over the years, and once severe weather is in the area of the stadium, evacuation is always the first step. Two years ago at West Virginia’s Puskar Stadium, the stands were cleared as the severe weather approached. Only when the weather had moved out of the area, were fans allowed back into the stadium. When a second string of storms approached, the stands were evacuated and the game called. The same thing has been true of most events that I have attended when the same situation has arisen.

The consequences of such action are not good. In late June, a severe storm ripped through my area just prior to the PGA’s Greenbrier Classic golf tournament. On the morning of June 30th, The Old White course at the Greenbrier resort looked like a war zone. Hundreds of thousands were without power, but the Greenbrier’s owner got totally ripped for having the golf tournament when many had no electric power for two weeks. The two athletic directors got the same treatment when the football game was called, but it was the right thing to do. No one died in either incident, and those clearing the golf course did their work after the storm, and that is the point. When the severe storm warning was issued shortly after 4:00, the stands at Pocono Raceway should have been cleared so as to give people time to get to their cars or campers and to safety. It didn’t happen and at least one person lost their life.

It’s tough for those in charge to make calls of this nature. You have fans paying big bucks for tickets to see the events and they want the show to go on. It is especially tough for a NASCAR event. Even though revenues were reduced for the football game and the golf tournament, track owners and the sanctioning body itself lose a lot more. That said, the safety of those attending should come first. Unlike the numerous stick and ball examples where fans are evacuated, those in charge at NASCAR and Pocono Raceway decided to wait until they had “lost the track.” Weather professionals in the area said that NASCAR knew the severity of the storm well in advance. Why didn’t they act when they received the information?

Ron Fleshmanhttp://www.ris-news.com
Ron Fleshman has followed NASCAR racing since attending his first race at Martinsville Speedway in 1964. He joined the Motor Sports Forum on the CompuServe network in the 1980s and became a reporter for Racing Information Systems in 1994. In 2002, he was named NASCAR Editor for RIS when it appeared on the World Wide Web as www.motorsportsforum.com. He can now be found at www.ris-news.com. Ron is a member of the American Auto Racing Writers and Broadcasters Association. You can find Ron following and reporting on the top three NASCAR divisions each week. As a lifer in his support of racing, he attends and reports on nearly 30 events a year and as a member of the motor sports media, his passion has been racing for 47 years. He lives with his family in rural West Virginia and works in the insurance industry when not on the road to another track.
Previous article
NOTES FROM THE NASCAR NATION: DODGE IS STILL A UNIQUE ELEMENT TO SILLY SEASON
Next article
The Final Word – Watkins Glen is next, with Gordon back in the mix