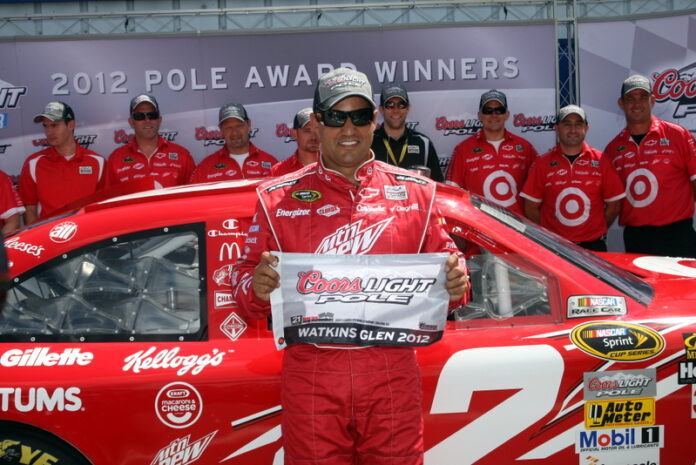 [/media-credit]Following a day of rain yesterday here at Watkins Glen International, the drivers of the NASCAR Sprint Cup Series (NSCS) were given the opportunity to test their equipment early this morning in a 1.5 hour final practice session. With the sun still hidden behind the clouds and a cool breeze aiding the cause, the speeds were at a blistering pace around the 2.45-mile course this morning.

During NSCS qualifying, it was a new track record for Juan Montoya at a speed of 127.020 mph that claimed his second Coors Light Pole award for the 27th Annual Finger Lakes 355 at The Glen. This is his ninth career pole award in 203 NSCS races and his second pole in as many weeks. Though he does have a win here at the 2.45-mile short course configuration, he has never started from the point position here in six attempts.

Happy Hour winner Kyle Busch, who will start the race on the outside of Montoya, just five-hundredths of a second behind the pole-sitter.

“A really solid lap for the Miller Lite Dodge team. We haven’t qualified well this year but today was a great effort. Track position is key on road courses especially at a fast place like The Glen. I’m a little disappointed that we didn’t get the pole.” Kesolowski said.

“I made a mistake in turn six and just didn’t quite have enough rear grip there. That’s OK.  We’ve got a great race car and we’ll just play the strategy game and see what comes out of it.” Ambrose said.

Green flag is slated for just after 1PM tomorrow, and with the grid set the way it is, the 27th Annual Finger Lakes 355 at The Glen is shaping up to have a short-track swagger about it.