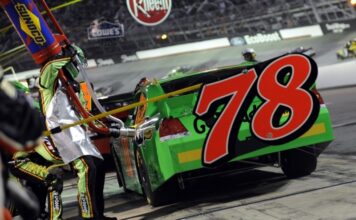 [/media-credit]With their intro songs, as well as the voices of their children singing the national anthem ringing in the drivers’ ears, here is what was surprising and not surprising from 52nd Annual Irwin Tools Night Race at the new, old Bristol.

Surprising:  This driver not only proved he can dance the ‘Dougie’ but he can also win the night race at Bristol, scoring one of the biggest wins of his career.

Denny Hamlin, driving the No. 11 FedEx Ground Toyota for Joe Gibbs Racing, scored his third victory of the season, but more importantly his 20th career Cup victory and the 200th win for the No. 11 car.

“You dream about winning at this place and I’ve come so close and never won,” Hamlin said. “This is just a big win.”

“I’m just a spec on that stat sheet of wins for this number,” Hamlin continued. “This is a number that has been big in NASCAR history.”

Not Surprising:  Ever the showman, it was not surprising that track owner Bruton Smith delivered exactly what he wanted for the fans of Bristol Motor Speedway, pronouncing that the ‘old’ Bristol, complete with beating and banging, was back at the newly changed track.

“I will be the first to admit that I was somewhat hesitant going into the race at Bristol after the changes that were made to the track,” Larry McReynolds, former crew chief and NASCAR analyst, said. “Now, after what I saw last weekend, I believe we have reached a balance that everyone can be happy with.”

“We still have some of what I call the new Bristol, which is side-by-side racing, while at the same time, we sure did have a lot of the old Bristol again,” McReynolds continued. “Saturday night brought us 13 cautions, which is the most at Bristol since March 2007.”

“What’s interesting about that, March 2007 was the last race before they re-did the surface the last time.”

Surprising:  While Tony Stewart, driving the No. 14 Mobil 1/Office Depot Chevrolet, had a miserable night on the track, tangling with competitor Matt Kenseth while racing for the lead and wrecking to finish 27th, he received surprisingly high marks from one of his other competitors on his helmet toss at the No. 17 Valvoline NextGen Ford.

“I saw him lingering, kind of waiting with his gear,” Jimmie Johnson, driver of the No. 48 Lowe’s Dover White Chevrolet, said. “I figured something was going to happen.”

“I heard he had a good toss on it,” Johnson continued. “I know he impressed our crew. They said he had an arm on him; he hit a good throw and hit it dead center.”

Not Surprising:  Apparently one other quasi-member of the Stewart Haas racing team, rookie Danica Patrick learned her lessons well from team collaborator and mentor Tony Stewart.

While the driver of the No. 10 GoDaddy.com Chevrolet for Tommy Baldwin Racing did not throw her helmet after a late race altercation with Regan Smith cost her a top-20 finish in her first Bristol Cup race, she did her fair share of finger wagging at her nemesis as he came around the track.

“We’re all racing hard,” Patrick said. “This is Bristol and that is why people love this track is because you see a lot of that and you see tempers flare.”

“It was just a bummer because I really felt like the GoDaddy Chevrolet was going to get a solid, maybe a top-20 , finish and on the lead lap.”

“So, it’s a shame we lost that,” Patrick continued. “But you know,Bristol is a place where you find out who’s playing fair and who’s not.”

Surprising:  The ‘Sheriff’ showed his badge at Bristol, as well as how hungry he was to be back behind the wheel of a competitive race car. Brian Vickers, driving the No. 55 MyClassicGarage.com Toyota for Michael Waltrip Racing, finished fourth in a race which he also had the privilege of leading.

“I gave it all I could,” Vickers said “But it wasn’t enough.”

“I’d loved to have won this thing and we had a shot at it.”

Not Surprising:   Casey Mears, behind the often start-and-park wheel of the No. 13 Ford Fusion for Germain Racing, scored his first pole in many, many years, thanks to a surprise rain washing out the qualifying session.

Yet, even with the great starting spot, it was not surprising that Mears faded throughout the race, finishing 21st.

“It’s been a couple of years,” Mears said of his pole position. “The team has really grown in strides and we’ve made a lot of big improvements this year.”

Surprising:  While Joey Logano, driver of the No. 20 Dollar General Toyota, faces an uncertain future as well as a battle for a Chase spot, it was still surprising just how frustrated the young driver was even with an 8th place finish at Bristol.

“This was the most frustrating race I think I’ve ever been a part of,” Logano said. “I had a good care in the beginning of the race and the track changed and we just couldn’t keep up with it.”

“We need a win and anything short of that is not good enough.”

Not Surprising:  ‘Mr. Consistent’, otherwise known as Dale Earnhardt Jr., clinched his spot in the championship hunt with a twelfth place finish at Bristol. He was joined by fellow clinchers teammate Jimmie Johnson and Greg Biffle, the current points leader.

“I feel good about it,” Junior said of his clinch. “We worked real hard all season and I want to thank my guys.”

“I made a little mistake and came down a closed pit,” Earnhardt, Jr. continued. “But we had a fast car.”

Surprising:  Kyle Busch, who has had quite a prior record at Carl Bristol with four wins, five top-five finishes and seven top-10s in the last ten Cup races there, surprisingly struggled at this new/old Bristol.

“Our night was decent,” Busch said. “I think I screwed us up in practice – just not getting the right setup underneath the car.”

“I took our guys in a little bit of the wrong direction so I hate it for them,” Busch continued. “We fought hard and did all we could.”

While Busch did not get a needed win, he did keep his hopes alive in the ‘wild card’ race for the Chase. He sits now in the 13th spot, second in the wild card standings thanks to Carl Edwards’ gas gamble and 22nd place finish at Bristol.

Not Surprising:  Perhaps it was the Farmville-themed race car, but Jeff Gordon, veteran and four-time champ was have a great deal of fun racing at a track that has been very good to him in the past.

And with his third place finish, the driver of the No. 24 Farmville/Drive to End Hunger Chevrolet, moved up two spots in the standings to the 14th position.

“What I loved about the racing, even though it was really tough to pass, is it just reminded me of old school Bristol,” Gordon said. “You did slide jobs on guys when you got runs and that’s what we had tonight.”

“So, I think it was a success and I certainly had a lot of fun.”

Surprising:  Whether a road course, oval or short track, Marcos Ambrose continued his reign of good finishes with another top-5 finish. The good run at Bristol moved the driver of the No. 9 DeWalt Ford up one position to 16th in the point standings.

“It’s been a great month,” Ambrose continued. “I’m just really proud to represent the King, have a strong run and give them a shot to make the Chase.”

Not Surprising:  After being hit with a hefty penalty for irregularities with the frame rails of the No. 27 Menards/Schrock Chevrolet, Paul Menard, crew chief Slugger Labbe and the team battled back for a 10th place finish on the short track.

“This entire team overcame a lot for this top-10 finish,” Menard said. “The pit crew was amazing tonight too.”

“Once we were able to move into the high groove, the car was pretty good.”

Because of the penalty, Menard and his team are now in the 17th position in the point standings. Team owner Richard Childress is appealing the severity of the penalty.