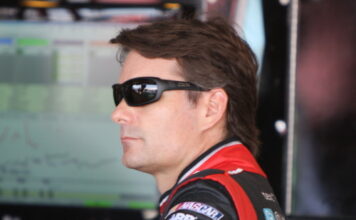 [/media-credit]In a race full of twists and turns, including rain delays and wild card drama, here is what else was surprising and not surprising from the 55th annual running of the Federated Auto Parts 400 at Richmond.

Surprising:  It was surprising what a dramatically different reaction this driver had to a second place run this weekend as compared to the last.

Jeff Gordon, piloting the No. 24 Drive to End Hunger Chevrolet, went from kicking himself for his second place finish behind Denny Hamlin at Atlanta to being thrilled with his Richmond runner up run, especially since it clinched his wild card spot in the championship Chase.

Gordon, Alan Gustafson (crew chief), Eddie D’Hondt (spotter) and the entire 24 team demonstrated the ‘never give up’ mantra, taking a car that was admittedly ‘junk’ at the beginning of the race, cutting the chain on the rear sway bar on a pit stop, and getting the car back up through the field after the rain delays to finish in the second spot and secure the final wild card berth in the Chase.

“I still can’t believe we actually did it.”

Not Surprising:  As elated as Jeff Gordon was, the driver who fell out of the Chase was equally deflated, if not more so. Errors on pit road, including a lug nut problem that created a lengthy pit stop, cost Kyle Busch, driver of the No. 18 M&M’s Toyota, the chance to compete for the Cup this year.

Busch, who finished the race in the 16th position, fell back to the 13th spot in the point standings, losing his wild card berth to Gordon.

“We missed it,” Busch said simply, after gathering his composure enough to make a brief statement. “That’s it, plain and simple.”

“There’s no right way to handle this situation.”

Surprising:  While many were surprised that all four of the Hendrick Motorsports cars scored spots in the Chase, the bigger surprise was that Michael Waltrip Racing achieved a similar feat, getting both of their race cars into Cup contention.

In fact, one of their drivers, Clint Bowyer, in the No. 15 5-Hour EnergyToyota, powered through an incident with Juan Pablo Montoya and almost running out of gas, to make his way right toVictory Lane.

“”To win this last race before this Chase is unbelievable,” Bowyer said. “We had a lot of adversity we had to bounce through.”

“This is a good way to get things bounced back headed into this Chase,” Bowyer continued. “You never give up in this sport.”

“Man, I feel good,” the driver of the No. 56 NAPA Auto Parts MWR Toyota said. “The way our cars are running and as fast as we’ve been the last six or seven weeks, we’re dangerous.”

“Looking forward to going out and having some fun and hopefully we’ll be in the hunt.”

Not Surprising:  Although thrilled that the team that bears his name raced two cars into the championship hunt, co-owner Michael Waltrip had another driver and good friend on his mind as he reflected on just how far his team had come over the years.

“I’m so proud of what we’ve put together,” Waltrip said. “I’m obviously really happy with having two cars in the Chase.”

“But my inspiration for having a team from the beginning was Dale Earnhardt,” Waltrip continued. “I always wanted to have a team like Dale had.”

“So anytime something goes good, I always think about what all he meant to me.”

Surprising:  Denny Hamlin, driver of the No. 11 FedEx Express Toyota had a surprising new attitude about not only his race, in which he led 202 laps but finished 18th, but also his bid for the championship.

“For the most part, I think I’ll just be a lot more relaxed this time around,” Hamlin said. “What do we have to lose?”

“We’ve never won a championship,” Hamlin continued. “We’re going out there to try to win our first.”

“I’m going to race week-to-week and just not think about a championship until I get to Homestead.”

Not Surprising:   While Richmond was good to Stewart Haas Racing, it was not quite good enough to get one of their teams into the Chase.

Tony Stewart, piloting the No. 14 Office Depot/Mobil 1 Chevrolet, finished 4th at Richmond and became the 3rd seed in the Chase standings.

“Really proud of Steve Addington (crew chief) and all of our guys at Stewart-Haas Racing,” Smoke said. “Just proud of the effort tonight.”

Teammate Ryan Newman, however, did not fare so well. Although he brought his No. 39 Quicken Loans Chevrolet home in the 8th position, he missed out on a spot in the Chase.

“It’s disappointing,” Newman said. “I don’t really know what to say other than that.”

“We gave it all we had and we didn’t get the win we needed to make the Chase.”

Surprising:  One driver who has been admittedly struggling all year had a surprisingly good Richmond run. Jeff Burton, driving the No. 31 Caterpillar Chevrolet, finished top-10, in the sixth position to be exact.

“I’ve been saying week after week how strong this team is getting and we proved that tonight with a hard-fought top-10 finish,”Burton said. “I am happy and proud of everyone.”

Not Surprising:  Although Kasey Kahne focused mightily on his No. 5 race car all night and into the morning, he was, not surprisingly, focused on another number, four, after the race.

Kahne finished 12th at Richmond, but more importantly secured the 11th seed in the Chase, making him one of those four Hendrick Motorsports drivers in the hunt for the championship.

The two Fords out, however, were Carl Edwards in the No. 99 Kellogg’s Ford and Marcos Ambrose in the No. 8 MAC Tools Ford. Edwards finished the Richmond race in the 17th position and Ambrose finished top-15.

“I’m obviously disappointed,” Edwards said. “We just let too many points get away for a bunch of different reasons.”

“We will just go try to build the best team we can for next year and try to make sure a Ford wins this championship.”

“I just tried my hardest,” Ambrose said. “It wasn’t our night.”

“Obviously we wanted the win, but it wasn’t meant to be.”

Not Surprising:  One driver was not only happy to be in the conversation, but has just been plain having fun as well. Dale Earnhardt, Jr. finished 14th in the No. 88 Diet Mountain Dew/National Guard Chevrolet and picked up the 7th place in the Chase.

“I’ve had an awesome time,” Junior continued. “It’s been so much fun.”