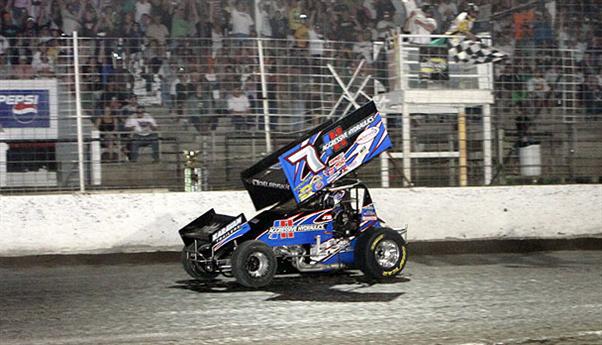 Qualifying offered a hint of what was to come when last nights 1st victim, Kerry Madsen set quick time. Madsen who had one of the scariest wrecks of the season last night at the Clay County Fairgrounds in Spencer Iowa, came out of the box like gang busters turning a lap of 11.884 seconds or 113.598 mph around the high banked 3/8ths mile dirt clay track. Joey Saldana who sat out last years race as a result of an injury suffered at Eldora timed in 2nd with Kraig Kinser and Sammy Swindell and Craig Dollansky rounding out the top 5. Once again missing from the top of the qualifying time list was points leader Donny Schatz who qualified 17th and seemed to struggle in hot laps and qualifying.

Heat races would be exciting in their own right as the well manicured track started to widen out and form it’s grooves. The first heat would see Dusty Zomer hold off a hard charging Jac Haudenschild. Also transferring to the A Main would be Kerry Madsen, Sammy Swindell, Davey Heskin and Lucas Wolfe.

The second heat race would be won by Chad Kemenah who held off a determined and fast Joey Saldana. Saldana who was undefeated on this track showed signs of being the dominate race car of the night but would come up a car length short after starting 4th. Also transferring to the Main were Cody Darrah, Donny Schatz Craig Dollansky, and Jody Rosenboom.

The third and final heat of the night would be a barn burner with Brian Brown setting the pace and Terry McCarl chasing him down from a 1.9 second lead at one point. Brown would hold off Knoxville’s 2012 champion by only .5 seconds. Also transferring to the feature were Jason Sides, Kraig Kinser, Mark Dobmeier and Steve Kinser who rallied back after an early race spin to take the final transfer position.

The dash had the top 10 fastest qualifiers of the night. Jac Haudenschild would charge from 10th to 3rd and finish 4th to put on an incredible display of driver skill and determination. The dash however would be won from the pole by Chad Kemenah with Dusty Zomer coming in 2nd and Craig Dollansky coming home 3rd.

The Last Chance Showdown was won by Justin Henderson who was followed by Brooke Tatnell Skylar Prochaska and Bill Rose. Ian Madsen and Matt Wasmund would also transfer to the Feature but would start at the rear of the field while the first 4 finishers would get their time back to start the A Main.

The A Main was a barn burner and arguably the best race of the 2012 season. But nothing comes without a cost. That cost was a wreck on the initial green flag that would see Bill Rose transported to the hospital for an apparent leg injury. At the time of this writing there was no further information available about Rose’s condition or the extent of the injury. After 3 attempts the A Main finally went green. But it went green without Cody Darrah who once again ended up on his lid and suffered too much damage to continue. The lead would be Chad Kemenah’s early on but he would lose it to Craig Dollansky on the 3rd circuit. Dollansky would dominate until late in the race when Donny Schatz cleared Joey Saldana in traffic and set his sites on Dollansky. Schatz would take the lead on the white flag lap and lose it again to Dollansky in traffic going into 3 on the final lap of the race. Schatz would be the KSE Hard charger of the race coming from 18th to 2nd in the 30 laps. Finishing 3rd was Joey Saldana and 4th was a badly smoking Jac Haudenschild. The race pole sitter Chad Kemenah would round out the top 5.

Craig Dollansky had perhaps the car to beat last night in Clay County when he tangled with a lap car and got into the wall. He returned to the track but could never climb out of the hole with the badly damaged machine. Tonight he left no doubt that he was the car to beat. At one point in the feature he lead by over 3 seconds. Dollansky was determined to climb back into the points chase and he put it all on the line. In the process he cut Schatz’s lead by 5 points going into Eagle Raceway in Nebraska. A track that has the reputation of being an anything can and will happen track.

Schatz’s points lead is a big one there is no doubt about that. But it’s not insurmountable. Things happen quickly with the World of Outlaws. Just like they can turn for the better they can turn for the worst. Dollansky is betting that he has the skills to match Schatz’s. He is betting that his Big Game Tree Stands team can prepare better and faster cars than the Tony Stewart Racing’s STP team can. He is gambling his shot at his first championship on it. Who will come out on top? We will know in 10 races. Right now the odds are in Donny Schatz’s favor. He has been down this road before. He has a big points lead. And he is on a roll. He has not finished outside the top 5 in 8 races. But can he ride the momentum? Can he hold on to the streak? Buckle in and hold on tight cause the next 10 races are going to be a wild ride.