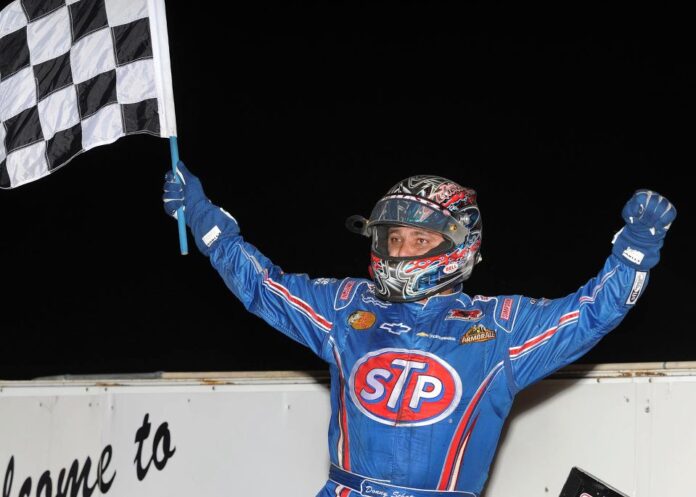 [/media-credit]Tonight the World of Outlaws rolled into Clay County Fairgrounds for the Arnold Motor Supply Shootout. Points leader Donny Schatz was riding the largest point lead of the season with a 72 point advantage over Craig Dollansky. Schatz recorded 4 top  5’s, 1 top 10 and 2 wins to take the points lead during the west coast swing and build tremendous momentum for the last 12 races of the season which includes the 4 crown nationals at Eldora. Schatz said of the momentum, “It’s important to be racing good at this time of the year. We’ve had the championship as a goal all season long, and there were times this season, when it didn’t look good, but the STP guys kept hanging in there. We found some things in our motor program right around the beginning of August and have been qualifying good ever since. When you qualify well, chances are you’re going to be starting closer to the front, but you have to take advantage of it. We’ve been a little lucky too, but winning right now is what we are all about. When we win, we try to enjoy it for a couple of hours, but know the next race we have to go back out there and do everything we can to put ourselves in a position to win again. Success one night doesn’t give you any advantage the next. Things can change quickly, so you have to stay on top of your game every night.”

The evening began rocky for the 4 time Outlaws champion as he qualified a disappointing 18th. Schatz said post race that they had chosen the wrong gear for the car and then he picked the wrong line in qualifying. Quick Time on the night would belong to Craig Dollansky who turned a blazing lap of 13.232 seconds or 102.025 mph around the 3/8ths mile track. Second would go to Sammy Swindell and third to Jason Sides. Former Rookie of the year Cody Darrah would nail down 4th and Brian Brown would complete the top 5.

The first heat would see a continuation of the resurgence of one of the biggest names in Outlaws racing when Jac Haudenschild took the checkers. He would be followed to the line by Skylar Prochaska and Craig Dollansky. Rounding out the top 5 in heat one and transferring to the A Main would be Davey Heskin and Kraig Kinser.

The 18th qualifying spot would take Schatz out of the heat race inversion and put him in the third row of the 2nd heat race. But when the green dropped Schatz was on the gas and quickly climbed into the 2nd spot behind team mate Steve Kinser to claim a spot in the dash. Sammy Swindell and the Knoxville Champion Terry McCarl along with Scott Winters would advance to the A main out of the 2nd heat.

The third heat race was a hard fought affair that would see an infrequent visitor to the World of Outlaws circuit take the checkers when Kayle Gharst held off a hard charging Jason Sides and Joey Saldana for the win. Also transferring were Dusty Zomer and Jody Rosenboom.

The final heat of the night would be won by Mark Dobmeier with Lucas Wolfe, Kerry Madsen, Cody Darrah and Chad Kemenah also transferring to the A.

The dash was full of big names and tough competition. Jac Haudenschild, Steve Kinser, Sammy Swindell, Craig Dollansky, Lucas Wolfe, Jason Sides, if Schatz was going to take this one he was going to work for it. His 2nd place finish in the heat guaranteed him a spot in the dash which assured him a top 10 starting position. But the further up he started in the A the better his chances would be.  As it turned out he would only climb to the 7th spot when the checkers fell. But it was far enough up to make him a player in the 30 lap A Main.

The Last Chance Showdown was a time of redemption for Brian Brown and Justin Henderson. Both had problems that kept them from either starting or finishing in their heat race. This was their last chance to make the trip count. And make it count they did. Brown would dominate the event with a 3.3 second lead at one point to win over Henderson Tasker Phillips and Chuck McGillivray to advance to the A.

The A Main was a 30 lap race of hard driving, hard charging young names with something to prove. Lucas Wolfe would take the early lead only to lose it to veteran Craig Dollansky. Dollansky would spin and hit the wall trying to avoid a spinning lapped car and relinquish the lead back to Wolfe. Wolfe would hold the lead until the next to the last lap when he got bottled up in lapped traffic and Schatz would drive by on the top. Schatz would never look back, leading the final two circuits on the 3/8ths mile semi banked track to take the double checkered flag for his 10th win of the season, and series leading 32nd top-five and 52nd top-10 this season. Schatz will pull into Deer Creek tomorrow night with a 101 point lead over Craig Dollansky with 11 races left in the season. Second place would go to Lucas Wolfe and third to Schatz’s team mate Steve Kinser. Craig Dollansky would return to the track after time in the work area but would finish a disappointing 17th. Showing the strength of consistency in the Main as well was Jac Haudenschild who again finished in the top 10. Kerry Madsen who flipped end over end violently on lap 17 and nearly clearing the fence and wall on the back stretch climbed from his car and walked away uninjured. Sammy Swindell would have engine problems and draw a 2 position penalty for exceeding the 2 minute open red work period and end up going to the work area. Swindell would make it back to the track but would finish 16th.

Donny Schatz never gave up. His night started far from ideal. But he believed he could make up the distance on the track in race conditions. His team stood behind him and pushed on. In the end when the double checkers fell, Donny had again stretched his point lead over Craig Dollansky to 101 points. But more than the points, Schatz and the team extended their confidence by knowing they could drive their way out of bad start. Persistence equals success. No matter what it’s in. If you do not quit. You will eventually come out on top. It’s something that Donny Schatz and his Tony Stewart Racing STP team have known from the beginning and it’s not something they will start doubting now.