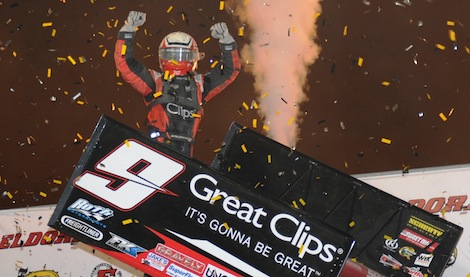 On Monday, Joey Saldana was released from his driving duties with the No. 9 Great Clips / Sage  Fruit / ASE sprint car for Kasey Kahne Racing, but will complete the remaining races on the World of Outlaws Sprint Car Series 2012 schedule in the car.

“While I’m disappointed to have been released by Kasey after seven seasons with the team, I’m thankful to Kasey and my crew guys for all their effort,” said Joey. “We  have won a lot of races together.”

While driving for  Kasey Kahne Racing, Joey has accomplished 77 total wins (70 of them being World  of Outlaws wins) and has finished second twice, third twice, and fourth twice in the World of Outlaws Sprint Car Series championship points.  He currently sits fourth in points with seven races remaining.

“I want to thank  all my fans for their support through the years and in the upcoming  off-season,” Joey remarked.  “I am hopeful to be back out on the World of Outlaws tour next year competing for a championship.”  No plans are in place with any team at this time.